Mücke on the podium at the 24 hours of Le Mans 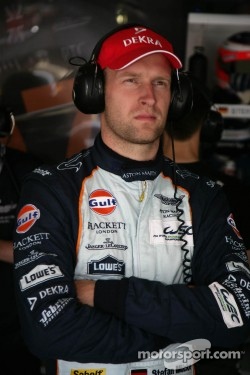 The 24 hour race of Le Mans ended on Sunday afternoon (17th of June) with the aimed podium placing in the GTE Pro Class for the German sports car pilot Stefan Mücke. The Berlin finished third in his class in front of about 250000 visitors together with his Aston-Martin factory driver colleagues Darren Turner (Great Britain) and Adrian Fernandez (Mexico) behind the wheel of the Vantage GTE. „I am really happy about my first podium placing at the most important and hardest car race of the world. It was very impressing to see all the fans and visitors from above for the first time“, Stefan Mücke said shortly after the award ceremony on Sunday afternoon.

„That’s been a hot race and driving on the limit the whole time, almost like it is at a sprint race. We are all happy about this position with the new Vantage in this hard fought class“, the 30 year old explained, who was on start at the 24 hours of Le Mans for the 6 th time, but had a premiere in 2012 anyway. For the first time he has been on start in a GT race car. The other five years he was behind the wheel of a LMP1 sports car prototype and in 2009 he was overall fourth (best German in the fastest of a Benzine car of the LMP1 sports car prototypes), which was his best placing so far.

This year’s race on the 13.6 Kilometre long track in North-western France was the third run of the new FIA World Endurance Championship (WEC) same time, where Mücke his colleagues started as well and finished third at the season opening in the middle of March at the 12 hours of Sebring (USA). Stefan Mücke started the race on Saturday afternoon (16th of June) in Le Mans from second position in his class and took the lead in the GTE Pro already after half an hour, before he assigned the Vantage to Darren Turner. Turner came on track again on second. After about five hours there has been a long Safety Car phase after a crash of two other cars, meanwhile Aston Martin Racing changed the brakes of the Vantage and Adrian Fernandez fell back from position three to six.

After that Stefan Mücke took the car again. He and Turner after him started a catch up race, which ended on second position at sunrise on Sunday morning. Stefan Mücke had one fast lap after another and came closer to the leading Ferrari – but then he slipped into the gravel pit in the Indianapolis curve and touched the tire-pile. „There was a problem the moment I hit the brakes and after that the rear axle was stuck“, the Berlin said. But he could drive back to the pit with the lightly damaged car. After about 15 minutes Fernandez came back on track on third position. Darren Turner and Stefan Mücke followed with each three hours driving time and held the third position in the Aston Martin with #97. The Berlin had the fastest lap time in the GTE-Class with 3:54,928 Minutes. About 1:30 pm Adrian Fernandez took the Vantage from the Berlin and passed the finish line with jubilations of the whole team on position three of the GTE Pro Class after 332 laps.