Loic Duval: We still have potential for improvement 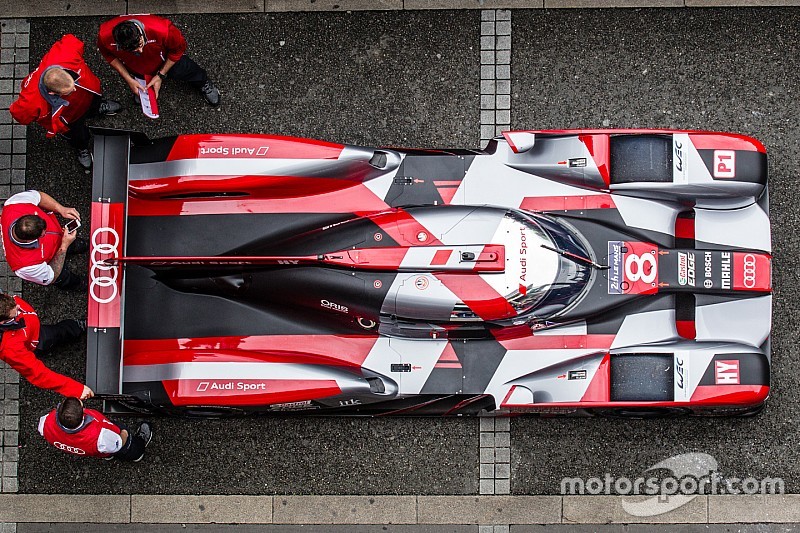 Coming off a win at the 6 Hours of Spa-Francorchamps in early May and having set the best overall time at last weekend’s Le Mans Test Day, Loïc Duval and his #8 Audi R18 crew-mates Lucas di Grassi and Oliver Jarvis, head to this year’s 24 Hours of Le Mans full of confidence.

Loïc, how important was it to set the pace on the official Le Mans Test Day?

It is not that crucial per se. But we’ve showed that we are in the mix, which is very positive. Even more so when you consider that everything was not perfect so we still have potential for improvement. The only downside came from the mechanical gremlins on the #7 sister car but the issue was identified and understood.

Your victory at the 6 Hours of Spa-Francorchamps could not have come at a better time?

It was the first win for Lucas, Olly and I as crew-mates and there is no better way to strengthen our team spirit. The trust we have for each other continues to grow. We really gained momentum over the course of last season and enjoyed a competitive second half, without any incident. Our success at Spa was deserved as it capped several months of strong performances.

What sort of race do you envision for this year’s Le Mans 24 Hours?

I really feel like we are in for a thrilling edition that will go down to the wire and reminisce of the Audi-Peugeot battle in 2011. Except that it’ll be a three-way fight this time. Manufacturers keep pushing the boundaries of technology in a bid to further improve performance. But that does not mean it would be wiser to play it safe. The car that goes flat out without any trouble will win the race.

What do you answer your crew-mates when they ask you about how a Le Mans win feels?

Winning Le Mans gives you very strong emotions, almost magical. My only regret is that our 2013 victory was naturally overshadowed by the passing of Allan Simonsen. We honoured his memory, which was absolutely the right thing to do. I’d like to win again and be able to celebrate fully, bursting with happiness on the podium.

What do you think about the addition of the SAFER barrier?

The alterations made to the Corvette corner are really beneficial and have not watered down the nature of the circuit, which is an excellent thing. I am much more in favour of this than having big tarmac run-off areas you see in other places, like at Tertre Rouge. These are forgiving, while the SAFER barrier system does not belittle the challenge.

Are you going to be the one qualifying the car?

Getting pole position at Le Mans is always a sweet feeling for the guy who clocked the fastest lap. That was the case for me in 2013. In our crew, the driver who feels the most confident on qualifying day will go for it. That said, even during quali sessions we tend to focus on preparing the race so claiming pole is not that crucial.

What makes Le Mans such a special event for you?

That’s where I made my karting debut on the Alain Prost circuit, and where I first drove in single-seaters at the Bugatti. I am still undefeated on that track by the way! Le Mans is an event where I can have all my family around. They are my all and everything, and I like to spend some time with them during race week. It helps clear my mind. Le Mans is pretty draining mentally so you need to escape from it a little. Actually, I will not be the only family member in action at La Sarthe this year. My wife Gaëlle, along with Romain Dumas’ spouse Elysia will be heading the Le Mans 24 Hours Women’s Pavilion.

Do you have any habits on a race weekend?

Since I was a kid, I always put on my left shoe before the right one, same with the gloves. I actually do the same thing with my kids’ shoes. In single-seaters I always climb into the car from the left side but this is more a habit I have kept from my karting days.

How do you manage your sleep during the race week at Le Mans?

I always sleep at the hotel except, of course, for the night from Saturday to Sunday. I try to get as much rest as I can, while the team’s doctor also devises a specific diet and routine to make up for any lack we might have.