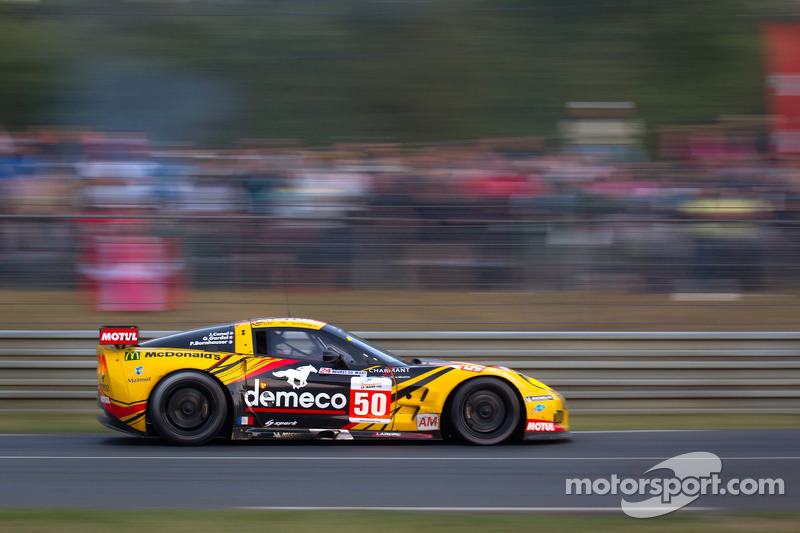 Larbre Competition continued their strong Intercontinental Le Mans Cup form at Imola in Italy last weekend where the squad’s Corvette C6.R finished second in the GTE Am class to extend the team’s lead at the top of the ILMC championship standings.

Julien Canal, Gabriele Gardel and Patrick Bornhauser were re-united behind the wheel of the #50 machine for the first time since dominating the Le Mans 24 Hours three weeks ago. Hot conditions, as well as the circuit’s stop-start nature, make Imola one of the most demanding venues on the calendar. Not that it affected the French trio who all once again produced error-free performances.

Having finished third on the road, the car was subsequently promoted to second place following a rival’s disqualification. That leaves Larbre Competition a substantial 27 points clear at the top of the GTE Am points table with three rounds still remaining. 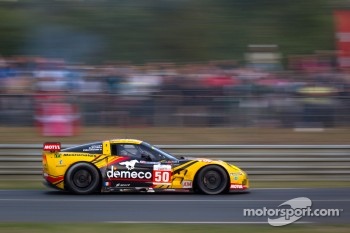 Julien Canal: “The outcome in Italy was very positive. I qualified the car for the first time this year and despite only having one lap in practice on new tyres due to the numerous red flags, I was able to set the fifth fastest time in GTE Am, running at the same speed as the GTE Pro entries at particular parts of the circuit. During the race, my two team-mates did an excellent job to hand me the car in third place. My first stint was quite difficult because the track temperature kept increasing and affected the tyre compound, which was no longer ideally suited to the hot conditions. After contacting Jack on the radio, we decided to choose a different compound which worked perfectly. That enabled me to catch the race leaders while building a solid advantage over the chasing AF Corse Ferrari behind. The team has done an excellent job to make the Corvette perfectly balanced. I had a great time driving it at Imola.”

Gabriele Gardel: “The team did an excellent job following the Le Mans 24 Hours to prepare the car for Imola. Our engineer Johannes Gruber devised a good set-up and the result was clear. I am really happy with all the team’s hard work, especially as not a single mistake was made during the weekend. The mechanics were really fast during the pit-stops. After Julien had qualified the car well I took the start of the race and immediately found a good rhythm to move up to first. Unfortunately I lost it just five laps before the end of my double stint before handing over to Patrick. I would like to thank my team-mates for their excellent work which allowed us to finish second. It’s a result that promises much for the rest of the season.”

Patrick Bornhauser: “This famous circuit, which I first discovered on foot with my team-mates, is not one of the easiest to learn. I only had two four-lap runs during first practice which wasn’t enough to fully learn and understand the layout. Then, in the afternoon, a monsoon drenched the circuit so we decided not to run which prevented any further time to learn. I did manage one ten-lap run in final practice and the times were quite promising. During the race, I double-stinted one set of tyres which was very rewarding, even if their compound was not ideally suited to the 45-degree track temperatures. Nevertheless, I ran third in class throughout before handing over to Julien. In the end we clinched second, which is a great result for everybody in the squad and allows us to increase our lead in the championship.”

Jack Leconte: “Following our recent one-two finish at the Le Mans 24 Hours, Larbre Competition’s objective was to consolidate our position in the 2011 Intercontinental Le Mans Cup standings. First of all, the team focused on improving the car’s set-up as we had only run the Corvette in three events at that stage. All the analysis work carried out post-Le Mans, where the car was considered not quick enough by Larbre’s team management, brought its rewards. The set-up devised for Imola, despite the loss of the second practice session following rain, was successful. Our average lap times in Italy were quite close to the factory Pro class cars. Our drivers also strongly appreciated the quality of those settings as it allowed them to run solid stints. We should now be close to our optimum performance as early as Silverstone. The technical team understands the car perfectly while reliability is also in place. Finally, our pit-stops were well executed which has given the team the solid foundations to defend their Intercontinental Le Mans Cup lead. A new world title is looking like a strong possibility. We will now prepare for the race at Silverstone and the overseas rounds in the USA this September before heading to Asia in November. Hopefully our first year in partnership with Corvette Racing will end with perfect and mistake-free results.”

Larbre Competition’s ILMC campaign continues in Great Britain on September 9-11 with the 6 Hours of Silverstone.