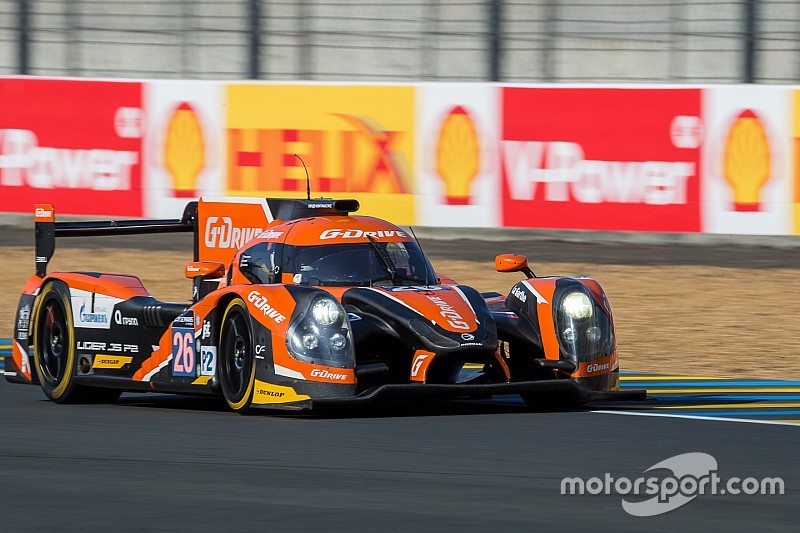 Both G-Drive Racing had an almost perfect race.

Both cars, built with Onroak Automotive chassis and shod with Dunlop tyres, had an almost perfect race, despite some small incidents, unavoidable in a 24 hour race, bringing home a podium and valuable points for the FIA World Endurance Championship standings.

In a race disrupted by 3 safety cars and countless yellow flags and slow zones, the two G-Drive Racing cars performed to their best, avoiding main incidents from start to finish. The weather in Le Mans was favourable, starting in warm and bright conditions, and only suffering about 30 minutes of light rain on Sunday morning.

This was the 4th time for me with G-Drive Racing in Le Mans so I am happy to get podium back for the Russian team!

The G-Drive Racing cars qualified in 2nd and 9th on Thursday, with Sam Bird in the #26 starting on the front row of the LM P2 class and Pipo Derani taking the start in the #28 a few rows further down the grid.

The race got off to a very clean start, without any incidents for the first hour. When the green flag fell, Sam Bird got caught out by the Gibson and Oreca cars around him and fell back a few positions down the field, but he kept a steady pace, keeping up with the peloton, and ended up in 3rd after the initial shuffle. Derani, in the #28 G-Drive Racing car managed to hold onto 9th and started to work on climbing up the field.

The drivers of the #26 G-Drive Racing held onto third until the 3rd hour, where a small starting fire during a pit stop refuelling cost them a few places, and they rejoined the race in 6th in LM P2. The trio did a good job and worked to climb back up the field as the sun was setting. With the retirement of the #46 Thiriet by TDS Racing Oreca 05 in the 14th hour, they reclaimed 2nd LM P2 place. The team then focused on keeping up with the leaders, the #47 KCMG Oreca 05.

In hour 19, the #47 went off the track, and it looked as though the #26 could take advantage of this and claim the lead, but the #47 managed to rejoin, and keep a sufficient enough gap to stay well ahead of Julien Canal who was doing his best to catch him. The LM P2 leaders made another mistake in the 22nd hour, but it was still not enough for the #26 to catch up. The last hours came down to pit stop strategy, with the #38 Jota Sport Gibson catching up and eventually overtaking the #26 to take 2nd in class. The #26 fought to keep up, but ended the race in 3rd in class.

The race for the crew of the #28 G-Drive Racing was well managed and they had a nearly flawless race, apart from a couple of stop&go penalties, both due to speeding in the pit lane. The first one hit hardest, as it happened in the 2nd hour of the race when the cars were still on the same lap, so it cost them a few places. Gustavo Yacaman, Pipo Derani and Ricardo Gonzalez worked hard though the night and managed to make their way back up the field, and avoid any incidents to make up for that first small mistake.

The 2nd penalty came at the end of the 21st hour, as they were racing up in 5th in LM P2. With a 6 lap lead over their nearest competition, they didn’t risk losing any positions. They fought for position against the #34 OAK Racing Ligier JS P2, but when they had to retire due to a gear box issue, the crew of the #28 G-Drive Racing claimed 4th LM P2 place for themselves.

G-Drive Racing are very pleased with their result, as this will of course mean very important points for the FIA WEC championship, as KCMG are one of their closest rivals. They have currently lost the lead in the points, but the important points collected today will help towards the rest of the season.

Philippe Dumas, Team Principal: “I’m obviously torn between the disappointment of not winning this unique race that everyone want to win and a really good overall result by finishing 3rd -4th in class and taking points for 2nd and 3rd in the WEC LM P2 classification. Le Mans is Le Mans and to get to the end is an exploit in itself. We have to be satisfied with this result. We also need to congratulate our rivals. “

Sam Bird, #26: “So we’ve just finished the 24 Hour Le Mans race, and I’ve got to say that it’s probably the hardest race I’ve ever taken part in. The boys and girls at G-Drive Racing, and everybody here did a really good job, they’re faultless. They made sure the cars were immaculate all week and fast. Just not fast enough in a straight unfortunately for this event. It’s a long championship and a podium is an amazing achievement here. So congratulations to everybody. “

Roman Rusinov, #26: " This was the 4th time for me with G-Drive Racing in Le Mans so I am happy to get podium back for the Russian team! Despite all the difficulties we'd get points and good results in overall. So I am very happy to see the Russian flag in Le Mans again. Big thanks to all the fans - it couldn't happen without your support. Thanks to all the team members - great job! Looking forward to the next battle. "