Level 5 at Le Mans: The race after the race

The 2013 24 Hours of Le Mans is now in the record books and we are concluding our in-depth look at the work that goes into fielding a world-class entry with our final installment that takes place once the checkered flag waves.

Le Mans, France -- Once the checkered flag waves, the month-long adventure that is the 24 Hours of Le Mans comes to an end. But for Level 5 Motorsports, the work is far from over, as the LMP2 championship-winning organization finds itself in a race against the clock to make it back Stateside and on to the next American Le Mans Series presented by Tequila Patrón race.

With only 10 days until the start of practice for the Northeast Grand Prix at Lime Rock Park, planning and executing a quick and efficient turnaround of both crew and equipment from France becomes the key focus post-race, even with an exhausted team that’s been up for more than 40 hours.

"Post-race, the car goes to Parc Fermé and it can sit for up to three hours,” Level 5 Crew Chief Ken Swan explains. “I think last year, we finally got our car back around 7 or 8 pm. You have guys that are just dead tired after being up all night, really. You get the car back, go to the hotel and the next morning, you're back at the track at 9 am to load everything up.” 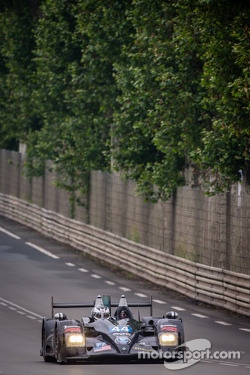 As was the case one month ago, the entire Level 5 kit, from torque wrenches to massage tables, is carefully packed into 33 custom-built shipping containers for the transatlantic journey back home. Led by the logistics team of crew chief Swan and logistics manager Charissa Cobb, every single nut and bolt must be accounted for on the team’s shipping documents in order to successfully clear customs. And this time, there’s no room for error, given the the tight turnaround time.

“Anything can happen in customs,” Swan says. “We thought about shipping everything to Lime Rock and prepping a little bit in Le Mans but there's just too many potential issues with customs and items getting delayed or not making it. Something small that they may not like on the carnet could delay the shipment for days. Luckily, we haven’t had any of those issues for the last three years we’ve been doing this as we are very thorough. But you still have to be very careful of what gets loaded, especially after a 24-hour race. A can of WD-40 getting thrown in a toolbox can stop your whole shipment.”

Once everything’s packed up, more than 15 tons of equipment, including both Honda Performance Development ARX-03b race cars, are transported via truck to London and then a 4,000-mile flight to Chicago before returning to Level 5’s Madison, Wis. shop. The crew, meanwhile, flies back on Tuesday and virtually has no time off, as preparations for Lime Rock begin the following day, with equipment expecting to arrive on Thursday for the quick turnaround.

Luckily the crew will only have to prep one car, as the additional HPD ARX-03b that was brought to Le Mans for the test day was prepared for Lime Rock while in France. It means all hands will be on deck to tear down, repair and rebuild the battle-scarred Le Mans race car, while also prepping spare parts and additional equipment for the upcoming ALMS race.

“Once the second car leaves France, it will be ready to go to Lime Rock, so that way we can have everyone jump on the Le Mans race car because who knows what can happen after 24 hours,” Swan says. “You can pretty much expect to strip it down to the tub, bolt new suspension on, put on a new floor, new bodywork and a new steering rack. All of that has to happen in three days.

“However, you also have to unload crates and load up war wagons and make sure you have everything for Lime Rock. It's a lot of work to get done. You have to figure that all of the bodywork you ran in the race at Le Mans is going to get trashed. So when we go into Lime Rock, you may see some bodywork that Level 5 wouldn't have had.”

By the evening of June 30, everything has to be loaded into Level 5’s two transporters for the 1,000-mile cross-country trip to Lakeville, Conn. the following day, completing the “race after the race” for America’s globetrotting LMP2 team. So when you see the pair of HPD ARX-03b race cars and drivers Scott Tucker, Marino Franchitti and Ryan Briscoe at Lime Rock, know that it took sleepless nights and key expert coordination to bring a slice of Le Mans back to the U.S.

MacNeil has educational Le Mans 24 Hours in the WeatherTech Corvette