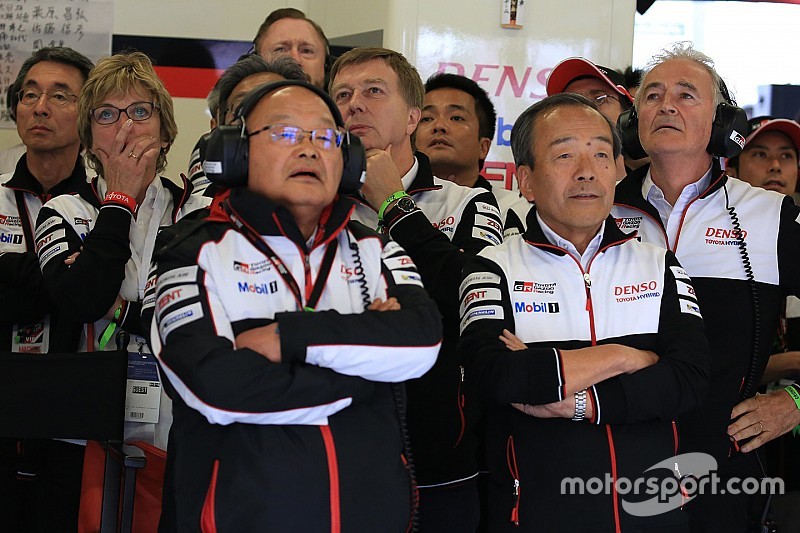 Porsche driver Neel Jani admitted he was "heartbroken" for his Toyota rivals after the Japanese manufacturer lost out on what had looked to be a certain first Le Mans 24 Hours victory.

Jani, who ended up taking the spoils in the French endurance classic alongside teammates Marc Lieb and Romain Dumas, was at the wheel of the #2 Porsche 919 Hybrid when it took the lead from the ailing #5 Toyota at the start of the very final lap of the race.

The lead TS050 Hybrid, with Kazuki Nakajima at the wheel, had well over a minute in hand over the #2 Porsche before it began to slow dramatically on the penultimate lap with a loss of power, finally coming to a halt on the main straight at the start of the final tour.

Jani said it had been Porsche's strategy to keep pushing hard, so as to not allow Toyota the chance to back off, although he said it was impossible not to feel for his rivals.

"It was basically a 24-hour hunt," said Jani. "With all the slow zones and safety cars, it was crazy, we were always within 15-20 seconds [of the leading Toyota].

"Then at the end we lost 20 seconds in a slow zone, so we thought: 'let's keep the pressure up on them' so they can't turn things down, and they have to push to the very end. You never know what happens.

"I would love to say, 'luckily something happened', but you can't say that – it was the last lap and you have to feel heartbroken for them.

"And that's not being sportsmanlike, that's just being human."

Asked if he had expected Toyota to be such a formidable rival in a race for which Porsche was considered a narrow favourite, Jani said: "They had the advantage of running 14 laps [a stint] to our 13, so we knew we had to be a bit quicker.

"We thought everywhere we would be a little bit quicker, but out main advantage was in the night, when we gained [the equivalent] of a pitstop.

"As soon as the sun came out, it was more or less the same pace. That's why it was so close.

"We pushed all the way through the race, we were very unlucky in the first stint with the rain tyres, which didn't work out as well.

"So we were a little on the back foot, but we always kept the pressure on them."

Describing the dramatic closing moments, the Swiss driver added: "I was told on the radio that [the #5 Toyota was] losing power, and to 'push, push, push'.

"We had new tyres, so I thought 'OK, we will push.' At that stage, we had to come in for new tyres just for safety because we were so on the limit that we couldn't risk it.

"It was losing air apparently, but the tyre was shattered from pushing so much. I didn't look after that [set], I just went for it."