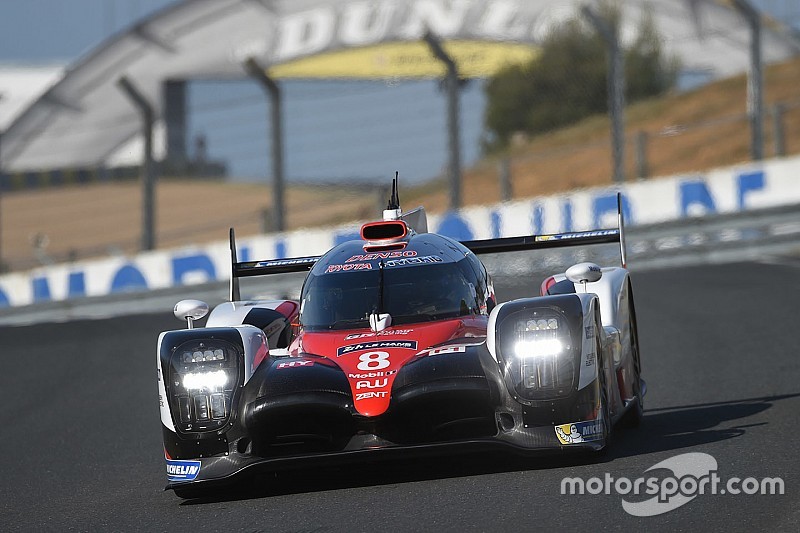 Toyota led the way in the opening session of the official test ahead of the Le Mans 24 Hours later this month.

Kazuki Nakajima posted a 3m20.778s with just over 20 minutes of the four-session to go to cement the position of the #8 Toyota TS050 Hybrid at the top of the times.

His time of 3m20.778s eclipsed Sebastien Buemi's previous best in the same car by just over 1.5 seconds.

The other two Toyotas subsequently improved their times to go second and third.

The two Porsche 919 Hybrids ended up fourth and fifth, although Timo Bernhard had been second in the #2 car until the late flurry of hot laps from Toyota.

Nakajima's time put him within a second of last year's pole set by Porsche driver Neel Jani, despite new aerodynamic rules devised to keep a cap on falling lap times.

Signatech Alpine driver Andre Negrao led the way in LMP2 on his first experience of the 8.47-mile Le Mans circuit.

The Brazilian became the first LMP2 driver to break the 3m30s barrier with a 3m29.809s set aboard the #35 Signatech Oreca-Gibson at the end of the four hours.

That put him seven tenths up on the #13 Rebellion Racing Oreca in which Mathias Beche had led the way in class for much of the session.

The Swiss driver's a 3m30.516s was almost matched by Richard Bradley in the best of the French Graff team's Orecas right at the end.

Oreca swept the top 13 positions in class, the best of the rest being the United Autosports Ligier in the hands of Filipe Albuquerque in 14th.

The new breed of P2 cars, which have an extra 100bhp over their predecessors, are already nearly seven seconds quicker than last year's P2 pole set by G-Drive Oreca driver Rene Rast.

Chevrolet just edged out Porsche in GTE Pro, as Jan Magnussen ended up fastest in the the #63 Corvette Racing entry with a 3m55.726s.

The second of the factory Chevrolet Corvette C7.Rs was a further half second behind on a 3m56.290s in the hands of Oliver Gavin.

The best of the Aston Martin Vantage GTEs was fourth with a 3m56.753s set by Daniel Serra, while the best Ford GT was the #67 car, which Harry Tincknell put sixth with a 3m58.251s.

The Proton Porsche squad led the way in GTE Am, Matteo Cairoli's 3m59.117s aboard the #77 entry giving him an advantage of one tenth over Andrea Bertolini in the AF Corse-run DH Racing Ferrari.

Corvette Racing at Le Mans: All about preparation