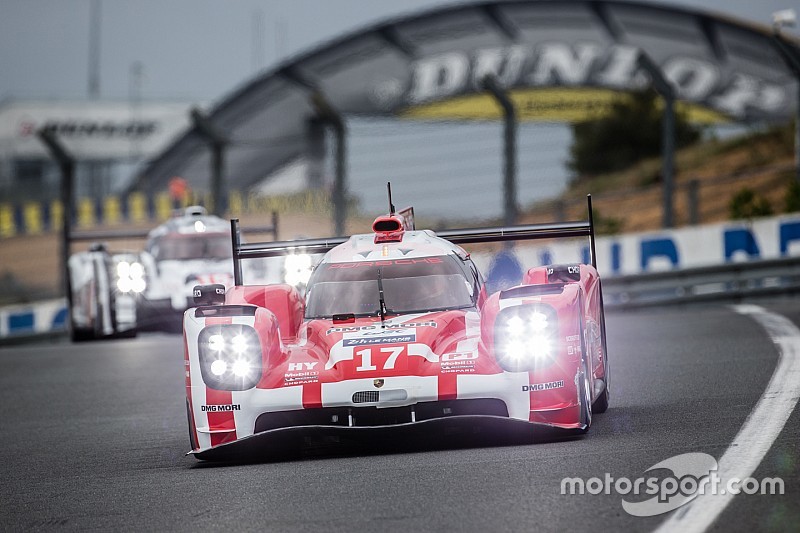 Rain blighted the opening morning of the 2015 Le Mans 24 Hours Test Day, but not before Porsche had topped Audi for the fastest time.

Within 20 minutes of the green flag, and rain threatening, Andre Lotterer set the pace with an already-significant 3m25s lap. The Audi driver then beat the quickest lap of the 2014 Test Day, lapping in 3m22.930s as the track began to clean up.

His leadership was short-lived for, less than a minute later, Neel Jani crossed the line in 3m21.945s at the wheel of the #18 Porsche 919. This proved to be a Test Day record, only two tenths off Kazuki Nakajima’s pole position last year with Toyota.

This first showdown on track confirms that the race might be an Audi/Porsche duel in terms of performance. The first Toyota is only seventh fastest, behind all the Audis and Porsches, with a 3m26.929s lap for car #2 that is nearly five seconds off the fastest time.

There was a warning sign for Porsche a couple of minutes before the end of the morning session when the #19 car, then driven by Nick Tandy, slowly went back to the pits with a mechanical issue.

Nissan has slowly been learning the track. The radical front-engined, front-wheel-drive GT-R LM Nismos have completed a total of 52 laps.

Its fastest time was set by Olivier Pla at the wheel of #23 in 3m43.383s. That’s slower than both Rebellion R-Ones which, for their first outing of the year, sandwich the Team ByKolles’s CLM.

It is worth noting that the #22 Nissan caused the first red flag of the day at 10:04am, running slowly in the Dunlop chicane on an outlap. Despite the interruption of the session, it was able to go back to the pits with Michael Krumm at the wheel.

As planned, Nissan has also been using the Ginetta-Nissan LMP3 so that its rookie drivers Max Chilton, Alex Buncombe and Tsugio Matsuda are able to run their required 10 laps to qualify for the race.

After the first-hour rush, the rain arrived and didn’t stop until the lunchtime chequered flag. Another red flag was brought at 11:50 by a puncture of the Team ByKolles LMP1, then driven by Tiago Monteiro. There also was a slow zone practice during the third hour.

On a very wet track, the teams continued their programme with laptimes that were about 30 seconds slower than in dry conditions in LMP1. If laptimes do not improve significantly by 6pm, it will be very hard to draw conclusions out of them.

In LMP2 the #34 Ligier run by OAK Racing was fastest before the rain with a 3m41.919s, leading the Alpine and the KCMG-run Oreca.

In the GT categories, Corvette is leading with the #64 car in the LM GTE Pro class, while the #61 Ferrari AF Corse is leading in LM GTE Am.