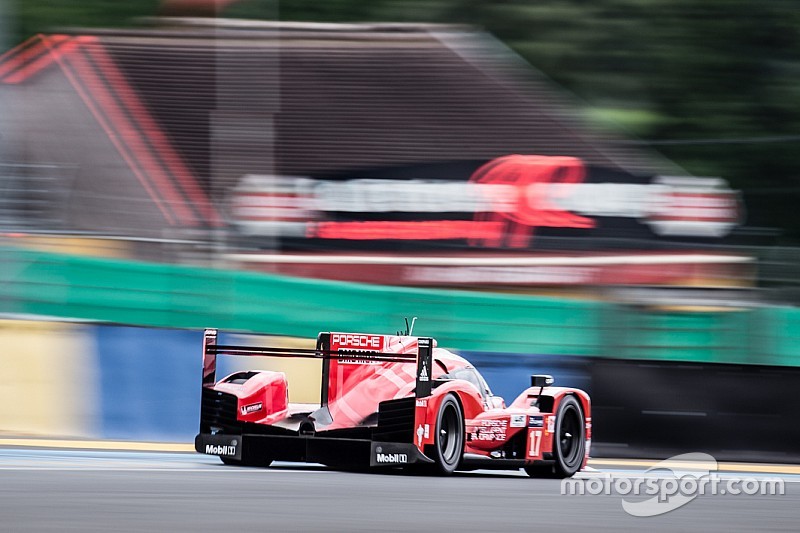 Porsche topped a rain-affected Test Day ahead of the 24 Hours of Le Mans on Sunday, outpacing rivals Audi and Toyota with a lap faster than last year's pole position time.

Porsche, chasing its 17th Le Mans victory, gave notice of intent early on when Neel Jani set the benchmark with a 3m21.945s lap in the #18 Porsche during the morning session before rain soaked the track.

In the afternoon session, the track soon dried out. At the end of the first hour, Brendon Hartley went under Jani’s morning time, stopping the clocks at a 3m21.061s.

It was however a brief window of dry running as the rain returned, scuppering a likely rapid descent of the lap times. With more favourable conditions times are expected to dip below at least the 3m16s mark in full qualifying spec.

Audi covered the most combined laps (288) of the top three manufacturers during the day as they continued to gather valuable data. The #9 Audi R18 e-tron quattro led the chase of the Porsches with Marco Bonanomi registering a 3m22.307s lap to claim P3 with a time set in the morning.

The Italian will be aiming to banish the memory of last year's race when he was unceremoniously spun out of the race by Nicolas Lapierre’s Toyota.

Formula 1 ace Nico Hulkenberg made his La Sarthe debut and quickly got up top speed, but it was his teammate Nick Tandy who set the fourth fastest combined time on 3m22.322, just 0.015s behind Bonanomi’s Audi.

Toyota were some way back from the Audis and Porsches, with its best time set by the fully-recovered Kazuki Nakajima on 3m25.321s in the afternoon session. But this was some 4.2s off the ultimate pace.

The reigning WEC champions made plenty of changes to its pair of TS 040 HYBRID challengers, but as with the majority of the field they were unable to accurately evaluate its programme effectively in the changeable conditions.

Nissan quickest through the speed trap

The three Nissan GT-R LM NISMO entries finished the day well down the order but the most talked-about car in this year’s race managed a good amount of combined laps (111).

As expected, its radical LMP1 design was the quickest through the speed traps during the day, with Olivier Pla being registered at 208mph on the Mulsanne Straight in the #23 car. This was just under 2mph quicker than the #7 Audi R18 e-tron quattro driven by Andre Lotterer.

The Nissan's performance cannot be fairly evaluated though, due to a combination of the inclement weather and the continuation of its extended test programme.

All three of the entries had some technical issues during the running, two of which briefly stranded the #22 and #23 cars out on the circuit in the morning session.

They also lost some track time while adjusting the rear-view mirrors on the car at the behest of the ACO. Once this was completed the team was frustrated by the weather, which compromised plans to evaluate different Michelin tyre compounds during the afternoon.

There was an impressive start for the new-look Rebellion R-One/AER car as they placed ninth and 11th in the LMP1 class. The ByKolles entry, which also uses an AER turbo engine, suffered damage after a puncture at Indianapolis and did not take part in the afternoon running.

In LMP2 the fastest time was set by class debutant Laurens Vanthoor in the #34 Oak Racing Ligier-HPD. The  car soon hit problems however, and was forced to have an engine change at the beginning of the afternoon.

The LMP2 class looks to be as fiercely fought as its bigger brother LMP1 class, with seven different chassis constructors filling out the top seven positions in the afternoon session.

Aston top of both GT classes

Aston Martin Racing ran out quickest in the LMGTE Pro class, with the Darren Turner, Stefan Mucke and Rob Bell Vantage V8 setting a 3m58.069s in Turner’s hands. This eclipsed the #64 Chevrolet Corvette of Oliver Gavin, who set a 3m59.162s in the morning.

Current FIA WEC points leaders Matthias Lauda, Pedro Lamy and Paul Dalla Lana ultimately headed the combined session times though, with Lamy the only driver to dip under the four-minute barrier on a 3m59.338s.