Motorsport is a numbers game. Think hours, minutes and seconds (and fractions thereof), laps, points, miles an hour, whatever.

It is a realm awash with records, but at few events do they take on as much significance as the Le Mans 24 Hours. It's a race steeped in history where the numbers are big and records long-lasting.

Here are a few of those historical marks concerning time, speed and distance.

The quickest ever lap 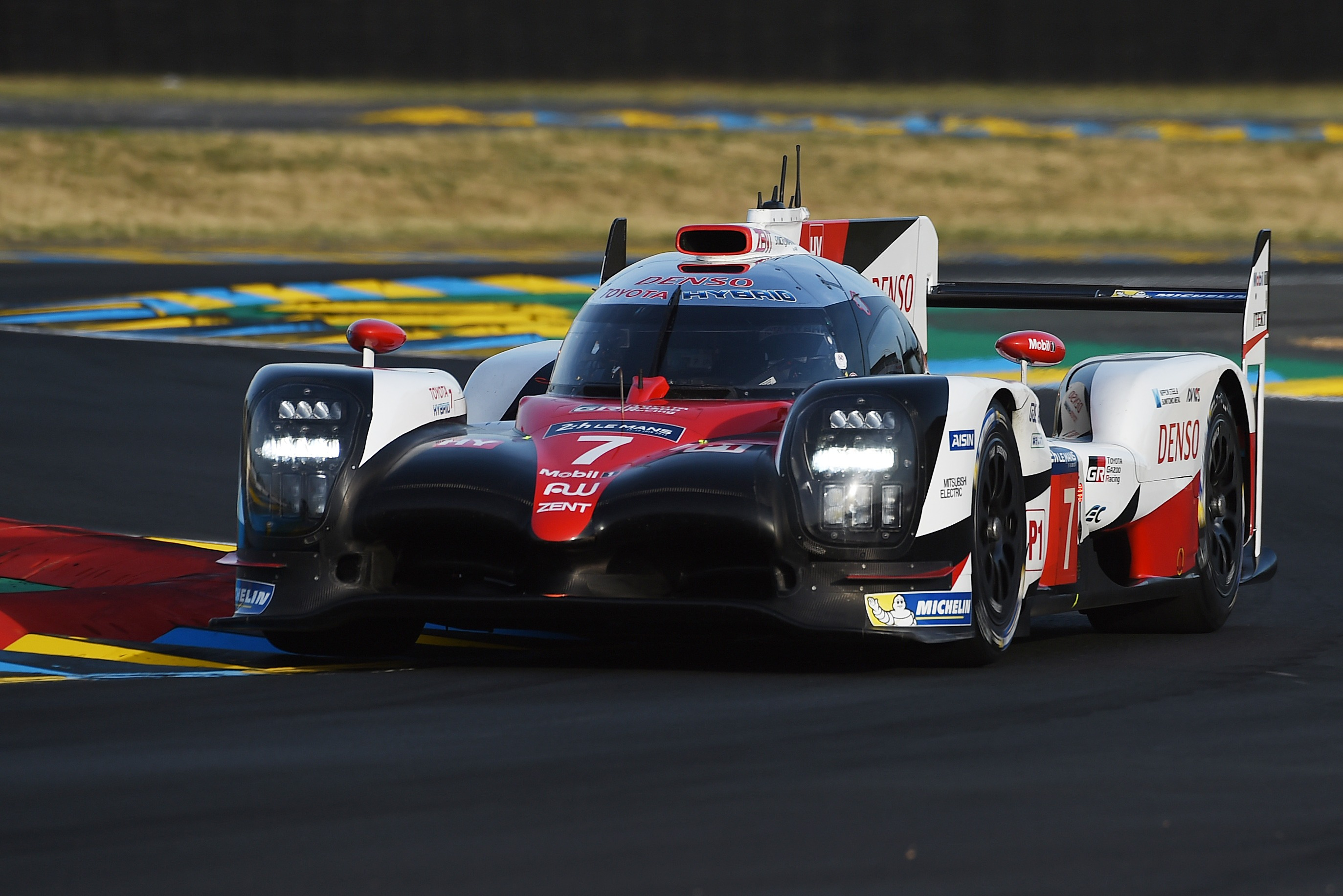 Current Toyota driver Kamui Kobayashi holds the record for the fastest ever lap of the majestic Circuit de la Sarthe, a track incorporating sections of public road along a course measuring nearly eight and a half miles. He hit the headlines aboard the #7 Toyota TS050 Hybrid back in June 2017 with a pole position lap of 3m14.791s because it surpassed a mark that dated back more than 30 years.

Kobayashi's average speed of 156.512mph eclipsed Hans Stuck's lap of 3m14.8s at 156.470 mph lap with which he took pole for the 1985 race driving a factory Rothmans Porsche 962C. The two-time Le Mans winner's unofficial lap record stood for so long because of drastic changes to the circuit that followed in the years after.

A chicane was added on the exit of the Dunlop Curve, the fast right-hander straight after the pits, for the 1987 edition of Le Mans. The character of the track and the race was subsequently changed forever three years later when the four-mile Mulsanne Straight, once the main route between the cities of Le Mans and Tours, was dissected by two chicanes.

Kobayashi's lap may be the fastest ever around the full circuit at Le Mans, but it is not the quickest. And by that we mean the shortest in terms of elapsed time.

Jackie Oliver took his JW Automotive Porsche 917LH around in 3m13.6s at the official Le Mans test day in April 1971. That represents an average speed of 155.626s mph. The maths is correct because the Circuit de la Sarthe was significantly shorter back then.

The 1971 edition of the race was the last before the Porsche Curves replaced the near-flat Maison Blanche section that led the cars back onto the start-finish straight. What the ACO labels the fifth version of the Circuit de la Sarthe measured 8.37 miles compared with the 8.47 miles of today's circuit number 15. All those chicanes have added length, too.

The fastest lap of the track after the Porsche Curves were built and before the chicanes were added to the Mulsanne was a 3m21.27s from Alain Ferte in a Jaguar XJR-9LM in 1989.

A record that had stood for nearly 40 years was finally eclipsed in 2010. Romain Dumas, Timo Bernhard and Mike Rockenfeller nibbled past a mark that had remained intact since 1971 at the wheel of their factory Audi R15 TDI-plus.

They equalled the number of laps completed by Helmut Marko, today boss of Red Bull Racing, and Gijs van Lennep, but as we have seen already the Circuit de la Sarthe had grown in length in the intervening years.

The 397 laps Marko and van Lennep completed at the wheel of their Martini Racing Porsche 917K of the 8.37-mile circuit added up to a shade over 3322 miles, whereas the same number of tours around the revised track measuring 8.47 miles made for almost exactly 3362 miles 39 years later.

The closest anyone has come to breaking the record in the years since 2010 came in 2015 when the Porsche 919 Hybrid shared by Nico Hulkenberg, Nick Tandy and Earl Bamber took the chequered flag at the end of the 395th lap. The winning Toyota TS050 Hybrid has respectively competed 388, 385 and 387 laps over the past three years.

Records are there to be broken, but this one might stand immemorial. Toyota stood up and said it was targeting the record in 2018 when it first went to Le Mans as the only manufacturer racing in the LMP1 class. It ultimately fell short by nine laps at the end of a race in which neither of its cars suffered any major delay.

The 2010 edition of the race was completely dry, the most significant problem encountered by the winning car was the replacement of a wing mirror removed by a tumbling cameraman in the pitlane, and there were just four safety cars. It was also before the introduction of the so-called slow zones, a prodigiously-used measure to slow the cars to 80km/h, a tad less than 50mph, under virtual safety car conditions in prescribed areas.

Toyota won't be setting any such targets this time. It's unlikely that this year's winner will come anywhere close to the record: the cars will be going 10s a lap slower with the introduction of the new Le Mans Hypercar category in place of LMP1.

The widest margin of victory 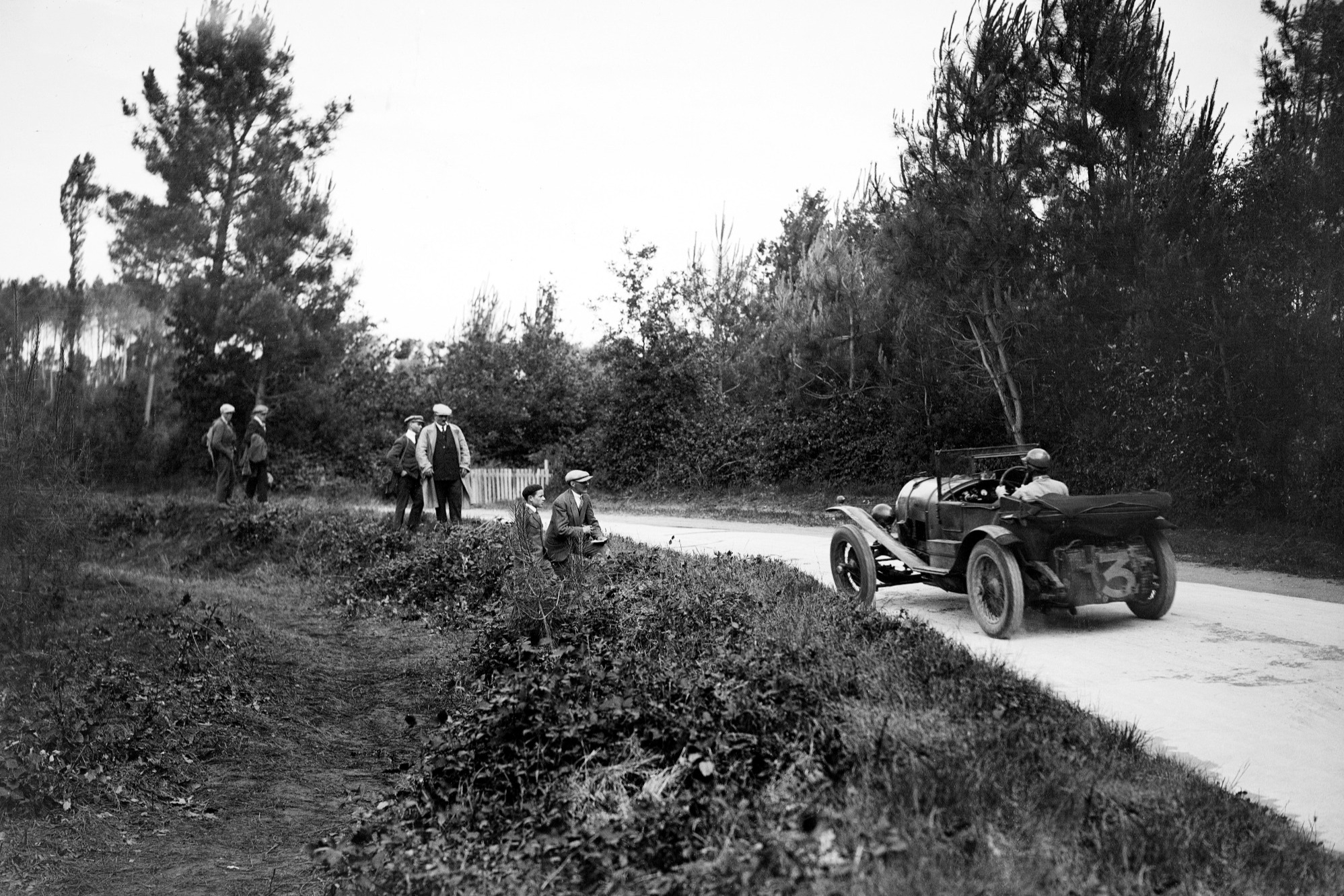 Davis and Benjafield crushed the opposition in 1927

Bentley took the second of its five victories at Le Mans in 1927 by a whopping 20 laps. The works Bentley 3 Litre Sport driven by Sammy Davis and Dudley Benjafield managed to lap the Circuit de la Sarthe 137 times in the 24 hours, the second-placed Salmson Grand Sport only 117 times.

That adds up to more than 200 miles of a track that back then took the cars deep into the city of Le Mans on its 10.72-mile course. Given that lap times were some way above eight minutes, the winning car was in the region of two and half hours ahead! 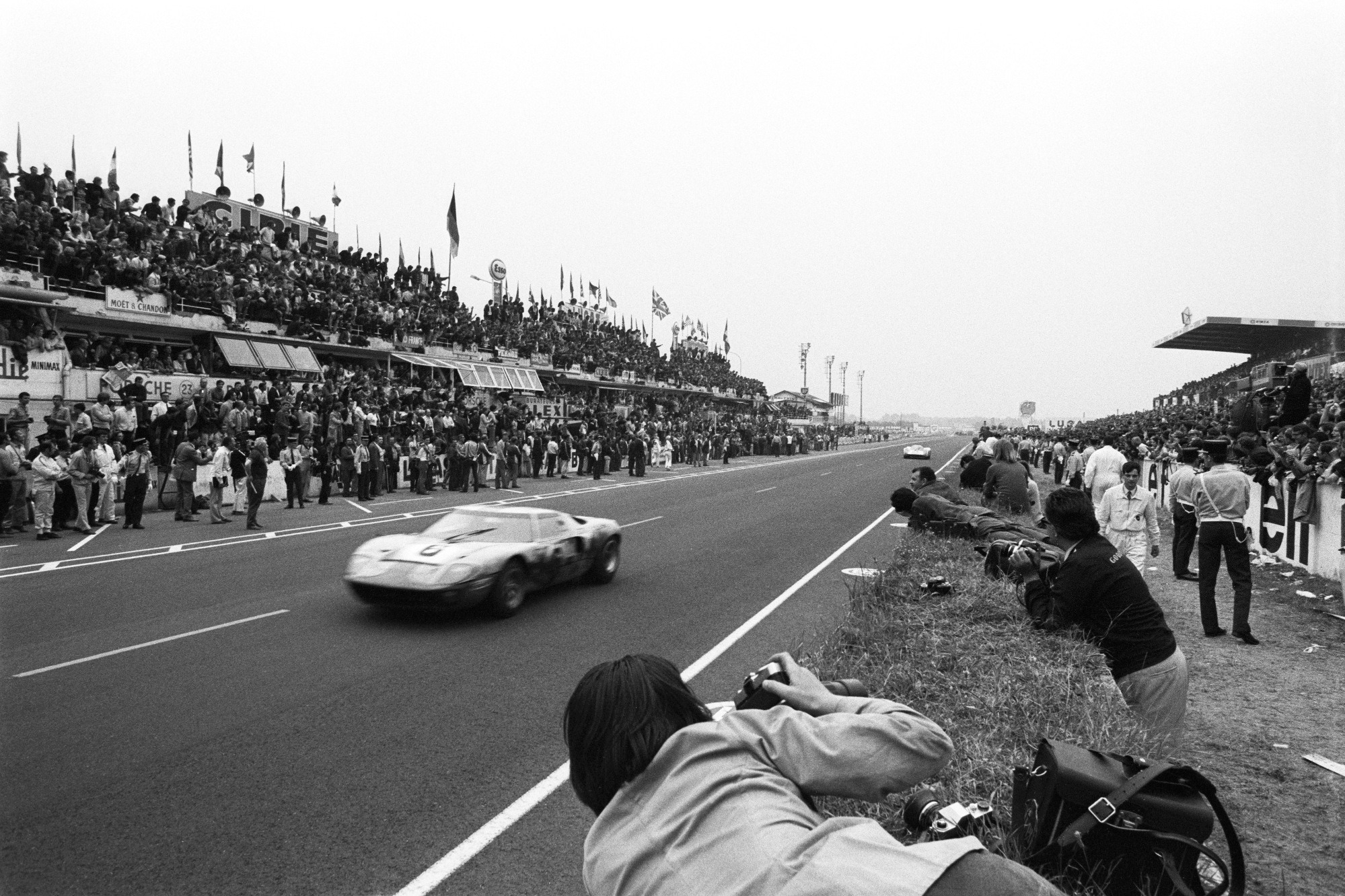 A margin of victory used to be declared by race organiser the Automobile de Club de l'Ouest in metres at the end of each edition of the race. The record was set in 1966 in what was a staged finish by Ford. The official margin of victory for the Shelby American Ford MkII shared by Kiwis Bruce McLaren and Chris Amon is listed as 20 metres over the sister car driven by Denny Hulme and Ken Miles.

Photographs from that year of the cars crossing the line suggest it was much closer than that, but the official margin reflected the distance between them on the grid. The winning Ford started fourth, the runner-up car second.

The closest competitive finish came three years later when Ford claimed the last of its four victories on the trot. Jacky Ickx finished, according to the official ACO statistics, 120 metres ahead in the Gulf-liveried JW Automotive GT40 he shared with Jackie Oliver. The Belgian, who would go on to become a Le Mans legend, had swapped positions with Hans Hermann in the second-placed works Porsche 908LM co-driven with Gerard Larrousse multiple times over the final two laps.

The closest timed finish in Le Mans history came in 2011 when the winning Audi R18 with Andre Lotterer at the wheel crossed the line 13.854s seconds ahead of the chasing Peugeot 908 driven by Simon Pagenaud. This counts as the fourth-closest finish, just eclipsed by the official 401-metre winning margin in 1933 between two Alfa Romeo 8C-2300s. 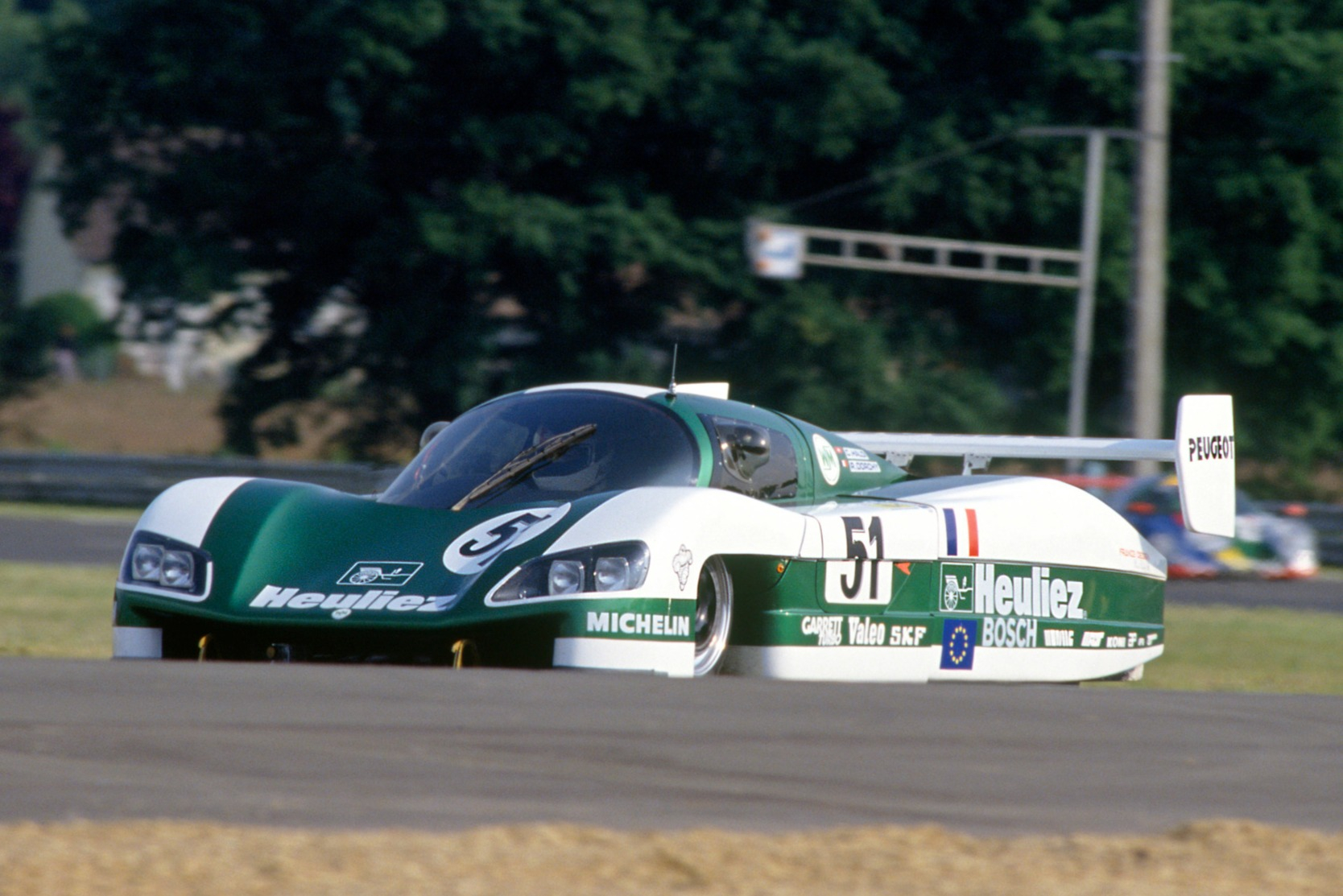 The fastest speed achieved on the Mulsanne Straight was set back in 1988, two years before the addition of the chicanes. The record books list the official mark as 405km/h — a scary 251mph — posted by Roger Dorchy at the wheel of a WM-Peugeot P88 Group C car, but the slippery machine with the boost knob turned up to 11 actually flew through the speed trap a couple of clicks quicker.

The French team, mostly made up of Peugeot engineers and technicians working in their spare time, agreed with the ACO that they'd declare the speed at 405 rather than 407km/h in deference to their employer. It was the launch year of the new Peugeot 405 four-door saloon.

Long-time WM technical director Vincent Soulignac believes that Dorchy achieved an even higher speed the year before driving the previous-generation WM. He puts forward evidence based on gear ratios and engine revs to claim that the WM hit something approaching 420km/h in a year when the speed gun in use wasn't capable of measuring the dramatic speeds the WM was attaining.

A few weeks before Le Mans that year, the P87 WM achieved 416km/h or 258mph on an unopened section of autoroute in the hands of ex-Formula 1 driver Francois Migault. That run was completed without the use of pukka race fuel, which Soulignac reckons proves there was more to come.