After the opening qualifying session on Wednesday night was red-flagged and then halted early after an accident that damaged a Mulsanne Straight barrier, drivers eagerly returned to the legendary 8.469-mile (13.629 kilometers) course. That included 33 drivers from the American Le Mans Series (ALMS) presented by Tequila Patrón and the GRAND-AM Rolex Series. Eagerness was tempered though when another wreck – this one by Matt Downs in the No. 40 Oreca LMP2 entry – again damaged a barrier, necessitating repairs and stopping the first session a half-hour early. That led to adding a half-hour to the event’s final qualifying session, making it a two-hour, 30-minute affair. 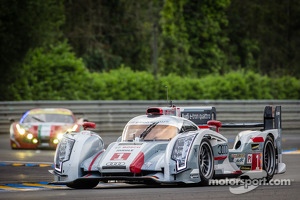 When it was done – after yet two more red flags due to accidents – the lap of 3 minutes, 22.349 seconds (150.68 mph/242.4 kph) by Loic Duval on Wednesday night had held up, giving the overall and LMP1 class pole to the No. 2 Audi R18 e-tron quattro of Audi Sport Team Joest. The No. 2 Audi R18 is favored to say the least, with Duval joined by eight-time Le Mans champion Tom Kristensen and two-time champion Allan McNish.

As for the highlights of teams and drivers from the ALMS and GRAND-AM:

ALMS team Rebellion Racing’s No. 12 Toyota/Lola dropped one spot from Wednesday, and will start the 24 Hours sixth overall (and LMP1). ALMS regulars Nick Heidfield and Neel Jani are joined by Nicolas Prost this weekend in the prototype. Rebellion’s No. 13 entry, co-driven by Andrea Belicchi, Mathias Beche and Cong Fu Cheng, qualified right behind, in seventh.

The No. 77 Dempsey Del Piero-Proton Porsche 911 GT3 with Patrick Long, Joe Foster and Patrick Dempsey driving, will start seventh in the LM GTE Am class.

The sole GRAND-AM team competing, 8Star Motorsports, has a Ferrari F458 Italia going off ninth in LM GTE Am. Owner/driver Enzo Potolicchio, Rui Aguas and Jason Bright are the drivers.

And Ryan Dalziel, a Le Mans champion last year in LMP2, will co-drive the No. 53 SRT Motorsports Viper which will grid 10th in LM GTE Pro.