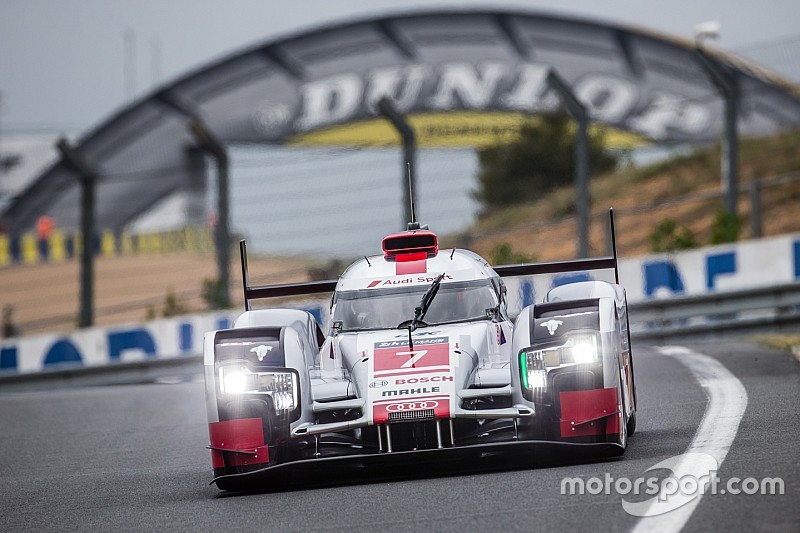 Allan McNish believes a lack of relevant tyre data from Sunday's Le Mans test day will make the battle between Audi, Porsche and Toyota even closer in the run-up to the 24-hour race.

Three-time Le Mans winner McNish, who retired as WEC champion at the end of 2013, continues to work with Audi as a special brand ambassador and spoke to Motorsport.com about his conclusions after a fascinating day of running at La Sarthe.

The Scot considers tyre performance to be one of the key ingredients for the LMP1 manufacturers to work on ahead of next weekend's race, after changeable weather on Sunday prevented any meaningful testing on different compounds.

“No one got a good understanding of tyre life yesterday in the dry,” McNish said. “It was difficult to read too much as everyone was out at different times in different conditions and they were changing lap to lap.

“Tyre wear isn’t the discussion point this year, it is the tyre performance that will be key. You have to be careful at certain points to not lose temperature.

"Managing the performance drop-off over a number of stints is crucial and nobody at this stage has real information at Le Mans, so there are some serious unknowns that I think will ultimately act as a good leveller in this area.”

McNish has been impressed with the way Audi has fought back from a tough end to the 2014 WEC season, and thinks that a large amount of work with Michelin over the winter has proven key.

“Last year [Audi] was not the best in keeping the rears performing well. That has been addressed now, and in both configurations of the new Audi R18 e-tron quattro it seems that we are better than Porsche in this regard. In reality this is what won Spa.

“The work with Michelin over the winter has paid dividends. A diesel powered LMP car is much different to a petrol engined car in terms of weight distribution and how much hybrid energy is working with the front tyres relative to the rears. So every area was looked at and some really good solutions found.”

McNish has also noted that the 2015-spec Audi has improved significantly in the first sector of Le Mans, which runs from the start line to just after Tertre Rouge. Audi were 1-2-3 on the timing screens throughout Sunday's sessions.

But, it is the extra pace in the all-important sector two, from exit of Tertre Rouge to Mulsanne Corner, where the most gains seem to have come in the last 12 months.

“Porsche have improved a lot in the last sector, but the Audi has improved in the second sector, where the work on aero efficiency has paid off quite a lot,” stated McNish.

Toyota not to be discounted

The 45-year old Scot is adamant that Toyota still remain a threat at La Sarthe and should not be underestimated despite a subdued start to 2015.

“Toyota’s pace should not be taken too matter-of-factly,” he said. “They were slower than they were last year, so I’m sure they have a lot more to show. They must have.

"I fully expect them to be much closer when they put in their super-capacitor for race week and they could be right there again. I don’t think they are panicking and I think they will be in the fight.”

McNish believes that the potential for Porsche to go an extra lap than Audi on fuel - 14 laps to Audi’s probable 13 - is potentially a decisive factor.

“The extra lap that Porsche were able to do in the WEC races so far and how this could play out at Le Mans might also be a crucial factor in getting a buffer at the end of the race. We’ll have to wait and see on that one.”