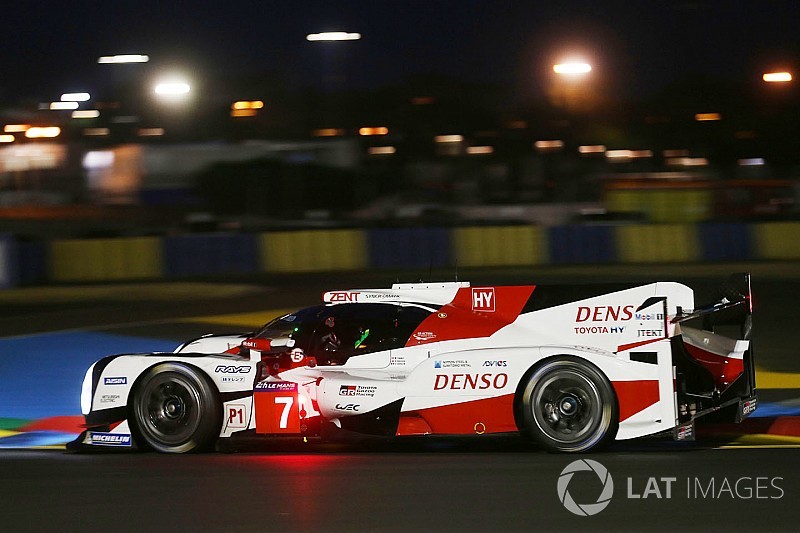 The session was 20 minutes late to start owing to barrier repairs at the Porsche Curves necessitated by a crash in the preceding Road to Le Mans practice session, cutting the session back from two hours to 1 hour and 40 minutes.

When the action finally commenced, Neel Jani’s free practice benchmark of 3m20.362s fell on the opening runs, as the #2 Porsche 919 Hybrid set a 3m19.710s in the hands of Timo Bernhard.

That stood as the session’s quickest time until Kobayashi logged a 3m18.793s some 15 minutes later, enjoying a near traffic-free run in the latter half of his lap.

Kobayashi’s time would not be beaten for the remaining 1 hour and 20 minutes of the session, the former Sauber and Caterham F1 driver securing provisional pole in the car he shares with Mike Conway and Stephane Sarrazin.

Bernhard’s early lap was good enough for third in the quicker of the two Porsche 919 Hybrids, 0.917s off the pace, ahead of Toyota’s third car, the #9 of Nicolas Lapierre.

A further 1.2s back was the second of the Porsches, the #1, with the car’s 3m21.165s best coming courtesy of Jani in the opening laps.

The sole LMP1 privateer, the #4 ByKolles ENSO CLM, was just over 10 seconds off the pace, with Dominik Kraihamer recording a 3m28.887s.

TDS on top in LMP2

The battle for top spot in the LMP2 class went down to the final 20 minutes, with the two Manor Orecas of Jean-Eric Vergne and Vitaly Petrov having sat first and second for a large proportion of the session.

Initially, Vergne had the advantage in the #24 entry, but once the crews had cycled through their drivers they were unleashed again.

Petrov was able to improve to a 3m30.502s in the #25 car, while Vergne could not go any quicker, to reverse the positions.

This left the two Manor cars third and fourth, ahead of the #38 Jackie Chan DC Racing Oreca of Thomas Laurent that had briefly held top spot in the early running.

The two Signatech Alpines were sixth and seventh, with Gustavo Menezes and Nelson Panciatici setting the times, ahead of the #13 Rebellion Oreca of Mathias Beche.

The #26 G-Drive Oreca, which set the pace in free practice, was ninth thanks to Roman Rusinov.

The best non-Oreca was the #29 Racing Team Nederland Dallara of Rubens Barrichello, who lapped 4.463s off the pace to take 13th.

That put him two places ahead of the best of the Ligiers, the # 32 United Autosports entry driven by Filipe Albuquerque.

The #34 Tockwith Ligier was 24th after briefly stopping on track in the hands of Karun Chandhok before crawling back to the pits. That put it ahead only of the #33 Eurasia Ligier.

The #27 SMP Dallara also hit trouble, catching fire near Mulsanne Corner and not being able to return to the pits.

That car ended up 16th thanks to the pace set by Mikhail Aleshin, who was at the wheel when it hit trouble.

Marco Sorensen lapped in 3m52.748s and then improved to 3m52.117s in the #95 Vantage he shares with Nicki Thiim and Richie Stanaway, and the time stood until the chequered flag.

Sam Bird, pacesetter in practice, fell short by just over a tenth of a second in the #71 AF Corse Ferrari with his attack in the opening minutes, and teammates Davide Rigon and Miguel Molina were unable to improve on his 3m52.235s.

But they were comfortably 0.888s of the sister entry piloted by James Calado, Alessandro Pier Guidi and Michele Rugolo.

The second works Aston of Serra/Adam/Turner was 0.173s off, but the fastest of the works Porsches - the #92 911 of Christensen/Estre/Werner - was nearly a second further adrift, and then suffered the indignity of being demoted in the closing minutes when Andy Priaulx wrangled a 3m54.118s lap out of the #67 Ford, which put that car fifth in class.

Chevrolet fared less well. Marcel Fassler’s 3m54.876s lap from the beginning of the session stood as the manufacturer’s fastest, and the #64 and #63 were ninth and 10th.

Aston Martin got the better of Porsche once again in GTE Am as Pedro Lamy set an early banker of 3m55.232s in the #98 Vantage, which teammate Mathias Lauda then improved upon with a 3m55.134s that stood as the class best until the end of the session.

Matteo Cairoli set the #77 Proton Porsche’s 3m55.692s in the opening minutes, which remained good enough for second place ahead of the #90 TF Sport Aston in which Euan Hankey set the fastest lap of 3m55.953s.