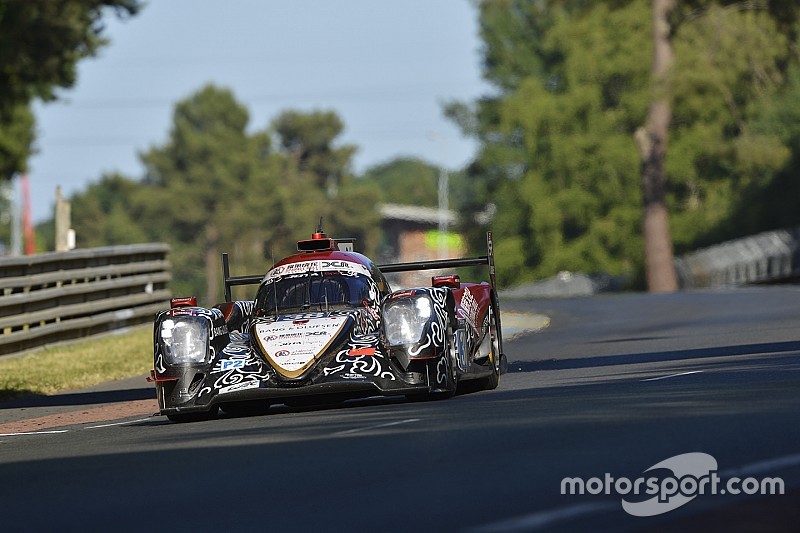 The Jackie Chan DC Racing LMP2 squad leads the 85th running of the Le Mans 24 Hours outright with two hours left to run, but is being chased hard by the #2 Porsche LMP1 in the fight for overall honours.

Following the demise of the #1 Porsche 919 Hybrid just after 11am local time, the #38 Jota-run DC Oreca 07 shared by Oliver Jarvis, Thomas Laurent and Ho-Pin Tung assumed a two-lap lead over the #2 Porsche 919 Hybrid of Brendon Hartley, Timo Bernhard and Earl Bamber.

With the Porsche lapping in the region of 10 seconds per lap faster, the gap was steadily whittled down over the course of the 21st and 22nd hours of the race, with Bernhard taking over from Hartley with a deficit of a lap behind Laurent in the #38.

DC Racing's chances of securing a historic overall win were dented when the team was forced to perform a rear bodywork change due to a faulty tail-light, costing it a little over a minute.

Bernhard put the #2 car back on the same lap with a pass on Laurent at Mulsanne corner towards the end of the 22nd hour, and was a little over three minutes in arrears at 1pm local time.

Third overall is the second-best of the LMP2 cars, the #35 Signatech Alpine of Pierre Ragues, Nelson Panciatici and Andre Negrao, which is two laps down on the lead.

The French squad gained the place from the #13 Rebellion Oreca, which lost time in the pits with a faulty starter motor. The Nelson Piquet Jr-driven car is just six seconds behind in fourth overall.

Completing the top six outright are the second DC Racing Oreca, the #37 machine, and the #32 United Autosports Ligier.

The surviving #8 Toyota TS050 Hybrid of Kazuki Nakajima, Sebastien Buemi and Anthony Davidson occupies ninth overall, 10 laps off the lead - and four laps behind the next car.

Five different marques continue to fill the top five places in the GTE Pro division, but the battle for class honours was being fought predominantly between the #97 Aston Martin and the #63 Corvette as the race entered its closing stages.

Daniel Serra passed Jan Magnussen for the lead of the class at the second chicane, but lost the place in the pits as his Danish rival handed over the #63 to Jordan Taylor.

Serra then regained the place, once again passing the Corvette at the second chicane, and has edged away to the tune of three seconds with two hours of the race to go.

The #91 Porsche 911 RSR runs third with Frederic Makowiecki at the wheel, followed by the #67 Ford GT of Harry Tincknell and the #71 Ferrari 488 GTE of Davide Rigon.

Ferrari continues to dominate the GTE Am ranks, with the #84 Ferrari of Will Stevens, Rob Smith and Dries Vanthoor on course for a comfortable victory over the #55 and #62 examples.