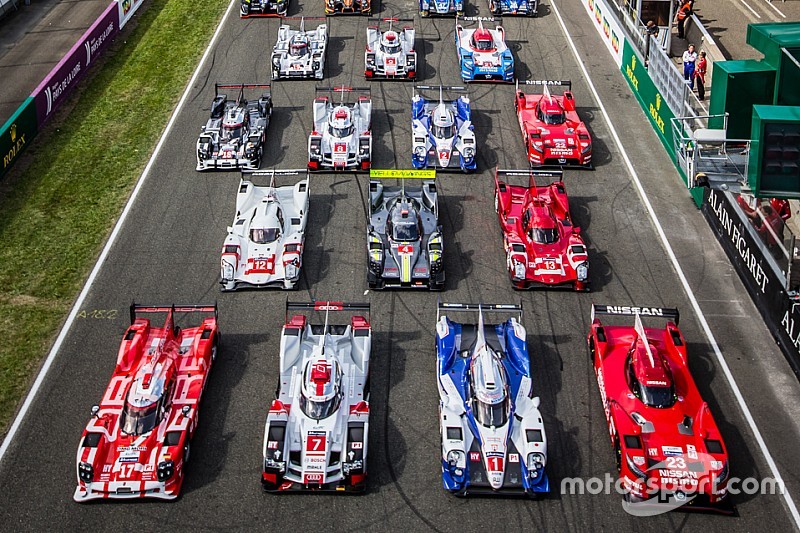 Today's official Le Mans test day will give the first indications on who holds the trump cards going in to the 83rd Le Mans 24 Hours in a fortnight's time, writes Sam Smith.

The three leading manufacturers in LMP1 go head to head with their respective ‘low-drag’ Le Mans kits for the very first time today.

Porsche are favourites for re-writing the pole position fastest time record, while Audi appear to have a slight advantage in race spec.

Truth be told though, the uniqueness of the Circuit de la Sarthe and the sheer nature of the event make accurate predictions utterly futile.

Porsche and Audi: The Big Two

Porsche and Audi are expected to fight out the Le Mans 24 Hours in its entirety in what promises to be an epic battle. The pair of endurance racing colossi appear to be extremely close on long distance pace albeit with distinct strengths in their respective technical packages.

The key weapon in the Porsche armoury is the fact that it can recuperate and deploy the full 8MJ from the 919s brakes and exhaust. The driver is key here as he has the delicate task of managing the gathered energy around the 8.47 mile lap of Le Mans.

The ‘boost’ that the Porsche 919 Hybrid will be getting on the Mulsanne straight and then again on the run from Arnage to Maison Blanche is likely to see times somewhere in the 3m15s-3m13s bracket if conditions allow in qualifying.

Some are even speculating on a 3m11s perfect lap time.

Porsche come to Le Mans as well prepared as they can possibly be. Exhaustive endurance tests at Abu Dhabi, Bahrain, Aragon and Paul Ricard have seen close to 35,000 test miles completed.

Audi Sport Team Joest, like Porsche, opted to run three cars at Spa earlier this month and like its close cousin in the VW Group, the reigning Le Mans champions from Ingolstadt have been conducting testing right up until the test day this weekend.

“We are in good shape and we feel that we are actually in much better position than last year,” Loic Duval told Motorsport.com last week after the latest test in Spain. “We obviously only run once a year at Le Mans, so the test day is actually quite vital.

“Not just from the testing and validating the aero data but also for the team and getting the feel for all the procedures. It is after all our home for almost a full month.”

Audi has done a stellar job in turning around its fortunes from the dark days of last autumn. Then they were most atypically on the back foot and trailing in Porsche and Toyotas wake, merely picking up crumbs from the top table.

The pain they felt was tangible at these events and they have striven to return stronger in the only way they know how – by applying their technical brilliance to ensure they regain the WEC and continuing an astonishing run of success at Le Mans which stretches back to the start of the present decade.

Audi has promoted itself to 4MJ with a developed version of the existing single kinetic energy-retrieval system on the front axle. The 4MJ deficit to Porsche remains unchanged, yet Audi insists it will sit closer in terms of hybrid boost. So far they have been proved largely correct on overall lap pace at Silverstone and Spa.

Probably the key features that have turned around Audi’s fortunes this year have been mechanical, with the adoption of an LSS (Linked Suspension System).

The LSS is similar to that which Porsche was believed to be using last season. Audi’s system has been developed aggressively over the last year and has proffered significant enhancement on kerb use and balance optimisation on the R18 e-tron quattro.

"It is a very big tool you can play with and we are still understanding it better," said Andre Lotterer last weekend. "We already made a big step with it and we have reduced some of the 'bouncing' but this is one of the main things that we are focusing on but so far it is a good tool to have."

Crucially, Audi has also improved the all-round aero package in 2015. This has seen last years struggle of getting tyres ‘lit-up’ quickly all but banished.

Toyota: Underdogs not to be ignored

As revealed by Motorsport.com earlier this month, Kazuki Nakajima will be fit to join reigning world champions Sebastien Buemi and Anthony Davidson in the No.1 Toyota TS 040 HYBRID for the test day and most likely the race too. The former Williams F1 driver just needs the final say-so from FIA medical delegate Dr Alain Chantegret at Le Mans.

Toyota is the self-acknowledged underdog going in to the race which they should have won 12 months ago. The reason they are in this position is simple – they haven’t made as significant a gain as their direct rivals at Audi and Porsche.

Still, the German-based and Japanese-entered manufacturer should not be discounted entirely. On pace they are expected to be a little closer than they showed at Spa, but it appears the only chance of victory or perhaps even a podium is a repeat of last year’s race and some ‘old school’ Le Mans attrition and some atrocious weather.

Toyota has made some decent gains in 2015. Aerodynamically the return to the ‘open-nose’ concept appears to be one of these, as does the designs vehicle dynamics and their effect on the Michelin tyres, which so far has proved a strong point for the TS 040 HYBRID.

It will get all the attention on Sunday and the Nissan GT-R LM NISMO rightly deserves its day in the sun. It has been an extraordinarily difficult birth and first tentative steps for the fearless project.

The innovative and technically fascinating GT-R LM NISMO is not expected to finish its first Le Mans nor feature among the top eight LMP1 cars at all. Designed exclusively for Le Mans, the car has suffered a myriad of problems in initial testing, the most critical of which is with the Flywheel ERS system.

From a handling point of view, the drivers have had to understand and adapt proficiently to the weight distribution and quirky handling characteristics of the front-engined, front-wheel-drive design. It hasn’t been easy. Neither has the reliability been good on the car, with a variety of issues severely limiting testing over the last three months.

These of course are issues that could occur on any new design, let alone one as radical as the Nissan GT-R LM NISMO. The feeling is though that completing anything beyond ten hours without significant problem would be a major achievement in Nissan’s first crack at the endurance classic since 1999.

The car should be a bullet on the straights as the 3-litre twin-turbo V6 is strong and according to Cox "a peach". The tyres should also be a boon for the Nissan package.

The smaller tyres at the rear – 20cm as opposed to 31cm at the front aids aero efficiency as it reduces the drag considerably. However there are clearly acknowledged unknowns as to tyre wear on the rubber.

Nissan has opted to run in the 2MJ sub-class which is the lowest in the LMP1 field. Cox has down-played expectations of the cars pace ahead of the Test Day this weekend, stating that they don’t have a qualifying tyre to attempt an out and out quick run.

This may be disappointing but Cox has shrewdly laid foundations for prospects this year to be checked and for the long-range plans for Nissan to more readily challenge the big three in 2016 and beyond.