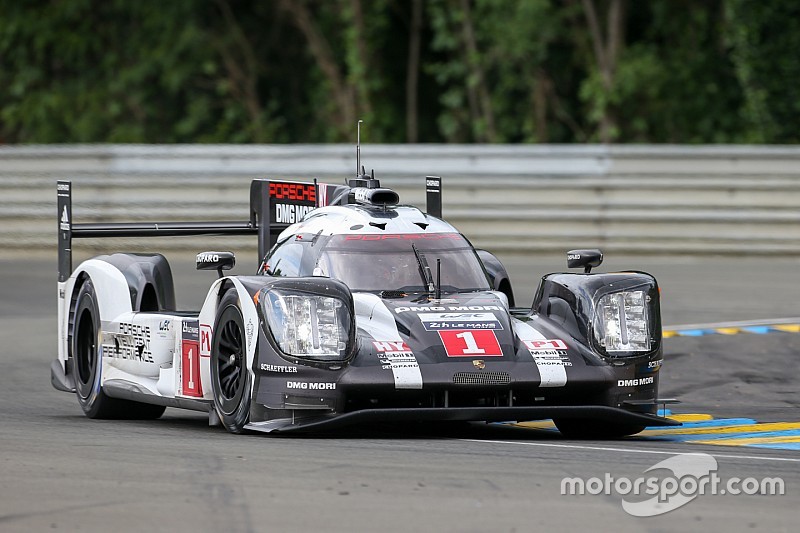 Each of the three LMP1 manufacturer teams led at various stages during a four-hour session that saw both dry and wet running thanks to scattered showers in the second and third hours.

Toyota’s Anthony Davidson set the initial pace, but soon Mark Webber was at the top of the screens on a 3m35.272s in the #1 Porsche.

Some time later, Loic Duval registered a 3m24.852s lap in the #8 Audi R18 to lead the way at the end of the firs hour, but then after the rain cleared a flurry of fastest laps eventually saw the Porsche 1-2 manifest itself.

Lucas di Grassi briefly outpaced the Porsches with a 3m22.985s lap in the #8 Audi, but the Brazilian then suffered a lurid moment at the first Mulsanne chicane and rattled the kerbs.

This caused the Audi to limp back to the pits, with di Grassi reporting some smoke and vibrations from the front of the R18.

The #8 did not emerge from the pits as repairs were carried out in readiness for qualifying.

The #7 Audi of Marcel Fassler, Andre Lotterer and Benoit Treluyer had a troublesome session, which included an early spin for Treluyer. The three-time winners ended the session in sixth position after struggling with a loose connector on a fuel flow meter.

Toyota eventually placed fourth and fifth, with the #6 car just under of a second ahead of the sister TS 050 Hybrid.

But late drama struck Stephane Sarrazin, as he toured back to the pits with significant front-end damage after an incident at Indianapolis that brought out the third and final red flag - which ended the session prematurely.

Two other red flags interrupted proceedings, the first occurring just before half-distance as Pierre Kaffer’s LMP1 privateer CLM P1/01-AER caught fire between the Mulsanne chicanes before being brought back to the paddock on a flatbed truck.

The second was caused by Bruno Senna in the #43 RGR Sport by Morand Ligier, the Brazilian ending up getting stuck in the gravel at Indianapolis.

In the LMP2 class, Tristan Gommendy’s time of 3m40.781s set early in the session put the #33 Eurasia Oreca atop the screens for the majority of the session.

This was soon usurped by one of the class favourites, the #36 Signatech Alpine A410-Nissan driven by reigning class champion Nicolas Lapierre, who peaked with a 3m39.721s.

But in the dying stages, it was the #47 KCMG car of Richard Bradley that stole the top spot on a 3m39.133s to go six tenths clear of his former teammate.

Third in the LMGTE Pro class was the best Ford GT - the #68 machine driven by Dirk Muller, Joey Hand and Sebastien Bourdais, which was just over a second adrift of the leading Ferrari.

There was trouble however for the #66 Ford in the closing stages as Billy Johnson spun and smote the wall at Mulsanne Corner before crawling back to the pits.

In the GTE Am class, the Clearwater Racing Ferrari 458 Italia driven by Rob Bell created a major surprise as it headed the class on a 3m57.543s, some 1.6 seconds ahead of the opposition.