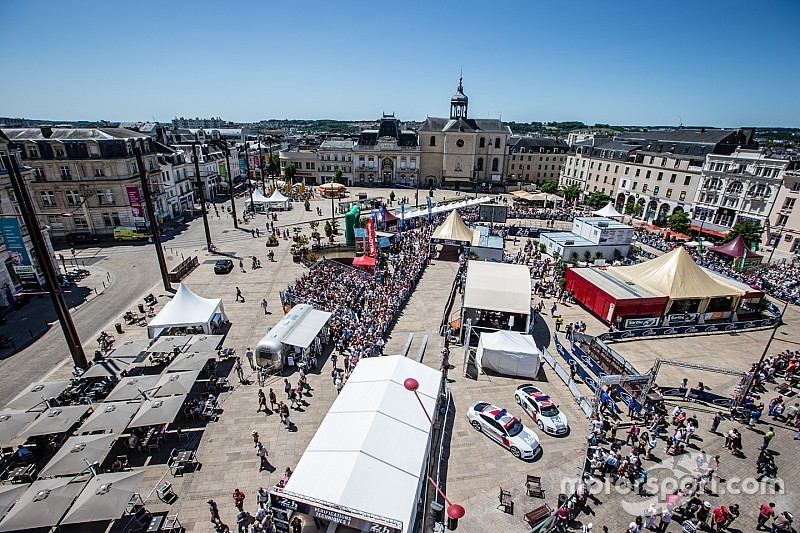 The crowds were out in their masses to cheer on 22 drivers, including the Audi and Nissan teams.

Today, the first scrutineering session marked the beginning of Le Mans week. Drivers and cars assembled at Place de la République, for the scrutineering procedures that will continue tomorrow. The crowds were out in their masses to cheer on 22 drivers, including the Audi and Nissan teams.

The loudest cheers were reserved for actor-driver Patrick Dempsey. As a regular driver in the 24 Hours, Dempsey takes the week’s festivities in his stride and like the other drivers and the fans, he will be looking forward to start of the race, at 3 pm on Saturday 13 June.

By 1.30 pm fans gathered along the roadside to watch the cars make their way to tents for the various administrative and technical checks. Although the session was not yet under way, three drivers dressed in black were already queuing up to take their turn. Johnny Kane, Danny Watts and Nick Leventis were impatient to kick off the countdown to the race and more than ready to get started with today’s procedures. They are pleased to see their n°42 Dome S103 back at Le Mans this year as the car didn’t run the race itself last year due to an accident in a practice sessions.

At 2pm, the mechanics pushed the car out for all to see. This year, the public can get a better view of the cars thanks to a big screen set up on the square.

The Dome was the first of the 56 cars in the line-up to be subjected to the scrupulous checks administered by the scrutineers. Meanwhile, the three British drivers had to undergo checks of their own, before talking to the journalists present and then being interviewed on the stage by the race commentators.

66 drivers are required to undergo checks

The square was buzzing with activity all afternoon as the 22 cars filed past. In total 66 drivers are required to undergo checks. However, a few were absent today due to other engagements. The following four drivers have until 6 pm tomorrow to pass the checks: Bonanomi – Audi n°9 ; Monteiro – Team Bykolles n°4 ; Seefried – Dempsey Proton Racing n°77 ; Bachler – Abu Dhabi Proton Racing n°88.

German Manufacturer Audi is the outfit to beat and the new impeccably presented Audi R18 e-tron quattros were one of the highlights of the afternoon. But some only had eyes for Patrick Dempsey. Always very popular, especially with the women in the crowd, Dempsey once again raised a huge cheer as he mounted the official podium.

The striking lines of the Nissan GT-R LM Nismos impressed the crowds, who gathered excitedly around the vans that transport the cars from the circuit. A few minutes earlier, another Nissan-powered car, the n°41 attracted its share of attention, thanks to the highly publicised Gaëtan Palletou, who has gone from video games to the 24 Hours of Le Mans in less than ten months. The Swiss drivers of Rebellion Racing and their AER-powered R-Ones and Team Sard Morand rounded off a fabulous afternoon.

Scrutineering continues tomorrow, Monday 8 June. The first of the 34 cars will be the Porsche 911 GT3 RSR n°67 from Team AAI, in the LM GTE Am class. The car has run in the Asian Le Mans Series but this is the first time we have seen it at Le Mans. The day will proceed like today with a mixed list of cars in the various classes.

Ferrari, Aston Martin, Corvette and Porsche all feature in the LM GTE Pro class and in LM GTE Am, the Viper is sure to be popular.

As for LM P1, the Porsche 919 Hybrid will be present from 1.30 pm and later on World Endurance Champions Toyota Racing will take the stage. The procedures will finish at 5 pm with Krohn Racing’s characteristic green Ligier JS P2 closing the field.

Porsche at 24H of Le Mans and WEC: Marathon for men and machines