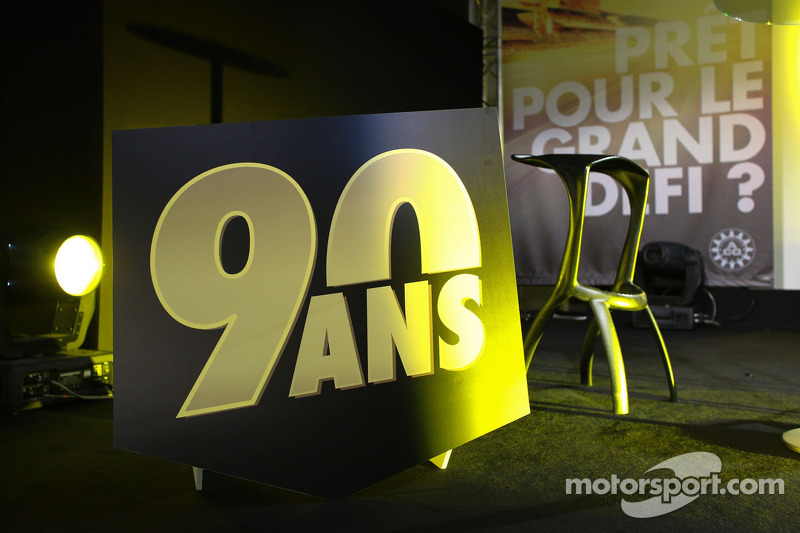 This year the Le Mans 24 Hours, the first running of which took place in 1923, celebrate their 90th anniversary! This is a red-letter event in the rich history of the greatest endurance race in the world.

Since the start of the year numerous special operations have taken place and they will continue to multiply until the start of the race on 22nd June. A round-up of the commemorations not to be missed.

Homage to the drivers - Friday 31st May


During a private evening – by invitation only – homage will be paid to the men who, by their talent and their courage, have written the history of the Le Mans 24 Hours.

During this special evening Tom Kristensen, Jacky Ickx, Derek Bell, Frank Biela, Emanuele Pirro, Yannick Dalmas and Henri Pescarolo, all of whom have won the event at least four times, will be inducted into the Le Mans 24-Hours Drivers Hall of Fame in the presence of the 90-years jury who elected the 11 cars of the legend, plus people from the world of art, show business and sport, in addition to teams, partners of the event and representatives of the media.

The only name missing among those of these exceptional drivers is the late Olivier Gendebien, 4-time winner of the race, who passed away in 1998.

By these new inductions into the Le Mans Drivers 90th Anniversary Hall of Fame the Automobile Club de l’Ouest will continue the actions it started during the first two rounds of the 2013 FIA World Endurance Championship.

At Silverstone on 13th April homage was paid to the British drivers having taken part in the Le Mans 24 Hours on at least three occasions through their doyen, 94-year-old Eric Thompson, who raced in the Sarthe seven times between 1949 and 1955.

On 3rd May the day before the Spa-Francorchamps 6 Hours, 86-year-old Freddy Rousselle, three outings between 1956 and 1958, also joined this elite club.

The OAK Racing team will unveil the official 90th anniversary Le Mans 24 -Hours Art Car to kick off the evening. The Louis Vuitton company will present the case to President Pierre Fillon made specially to protect the Le Mans 24-Hours Trophy from now on.


In partnership with the Sarthe General Council, a mini-presentation tour of the collection of Le Mans 24-Hours posters will take place in different towns in the department accompanied by the Chenard & Walcker victorious in 1923.

2nd June: Pontlieue market (Le Mans), 3rd June: La Ferté Bernard market, 6th June: Lude market, 7th June: Sablé-sur-Sarthe market. This tour of the Sarthe for the 90th anniversary will finish on 15-16 June with the exhibition of all the posters in l’Abbaye de l’Epau with other items of the Le Mans 24-Hours Heritage.


Every evening a striking visual show, de la Visitation, Place de la République in the centre of Le Mans. From 22h00 onwards a film will run in a loop retracing the greatest moments of the race since 1923. The town of Le Mans is behind this operation.

During scrutineering and admin. checks on the Place de la République, decorated in the colours of the 90th anniversary of the race, the town of Le Mans will put on an exhibition of the history of scrutineering linked to the different places where it has taken place since 1923.


In partnership with the town of Le Mans, the Pontlieue hairpin, which brought the race into the centre of the town, will be recreated exactly as it was with the advertising hoardings of the era, fencing, footbridge, etc, including the café that still exists redecorated in the 20s’ style!

Cars from the epoch will use a small circuit to round this famous corner! A ‘guinguette’ will also be recreated in the courtyard of the Mauboussin school adjacent to the corner with a ball, music, entertainment and period clothing.

The evening will be open to the public and this exceptional reconstitution will be on show throughout the 2013 Le Mans 24-Hours week.

Homage will be paid to the 11 cars that have written the history of the race, which were elected at the start of the year by the surfers and the special jury presided over by Pierre Fillon, President of the Automobile Club de l’Ouest.

An exhibition centre for these legendary cars, brought to Le Mans from all over the world for the occasion, will be open to the public in the Le Mans 24-Hours village from Wednesday 19th to

During the pitwalk (pit lane open to the public) on Friday 21st June they will be lined up on the track on the slope leading up to the Dunlop Footbridge that will be decorated in an eye-catching fashion. At the top of this symbolic climb the Trophy will be displayed in its new case made by Louis Vuitton.

Thus, the spectators can walk on this mythical circuit and admire the cars that have written the Le Mans Legend. On Saturday 22nd June at 12h35 the 11 cars will do a full lap of the Le Mans 24-Hours circuit: they will then set off again at 13h15 for a second parade to bring the Le Mans 24-Hours Trophy to the President of the ACO who will put it up for victory again.

The big 90th anniversary party of the Le Mans 24 Hours and the different commemoration operations and surprises being put on are all reasons not to miss this anniversary race. All the more so as other events and ceremonies will be added to this already well-filled programme.


Three major concerts will take place during the Le Mans 24-Hours week inside the circuit during practice and the race. They will all start at 20h00 on the stage beside the Dunlop footbridge. They are free for general enclosure ticket holders. A quick reminder of the programme concocted by the ACO


Sharon & Tracy (a Le Mans rock foursome) will warm up the crowd before Puggy. The foursome mix rock, new wave and noisy pop from all over the world.


Jack & Lumber (a trio from Levallois with a marked accent on folk music) will be followed by Asaf Avidan, an Israeli singer who is hitting the musical headlines at the moment.


Local group Big Wireman combining rockabilly and garage/punk is the first act before Dallas Frasca, the mini Australian Janis Joplin, takes to the stage. Then comes the musical explosion of the week Earth Wind and Fire Experience featuring Al McKay.