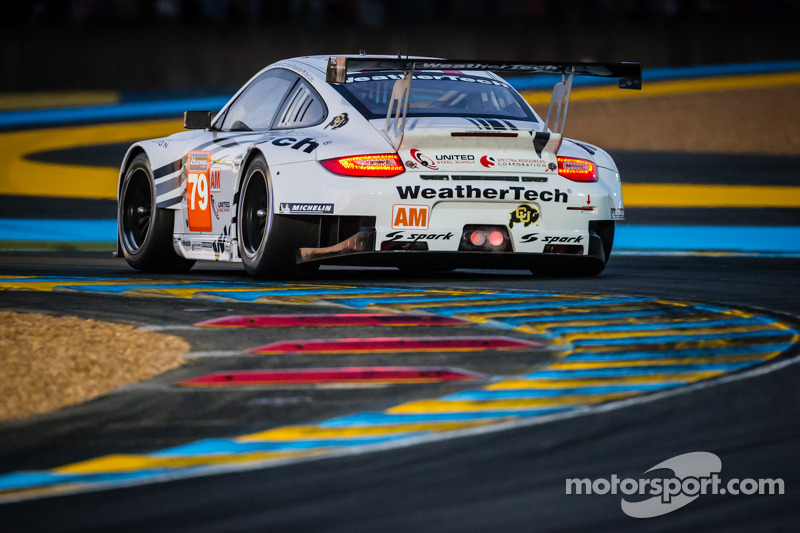 The 24 Hours of Le Mans is a grueling test under the best of circumstances, with every team expecting a three-driver lineup to share the load over 24 hours of hard racing.

For IMSA TUDOR United SportsCar Championship regulars Cooper MacNeil and Jeroen Bleekemolen, the task got a bit tougher on Saturday morning. Their teammate, Bret Curtis, crashed the No. 79 Porsche on Thursday evening, leaving it too badly damaged to be repaired for the race.

Yesterday, the team was able to secure another car with strong ties to the United States, as it was the same Porsche raced in last year’s American Le Mans Series by current TUDOR United SportsCar Championship team, Paul Miller Racing.

With the replacement car in hand, the team has planned to utilize its current regular driver, Sebastien Crubile, to complete the driver lineup. However, ACO officials would not allow Crubile to race, as he did not fulfill the required minimum amount of laps in night practice. With no other replacement drivers available, the team elected to go forward with only a two-driver lineup consisting of 2013 ALMS GTC champions, Bleekemolen and MacNeil.

The move also forced the team to move up from the GTE Am class – which requires three-driver lineups – to the GTE Pro class, which is dominated by factory-supported teams but does allow lineups of only two drivers.

“Because we’re moving to the Pro category, we could have added one of the drivers that dropped out of the No. 99 Aston [Martin], but Jeroen and I decided that we wanted to do it by ourselves, because it makes a good story,” MacNeil said. “I think we’re up to the challenge. Hopefully, we don’t have any issues and just stay steady and keep running.”

The team did have early challenges in the race, with Bleekemolen suffering from a cut left-rear tire that forced him to limp the car around the 8.469-mile circuit for an unscheduled pit stop. It was just another hurdle in a week with many twists and turns.

“It’s been crazy,” Bleekemolen said. “We haven’t really known what was going to happen. We had no clue if we were going to be able to run at all, if we got a third driver or not, which class we would be in, and we only found out, like, five minutes before warm up. It was a bit of a crazy thing. I’ve never experienced that before.”