The GT1 category doesn't appear to be dead after all. French GT specialists Larbre Competition is the latest team to commit to running in the premier Grand Touring category, revealing plans to enter a Saleen S7-R in the European-based Le Mans Series ...

The GT1 category doesn't appear to be dead after all. French GT specialists Larbre Competition is the latest team to commit to running in the premier Grand Touring category, revealing plans to enter a Saleen S7-R in the European-based Le Mans Series for 2009. 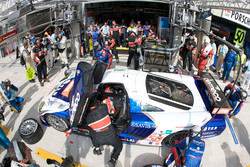 "The team is delighted to be returning to the Le Mans Series," Leconte said. "We are long-term supporters of the LMS and have enjoyed great success with them over the past few years. As well as defending our French GT crown and racing at the Le Mans 24 Hours we will have a very exciting sporting programme in 2009."

Larbre has been a name closely associated with the Le Mans Series since the championship's inception, having won the inaugural GTS drivers' and teams' championships in 2004 with a Ferrari 550 Maranello, and also taking top honors in 2006 with an Aston Martin DBR9.

Last season, Larbre competed in the opening round of the championship at Barcelona before pulling out and concentrating on its programs in the FIA GT and French FFSA GT championships. This year, the team plans to once again pull double duty, but with programs in the Le Mans Series and FFSA GT Championship.

Team veterans Patrick Bornhauser, David Halladay and Patrice Goueslard are expected to pilot the Saleen in the opening Le Mans Series round at Barcelona on April 5, with further driver-related announcements for the season to follow.

The finalization of the team's plans hinges on confirmation of its invitation to the 24 Hours of Le Mans in June, an event the French squad has contested for the past 17 consecutive years. The Automobile Cub de l'Ouest is expected to release the entry list for the twice-around-the-clock road-racing classic on February 26.

Many of these new pairings will be out in full force next month at the Paul Ricard High Speed Test Track in the south of France, for the series' official test days on March 8 and 9.