Larbre Competition are confident of forward progress in this year’s Le Mans 24 Hours after their pair of Corvette C6.R GTE Am entries secured sixth and 12th in class during Thursday’s final qualifying. 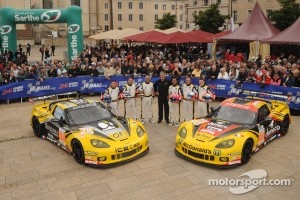 The Val de Vienne-based outfit have every reason to be upbeat about their prospects having taken GTE Am victory in last year’s 24 Hours from eighth on the grid. They will look to repeat that achievement today as the world famous endurance race celebrates its 80th running at the Circuit de la Sarthe.

Larbre’s #50 machine of Patrick Bornhauser, Pedro Lamy and Julien Canal will start the race from sixth spot after showing competitive pace throughout the two days of qualifying running. Set-up issues ultimately prevented the defending victors from challenging for the front row but they remain confident that the C6.R will perform consistently over the event’s duration.

Meanwhile the #70 of Jean Philippe Belloc, Pascal Gibon and Christophe Bourret – who sealed a Larbre one-two in last year’s race – will begin the twice-around-the-clock contest from 12th after a puncture hampered their progress in qualifying.

This year’s Le Mans 24 Hours gets underway at 3pm local time at the iconic French venue. Larbre Competition will take the start confident of moving up from their grid slots and hopeful of replicating the success they achieved at the race in 2010 and 2011.

Patrick Bornhauser, #50 Corvette C6.R: “During Wednesday’s first session I was quickly able to get comfortable in the car and record good times from the off. The setup was exactly what we’d asked from our engineer with the brakes in particular giving me a great deal of confidence. In the second run however something seemed to change. Despite the track becoming more rubbered in lap-by-lap I just couldn’t find the grip, with oversteer proving a particular problem. On Thursday we took a new set-up direction and this seemed to solve some of the issues, though the rear is still not as stable as we would like. We will work to remedy this and look to move up the order in the race.”

Pedro Lamy, #50 Corvette C6.R: “The car went well on Wednesday and I believe the work we have put in is paying off. I requested a slight adjustment to the balance through the rear wing, although this proved less efficient so we went back to the original settings. Like my team-mates, I suffered with a loose rear during Thursday’s sessions. The race is extremely long so we must work to improve the handling.”

Julien Canal, #50 Corvette C6.R: “I’m glad that all three of us had the same feeling with the car throughout practice, and that we were able to run at a similar pace as this avoids wasting time juggling setups. I noticed some problems with the car during the later sessions so we will discuss these at the next briefing and assess what can be done to make improvements.”

Jean Philippe Belloc, #70 Corvette C6.R: “The team did its utmost to prepare for the race but we still have some loose ends to tie up if we are to be 100% ready. We suffered a few punctures that could have led to more serious consequences but our crew is working well together and we remain focused on our goal: to avoid mistakes and make the finish.”

Pascal Gibon, #70 Corvette C6.R: “Practice and qualifying proved a little tricky, not least with the punctures and some problems with set-up direction. We will take the start of tomorrow’s race hoping for better things to come.”

Christophe Bourret, #70 Corvette C6.R: “We had some issues with tyre wear and handling today. It’s not ideal preparation ahead of the 24 Hours but at least we know what we need to put right. We’ll be hoping to progress in the race.”

With no track action on Friday the Larbre pilots soaked up the Le Mans atmosphere at the traditional drivers parade. Despite heavy rain showers the fans turned out in force and proved as passionate as ever ahead of today’s 80th running of the iconic endurance race. Following a clean run in this morning’s warm-up the team will take the start at 3pm local time.

Polesitting Audi holds the lead after the first hour