Women have had a spotted history in Motorsports, but Audi's lead engineer is paving the way for wins on racing's biggest stage.

Danica Patrick, Sarah Fisher, Erin Crocker and the Force girls…there have been plenty of women participate and win in racing.

No one will forget Patrick’s tearful win in Japan. It was a well calculated fuel mileage race that is equally credited to the race engineer, strategist, crew chief…whatever they are called in IndyCar…

As of only a couple weeks ago, there have officially been 100 NHRA wins by women. That’s huge! An incredible statistic that this race fan can only hope grows.

But what about the 24 Hours of Le Mans? It is the biggest race in the world, showcasing the most technologically advanced machines with some of the best drivers in the world taking part in the twice around the clock challenge…

Has a women ever won that? Well, no. 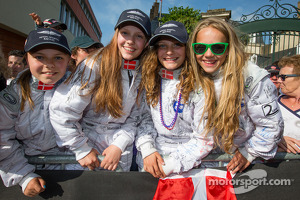 The closest a woman has come to winning overall was in 1932 when French driver Odette Siko finished fourth overall, also taking home the 2-litre class win.

Teaming up with a countryman by the name of Jean Sabipa, she entered her own Alfa Romeo 6C 1750. The average speed for the winner in 1932 was a little over 123 km/h.

But then it hit me. It takes a team to win Le Mans. I know there have been multiple women involved in race wins. Likely a car designer, or a PR girl. This is a team sport.

Leena Gade is the head race engineer behind one of the three Audi LMP1 cars that take on Le Mans each year. She is not the lead engineer of a Pro/Am Ferrari program, or even an aerodynamicist behind the scenes. She is lead engineer, the boss of Audi’s #1 car. Not the #2, or even the one-off #3… 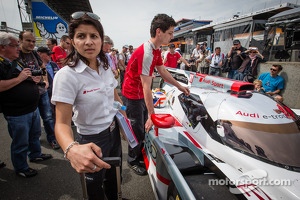 She is bad ass.

In her younger years, alongside her sister Teena, they fell in love with auto racing during the early nineties.

“We got into it properly through 1990 and 1991. We watched Senna win, watched Mansell do his thing in '92. It was basically Murray Walker and James Hunt's commentary that got us hooked. Anyone watching F1 at that time would have been taken in by them," she told the Observer in 2012.

"It was obsessive, probably a bit like a religion, we never missed a single race."

Gade went from an all girls school to engineering school, then the tough part of her career came along. Rejection.

She spent some time in Formula BMW, A1GP and GT Racing…before Audi called in 2007.

In her inaugural season with Audi, under head engineer Howden Haynes, she helped bring Allan McNish to an ALMS title. The successful season validated Gade’s love of the sport and drive to be involved in endurance racing.

Then came the biggest race of her career so far…Le Mans 2011. 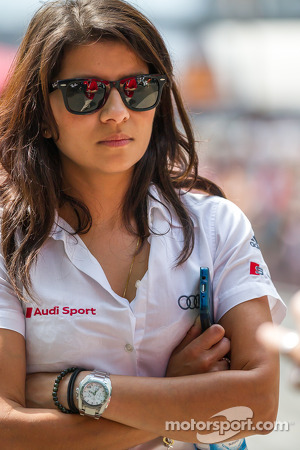 She entered that race as the head engineer of the #2 car. It almost doesn’t matter which Audi drivers she had, as the team only straps the best into their cars. Marcel Fassler, Andre Lotterer and Benoit Treluyer wheeled her Audi R18 TDI during the 79th running of the event.

After finding herself with the entirety of the Audi Sport Team Joest effort looking at her as the only engineer with a car left in the race, Gade minimized the mistakes, made the right calls on pit lane, and importantly had fast drivers wheeling the car.

She was the boss for that day and proved her talent, her cool-under-pressure demeanor and solidified her career in one of the best teams on the grid at Le Mans.

She attributes much of the success to the team around her, but understands the role she plays. It took four-weeks of extreme preparation to bring together the winning effort at Le Mans.

“With my number one mechanic Ronny, we discussed radio protocol, we practiced more parts changes than the other two crews and we checked and rechecked our work, even when it meant finishing later than the other cars. Possibly the biggest step, though, was trusting each other. Four weeks of long days, a lot of soul searching and totally readdressing our organization brought us to Le Mans race week,” she told FemaleRacingNews.com.

“My recollection (of the win) is of pure relief that I made it through with the odd mistake but having believed it was possible. I turned around a team that a few months before looked incapable of making it through the first part of the weekend, let alone the race itself,” she said.

I forgot to mention, she came back the very next year and won it again.

This year, she will be that calm and calculated voice over the radio for Lucas Di Grassi, Marc Gene and Tom Kristensen, a team that has a huge challenge ahead of them after suffering two serious wrecks in two days leading up to qualifying for this year’s race.

“If this job was easy, everyone would do it, but it isn’t. Not many guys want it and even fewer girls do, but I hope that when I lead my team at any race, I show both that anyone, if they put their mind to it, can achieve so much in motor sport. It’s hard but worth every bit of the sweat and tears.”