WATCH OUT FOR THE BELGIANS!

Thursday night, the #22 shone brightly on the sidepods of the beautiful Aston Martin LMP1, entered by Kronos Racing in collaboration with the Marc VDS Racing Team. Maxime Martin, best rookie driver in qualifying, showed his talent by lapping in 3'36.551, setting the 12th time overall, a magnificent effort in his first participation in the Le Mans 24 hours. 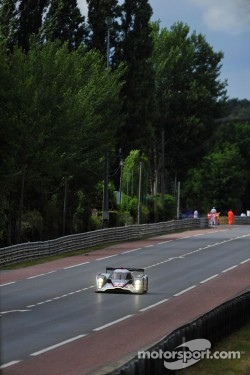 "With the second set of soft Michelin tyres we could probably have found a couple more seconds, which would have put us in the top 10," believes the young Belgian driver, stopped in his effort by a red flag. "The car lacks some precision when changing direction, we are suffering from understeer a bit, but the well-balanced behaviour makes the car comfortable to drive, even though we have some vibrations under braking. It was not our aim to get a quick time at whatever the cost. We had to prepare the race as well, especially since we had lost some valuable track time."

Let's remind ourselves that even though the team only got the green light a couple of weeks ago, the project was quickly well underway, thanks to the combined efforts of two Belgian teams, Kronos Racing and the Marc VDS Racing Team. Some fifteen laps during the test day in April and a symbolical shakedown at Lurcy Lewis was all the action the car got before coming to Le Mans. The Lola B09/60-chassis was completely revised by Aston Martin, and for the race a new V12-engine and gearbox will be put in the car.

"The engine we used during qualifying was at the end of its life-span", team director Marc Van Dalen confirms. "That is why we turned it down a bit. Considering the material at his disposal, Maxime's efforts were more than excellent. He lives up to all the expectations. Don't forget this is only his first Le Mans, his first time at the wheel of an LMP1 even. It was of little use to chase a sharper qualifying time, because the hardest is yet to come. That is why we mainly focused on preparing the race."

A task well executed by Vanina Ickx and Bas Leinders, who determined a set-up with which the Aston Martin can lap at a realistic pace during the race. The drivers covered as many laps as possible, by day and during the night, and now the team will start the final preparations for the race, while the technical staff will determine a suitable strategy.

"The whole team followed the schedule for the qualifying session perfectly", team manager Jean-Michel Delporte adds. "Despite a relative lack of experience, even though we receive the support of Aston Martin Racing, we can be happy with our performance. The adventure now continues, during 24 hours, and we are well aware that there will be many pitfalls to avoid. We want to achieve such by choosing for rather a safe pace, trying to gain positions by being reliable. Let's hope those tactics work until the end..."

Keep an eye on the #22 Aston Martin during these 24 hours. The Belgians might surprise you!