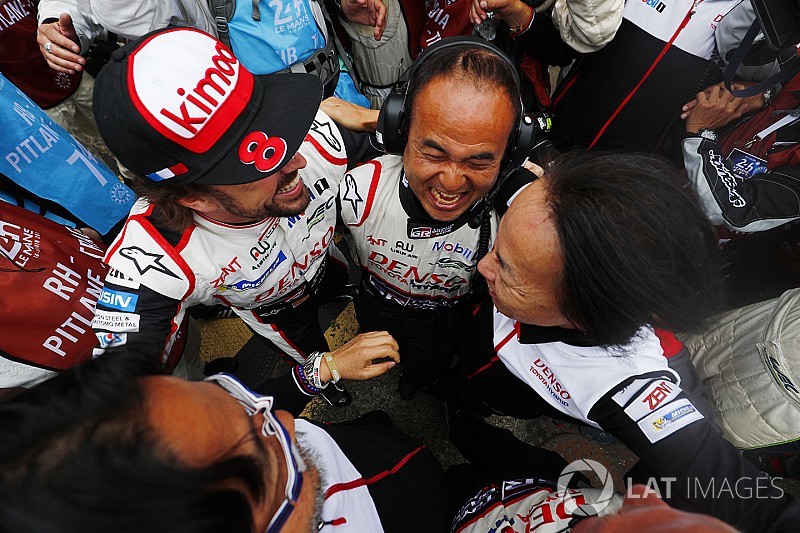 Le Mans legend Tom Kristensen believes that Fernando Alonso will go on to become World Endurance champion and return to the Indianapolis 500, now that he has “conquered” the 24-hour French sportscar classic.

Alonso achieved the second leg of the ‘Triple Crown’ of Monaco Grand Prix, Le Mans 24 Hours and Indy 500 on Sunday, and – speaking on his Eurosport TV show – Kristensen hailed the manner in which he won Le Mans with Toyota at his first attempt.

“Alonso has come and conquered Le Mans, along with his teammates, and not put one foot wrong as we’ve seen all through the race,” said Kristensen, who won Le Mans a record nine times.

“To me, I think he also sees the chance to be world [endurance] champion, which means he will continue to drive until Le Mans next year – and I think he will do that.

“I would not predict that he stops in F1, but I will predict he’ll definitely be back at the Indy 500. Maybe he’ll do a full season.”

After the race, Alonso said: “Yeah, yeah, it’s true the Triple Crown is on, we have two, let’s see if we can achieve the Indy 500 soon.”

Toyota “relieved” as well as proud

Kristensen also paid tribute to Toyota as it claimed its first-ever Le Mans success after years of heartbreak previously.

“It’s immense, they’re very proud but they’re also very relieved,” he said. “Coming close a lot of times, remember two years ago, when Kazuki Nakajima stopped with just one lap to go. For him to finish, and then take those steps up to the top step of the podium, that’s been a long journey – and a fantastic feeling.

“Only the second Japanese manufacturer to win after Mazda in 1991, which always hurt Toyota a bit as well. They crushed all the competition, they hadn’t really got any in that sense, but they did so at a very high level. The cars were evenly matched, it was a strong fight.”