The first Chinese outfit team to compete in the Le Mans 24 Hours was forced to retire with a leaking fuel cell after 19 hours and 241 laps of the world-famous French endurance classic.

After setting a milestone in motorsport history by becoming the first Chinese outfit to compete in the Le Mans 24 Hours, KC Motorgroup Ltd. (KCMG) continued to impress by delivering a promising performance during their maiden appearance at the Circuit de la Sarthe this weekend. 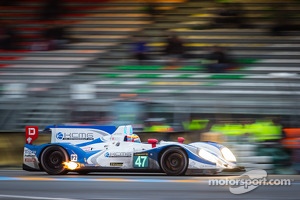 Ultimately however the team’s blue and white #47 Morgan-Nissan LMP2 was forced to retire with a leaking fuel cell after 19 hours and 241 laps of the world-famous French endurance classic.

The team, represented by drivers Alexandre Imperatori, Ho-Pin Tung and Matthew Howson, qualified a superb sixth in class before making an assured start to the 24 Hours on Saturday despite the tricky, changeable weather conditions and multiple safety car periods.

Unfortunately the first of these cautions was for an incident involving Danish GTE Am driver Allan Simonsen, who sadly succumbed to his injuries soon after. The team wishes to extend its sincere condolences to Allan’s family and Aston Martin Racing for whom he competed.

The opening two hours saw Imperatori steadily climb the LMP2 leaderboard and even headed the class for several laps before a brake balance problem dropped the car several places down the field. He was eventually replaced by Tung, who displayed his ability in the drying conditions by regaining the team’s previous position inside the top six.

Despite the track being extremely slippery, Howson too was able to demonstrate his talent by utilising a fantastic tyre strategy as well as fuel management during his opening stint.

KCMG remained in the hunt as the race passed its half distance mark with first Imperatori and then Tung turning lap times representative of the more experienced frontrunners’ pace. Howson too had been fast before a spin in the tricky conditions and a subsequent vibration stymied his progress.

Although the team was able to fix the issue once the car had been handed over to Imperatori, they were left with no choice but to retire just before lunchtime on Sunday as a result of the fuel leak that later developed.

Alexandre Imperatori, KCMG driver: “It was such a shame that we weren’t able to finish the race and I feel especially bad for the crew back in the garage as the entire team put a massive amount of effort into this event. The team was able to fix everything and got us back out there in the game before we had no choice but to retire due to the broken fuel cell.

It just wasn’t safe to continue once it began to leak. But again, the entire team along with Ho-Pin, Matt and myself made a tremendous effort. It was a really good race and an exceptional experience. I want to say thank you to Paul Ip for putting this together.

We have done China very proud today as we lead the race at one point and our goal now is to come back next year and win. I also want to express my deepest condolences to the family of Allan Simonsen who died yesterday. It was unfortunate and shocking news, especially as we raced with him last year in Ordos. It was a sad day for motorsport and I want to extend my heartfelt condolences to all of his loved ones.”

Ho-Pin Tung, KCMG driver: “Obviously it was disappointing that we didn’t manage to finish the race but overall I think we can be very proud as a team. It’s been quite a feat to put this programme together two months before its Le Mans debut, and to be competitive is a great achievement for all of us. I think if there had not been issues with the car we definitely would have been at the front.

This is a factor of endurance racing and to have some minor technical issues that the team could do nothing about is just bad luck. Of course I am disappointed but also very proud to be here in Le Mans and it has been a great honour to be part of KCMG’s adventure.

Also, I extend my sincere condolences to all the family, relatives and friends of Allan Simonsen. I’ve known Allan since 2001 and we’ve always kept in touch. I feel truly saddened as we spent some time together last year. It’s extremely shocking and his death has certainly overshadowed the weekend.”

Matthew Howson, KCMG driver: “Overall I think it’s been a great debut for the entire team. We were extremely competitive from the start at the Test Day last week right through until the race itself. The whole team really hasn’t put a foot wrong and have exerted a tremendous effort throughout the entire week.

Alex, Ho-Pin and I only made one or two mistakes and if we had not encountered any technical issues with the car could have perhaps fought for the final step on the podium. It’s been a great honour to be part of the first Chinese team ever to compete at Le Mans, and being in podium contention amongst such a strong LMP2 field is a massive tribute to everybody involved.”

Paul Ip, KCMG Team Owner: “We were all hoping to finish the race and with the progress that we’ve shown throughout the weekend had been in the running for a top position too. The entire team and I were expecting a different result but, nonetheless, we had a good race despite the technical issue encountered that forced us to retire early.

I am proud of what we have accomplished here in Le Mans and I want to commend Alex, Ho-Pin, Matt and the entire team for doing an amazing job. It was an honour to represent China here in Le Mans and I am looking forward to returning next year. Thank you to everyone who supported us in our journey to the Le Mans 24 Hours! It has been a great adventure for all of us.”