Jonny Kane will contest his 10th 24 Hours of Le Mans. The Strakka Racing driver will be racing for the gold in a HPD ARX-03c Honda on the La Sarth circuit plus in the World Endurance Championship season long challenge.

Strakka Racing’s Jonny Kane will reach a personal milestone this summer, when he contests the Le Mans 24 Hour race for a tenth time.

The legendary race takes place on 22-23 June and forms part of the 2013 FIA World Endurance Championship, which the Silverstone-based team is contesting in a Honda Performance Development ARX-03c.

In nine previous attempts at the Le Mans 24 Hours, the 39-year old professional racing driver, originally from Comber in Northern Ireland and who now resides in Thame, Oxfordshire, has only finished the race three times – twice with Strakka Racing in the last three years.

It would be nice to celebrate my tenth Le Mans with another top three finish.

In his first season with Strakka Racing, Jonny scored his best Le Mans result to date in 2010, when he came home 1st in LMP2, and a record-breaking 5th overall, in a HPD ARX-01c.

Having failed the finish in 2011, Strakka Racing returned to Le Mans with a new LMP1 car in 2012 – qualifying the HPD ARX-03a as top LMP1 Privateer car. An oil leak in the transmission system prevented Jonny from starting 7th on the grid, and after repairs where carried out in the pits, he eventually joined the race 22 minutes later, six laps down and in 56th and last place.

Together with team-mates Nick Leventis and Danny Watts, Jonny helped Strakka Racing fight back to a magnificent 3rd in the FIA World Endurance Championship for Privateers’ category.

In addition to racing in the WEC, Jonny plays an important role in the Strakka Performance driver development programme, where his coaching skills and experience of simulator work are of enormous benefit to those wishing to become a more complete and better racing driver. 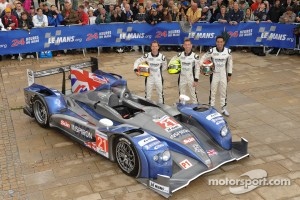 Jonny Kane: “Not everyone gets to race at the Le Mans 24 Hours ten times, so I’m really looking forward to reaching that milestone. I really enjoy the race, but I’ve only ever reached the finish three times in my nine previous attempts – although I’m pleased to say two of them have ended on the LMP2 podium. It would be nice to celebrate my tenth Le Mans with another top three finish. Last year’s pace showed that we can challenge for top LMP1 Privateer team honours at Le Mans, so that’s what we’ll be aiming for again this year.

“We have a strong driver line-up and Nick, Danny and I know each other very well. This will be our fourth season together, and whilst drivers in factory teams stay together for a long time, like Allan McNish, Tom Kristensen and Dindo Capello did at Audi, it’s more unusual to have such driver stability in a private team. Knowing each other so well certainly helps in endurance racing, because it’s a long and stressful race weekend and you get to know what to say to each other and when to avoid each other! We all get on extremely well at Strakka Racing – not just the drivers, but absolutely everyone in the team.

“With the upgrades to our HPD ARX-03c for 2013, and the experience we gained racing at new circuits last year, we will be very strong in the FIA World Endurance Championship. The aim is to win the Privateers’ title, and we’ll be looking for a strong start at our home event at Silverstone in April to get our season off to a flying start.”