JOTA Sport competes in the toughest and most famous sportscar race in the world, the Le Mans 24 Hours, next weekend (14-15 June) with the British team aiming for a class win in the prestigious annual race.

This year’s race marks JOTA’s eighth appearance at Le Mans, having competed under various monikers, the undisputed “jewel” in the sportscar calendar, with the small but dedicated Kent-based outfit justifiably gunning for victory – or at least its first-ever top-three class finish in the 17-car LM P2 field.

JOTA Group partner, Dolan, is racing at Le Mans for the fourth time. Having sampled motorsport first-hand when his wife bought him a private coaching day in 2007, Simon then set himself a target of racing at Le Mans. The 2010 British Chamber of Business' “Entrepreneur of the Year” has quickly established himself as a proficient and highly-respected “sportsman” race driver. 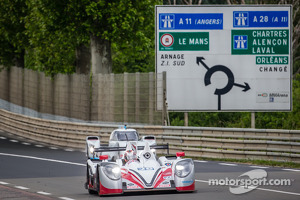 Tincknell embarked on his maiden sportscar season in 2014 after multiple wins in the FIA European and British Formula Three Championships since 2011 following a successful start to his motor racing career in karting throughout Europe.

Harry, who has never been to the Le Mans 24 Hours even as a spectator, made an immediate impact on the sportscar scene by topping the timesheets in the opening European Le Mans Series race at Silverstone in practice and qualifying. Tincknell then set the third fastest LM P2 time in practice and qualifying on his FIA World Endurance Championship debut in the Spa 6 Hour race (3 May).

Gené, who won Le Mans outright in 2009, has been loaned to JOTA from Audi Sport – a team with which he placed third overall last year – one of five top-six finishes the current Scuderia Ferrari F1 test driver achieved since his 36-race Formula One career.

Marc joined JOTA Sport for Spa in which he drove alongside Dolan and Tincknell achieving a brilliant runner-up placing in the LM P2 class.

The demanding 8.47-mile Le Mans circuit consisting of closed “public” roads combined with a permanent race track section will see the Dunlop-shod Zytek reach speeds of up to 190mph.

JOTA Sport recorded an unrepresentative seventh fastest time (3m 39.849s, Gené) in the LM P2 category in last Sunday’s (1 June) eight hour “official” test session at Le Mans – the only opportunity the invited entry gets to drive on the track before race week itself.

Split into two, four-hour sessions, the JOTA Zytek was consistently fast with allthree drivers behind the wheel which bodes well for the race. A left rear puncture, caused by debris, lost the team some afternoon running at the test.

“I’m aiming for a podium at the very least. I think we have the car, the team and the overall pace to make a really great challenge. A win is possible with just a little luck. We’ve had some pretty awful luck at Le Mans over the past three years, so maybe we are due some.

“I first went to Le Mans, as a spectator, in 2008. I was so blown away by the whole thing that I set a plan in action there and then to get me on thegrid within a few years, and of course in 2011 that goal became a reality.

“The atmosphere is incredible – with over a quarter of a million people watching you do your thing is pretty potent. As a race, it is the sheer challenge - for the individual, the team, the car - everything and everyone has to work perfectly for 24 hours which is what makes it so hard to win, and therefore so addictive.

“Thedriver’s parade through the town centre the day before the race is pretty special, but for me, the actual start of the race is the most satisfying. Nothing compares to that build up, being on the grid, the warm-up lap, the anticipation, and then the cars being released into the unknown.

“The worst scenario is when something happens outside of your control which you know there and then means the chance of a decent result is over. The whole year builds up to this one race with so many people working very hard, that’s when it’s pretty tough to take.

“Whilst the Le Mans circuit is long, it isn’t physically too punishing. You spend about 70% of the time on full throttle, so there is a time to ‘rest’. That said, it is pretty hard to get woken up at 2am, for example, to do a three hour stint behind the wheel in the cold and pitch dark!”

“My aim is a podium and we’ll give it everything for sure – we have a realistic chance of scoring a LM P2 class victory. Simon [Dolan] was very fast there last year while Marc [Gené] is a former winner and needs no introduction.

“I’ve raced previously in France but hadn’t set foot in Le Mans until the official test this weekend [30 May-1 June]. I’ve always been interested in Le Mans, especially from when Bentley won [2003] and obviously that interest intensified since I started working with Allan McNish in 2009, himself a three-time Le Mans winner.

“Le Mans is legendary. A fantastic circuit that provides great racing, a party atmosphere amongst the fans, and the fact that it’s the biggest motor race in the world. I drove on the track for the very first time last Sunday, completing my mandatory 10-laps during the morning session and ended up second fastest, so I was very happy with that. Unfortunately I didn’t get many laps in during the afternoon session after Simon’s puncture. But I completed 18-laps in total and I was happy with my pace.

“Allan [McNish] and I have discussed different aspects of the race in depth while having Marc as a team-mate is the additional bonus because he knows the place like the back of his hand.

“I’ve not raced at night although I experienced night time driving on a track for the first time earlier this year in a test at Paul Ricard. I’m certainly looking forward to that in the race at Le Mans.

“I’ve been training hard all year with this race in mind and I will continue my intense fitness preparations this week before Ihead back out to Le Mans this coming weekend. It isn’t the most physical track we go to as there are lots of long straights but you need a lot of stamina to get you through the 24 hours so I’ll be continuing my endurance training program, eating well and making sure I’m as fresh as possible.”

“My aim for this year's race is to be on the podium and if possible on the top spot. I’ve only ever been to Le Mans as a driver and only really became interested in the 24 hour race when I reached Formula One. But after that racing in the 24 hours was beyond my wildest dreams.

“The tough and quite dangerous race track, the atmosphere made because of the large number of spectators from around the world, racing at night and the amazing team spirit combine to make this race magical.

“The most satisfying element of the LM24 for me is the build up and formation lap into the race.”

Sam Hignett. Partner, JOTA Group: “JOTA’s goal is clear – we start our team’s biggest race of the year aiming to win the LM P2 class. It’s our eighth time at Le Mans and we’ve already enjoyed a fair amount of success there.

“We lost some time during the test day when debris caused a rear puncture approaching the second chicane midway through the afternoon session.

“Simon [Dolan] spun at high speed, didn’t contact anything but the flailing rubber caused bodywork damage. We made repairs and got Harry out for the final 20mins. In the end we completed 71-laps during the day.

“Our truck left Le Mans last Monday morning while all of the team personnel returned home before heading back to Le Mans this weekend [7-8 Jun] for the start of race week which begins with scrutineering, essentially technical checks of the car, on Monday [9 June].

“Being based on the Kent/Sussex border means we’re so close to Dover the better option is for us to work on our car in our own workshops while at the same time giving our team members the opportunity of spending some valuable time at home in advance of what is a mentally and physically exhausting week.”