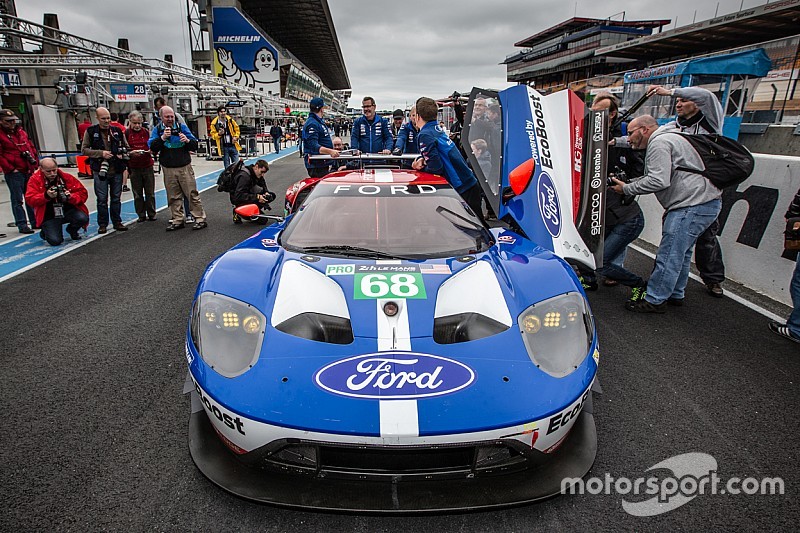 How is Ford celebrating its famous Le Mans victory in 1966? By trying to win the GTE Pro class 50 years on, as Filip Cleeren explains.

This June marks Ford's much anticipated return to the Le Mans 24 Hours as a full factory-backed force.

With George Howard-Chappell's Multimatic and American powerhouse Chip Ganassi Racing teaming up for a four-car assault on the French sportscar classic, the historical importance of the occasion is not lost on anyone inside the Blue Oval's organisation on either side of the Atlantic.

"The buzz around the factories is so huge. We went to the engine plant in Dagenham and the Dunton technical centre and did a big Q&A there with maybe 500 or 600 employees.

"Everyone is really excited for it on a company scale, not just within the race team - so you can imagine what it's like for the guys working on the cars day to day.

"As a driver, being able to take this car out down the Mulsanne straight is going to be a great experience."

Franchitti is just as impatient to take on the challenge, and gets his first chance to sample the car around the famous track on this weekend's Test Day.

"I am very proud to have the chance to go out and write or perform Ford's next chapter at Le Mans," adds Franchitti. "It's exciting.

"I like what they've done before and I hope that we can write another successful chapter. It's not going to be easy, but we have all the resources and elements to make it happen."

Andy Priaulx, the third ace up Ford's sleeve in the #67 entry, is no newcomer to grand-scale manufacturer efforts. Still, the decision to join Ford was an easy one for the Guernseyman.

"It's big. I've led the BMW DTM programme with the development of the car. I think this is a similar programme in terms of intensity," he says.

"For me it's a historic programme. That's why I'm super-proud and why I made the switch. It's been an absolute no-brainer for me. I'm very proud to be a part of it.

"That's genuine, that's not just PR stuff. It's a phenomenal programme," he adds.

To win the 24 Hours of Le Mans is a great feat as it is. To win it at the first time of asking would be a monumental milestone. "It's a massive effort," Franchitti acknowledges.

"To win it any time is a massive challenge but to go with a new team, a new car and try and win is not easy. But you have to aim high. We have to be trying our best."

Nobody knows more about aiming high than Chip Ganassi, whose famous organisation is primarily overseeing the IMSA arm of the programme, which started with the Rolex 24 Hours at Daytona.

When Tincknell tweeted about aiming for the podium at the WEC 6 Hours of Spa last month, Ganassi was quick to instill his trademark winning mentality on his young driver:

"I learnt a long time ago in sports, if you don't talk about winning, you're never going to win," Ganassi explains to Motorsport.com.

"You better start talking about it and figure out how to do it. In any endeavour I never aimed for the middle. You aim for the top. At least if you miss, you might hit the podium."

The Ford squad is up against stellar competition in the GTE-Pro class, with several established manufacturers like Ferrari, Corvette, Porsche and Aston Martin fighting for the win.

Despite Ferrari's strong run of form, Ford is wary of every opponent in equal measure.

"You tell me anyone in the GT programme that isn't a threat, they are all absolutely stonking", says Franchitti. "Great manufacturers, great teams, great drivers; there's no easy road here."

Chip Ganassi echoes Franchitti in his own inimitable style: "I look at all competitors the same way. I want to kick every one of their asses.

"I don't care who they are. It's nothing personal against them. That's what we're here to do. I hope they want to kick my ass!

"I can tell you this, I'm coming to Le Mans. If I didn't think I had a shot at winning, I wouldn't have come."

Jani confirms Porsche will revert to 2015 battery at Le Mans