SANTA CLARITA, Calif. – Honda Performance Development, along with partner teams Strakka Racing and Level 5 Motorsports, returns to the Circuit de la Sarthe this week as the racing division of American Honda Motor Co., Inc., seeks to extend its run of class victories and podium finishes at the 24 Hours of Le Mans. 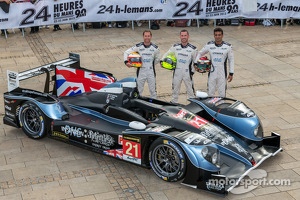 Since first appearing at Le Mans in 2010, HPD and its Honda-powered ARX prototypes have won the LMP2 category twice – in 2010 and again in 2012 – and finished on the class podium in all three years.

In LMP1, Strakka Racing will continue its battle for privateer honors with drivers Jonny Kane, Nick Leventis and Danny Watts against the two-car effort from Rebellion Racing, in addition to full-factory efforts from Audi and Toyota. British-based Strakka, which moved up to LMP1 in the World Endurance Championship in 2012, led HPD to victory in LMP2 at Le Mans in 2010, and this year will field an HPD ARX-03c, updated for 2013 and again powered by the race-proven Honda LM-V8 naturally aspirated engine.

In HPD’s first attempt at Le Mans, Strakka won the category and finished fifth overall, the highest-ever finishing position for an LMP2 entry. Strakka finished six laps ahead of its nearest competitor, and set a new record for laps and miles completed by an LMP2 entry, joining the elite “5,000-kilometer club” in the process.

“Returning to Le Mans, with both LMP1 and LMP2 programs, is an enormous challenge for our engineers and associates,” said Steve Eriksen, vice president and COO of HPD. “We understand the challenge for us in LMP1: Supplying a very strong, but private team in Strakka Racing with our improved ARX-03c, against the might of full factory efforts from Audi and Toyota.

But Honda and HPD have never been afraid to take on strong competition. As Mr. Honda said, ‘the best place to learn is at the highest level’. In endurance racing, there is no higher level than LMP1.

“In LMP2, we expect that the proven design of the ARX-03b chassis and HR28TT turbocharged V6 engine – plus the development and engineering expertise of HPD and its technical partners – will provide Level 5 Motorsports with the tools it needs to successfully defend our 2012 class victory. It will be an exciting race.”

One of the most successful prototype designs in recent years, intended for use by independent teams, the HPD ARX series has posted 55 victories and six endurance-racing championships since its introduction – and debut LMP2 victory – at the 12 Hours of Sebring in 2007.

The most recent wins for the ARX came in last month’s American Le Mans Series event at Laguna Seca Raceway in California, where Muscle Milk Pickett Racing won overall and LMP1 in an ARX-03c, while Level 5 claimed the LMP2 class with an ARX-03b.

The landmark 50th win for the ARX design came last year at the ALMS season-ending Petit Le Mans at Road Atlanta, again scored by Level 5 Motorsports. HPD has also been the most successful competitor in the LMP Green X Challenge, with 19 Green X Challenge awards under the HPD and Acura banners since the program recognizing “clean, fast and efficient” performance originated in 2006.

Honda Performance Development (HPD) is the Honda racing company within North America. Located in Santa Clarita, Calif., HPD is the technical operations center for high-performance Honda racing cars and engines. The company is marking its 20th anniversary in 2013.

HPD takes part in both the American Le Mans Series – where the company swept all manufacturer, engine, team and driver awards in the 2012 ALMS LMP1 and LMP2 categories – and the FIA World Endurance Championship, winning the inaugural LMP2 World Championship in 2012 along with the 24 Hours of Le Mans.

HPD offers a variety of race engines for track applications from prototype sports cars to karting; and showcases “fun-to-drive” products for professional, amateur and entry-level racers.

The chase for pole position is on!