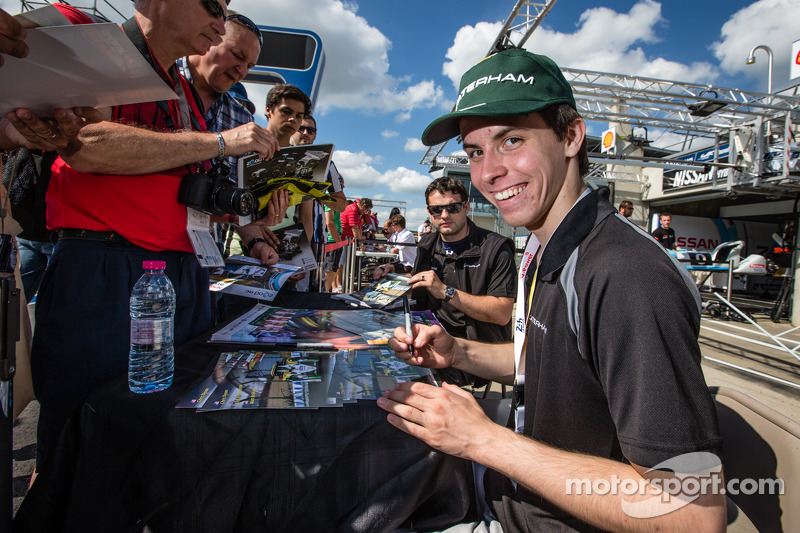 With the drop of the green flag on June 14th, 16-year-old Matt McMurry became the youngest starter in the long and storied history of the 24 Hours Le Mans, breaking the record for the French endurance classic set by Ricardo Rodriguez in 1959. And on the 15th, when the checkered flag finally waved, he entered the record books as the race’s youngest finisher, beating fellow American Gunnar Jeannette’s finish in 2000. The #42 Caterham Zytek-Nissan, which McMurry shared with Chris Dyson and Tom Kimber-Smith, finished tenth in the competitive LM P2 class on the Circuit de la Sarthe. Fielded by Greaves Motorsports, the car traveled over 2,700 miles in the 82nd running of the toughest endurance race in motorsports.

“This is a massive accomplishment for Matt McMurry, the McMurry family and for the Dyson Racing Junior Development program,” said Dyson, Vice President and Sporting Director of Dyson Racing. “Congratulations to Matt’s dad, Chris, on this Father’s Day achievement. To come over here and break two significant records is a notable success. I know Matt is going to be hungry to come back here. This is such a wonderful international event and no matter how many times we race here, we always look forward to coming back.”

Matt was just ten when he first saw the race with his dad and 12 when he set his sights on becoming the youngest driver to race in thhe event. Speaking after the race, Matt observed that “everything about Le Mans was new, big and incredible. I'm so happy to have had the chance to experience everything about it, the whole week long. Our team did a great job, I learned a lot from Chris and Tom, and we got a good result — we ran all 24 hours and had a respectable finish. I arrived with an eye on becoming the youngest driver ever at Le Mans, and thanks to everyone I’m now also the youngest finisher. It was a memorable day for Dyson Racing, Greaves Motorsport and me. Thanks to all the people over the years – and there were a lot of them – who made this possible for me.”

Tom Kimber-Smith has won the LM P2 class twice at Le Mans. “It's an achievement simply to finish such a challenging race,” he said. “There as so many things that can go wrong, so many opportunities to make that little mistake with the big consequence. We had a lot of goals going into the race but number one was to support Matt’s quest for the record and I’ll tell you, he did a great job. His first stint was in the rain, which wasn’t easy. But as a racing driver he’s mature beyond his years – he looked as if he had been driving on wet tracks for years. It's incredible he’s only 16.

Kimber-Smith also noted that “Chris drove fantastically all week, never putting a wheel wrong and he did the stints you’d expect to see from a two-time ALMS champ. It whas a real pleasure to drive with these guys and I cannot wait until the next event." And that next event won’t be long in coming. The trio will be back in Europe next month, driving the Greaves Motorsports Caterham entry in the third round of the European Le Mans Series at the Red Bull Ring in Austria, July 19-20.