Johnny Herbert was comfortably leading at the end of the sixth hour in his Audi Sport UK Team Veloqx. The Audi driver maintained the lead that was handed to him by Guy Smith in the fifth hour and he responded to pressure from the Audi Sport Japan ...

Johnny Herbert was comfortably leading at the end of the sixth hour in his Audi Sport UK Team Veloqx. The Audi driver maintained the lead that was handed to him by Guy Smith in the fifth hour and he responded to pressure from the Audi Sport Japan Team Goh car of Seiji Ara. 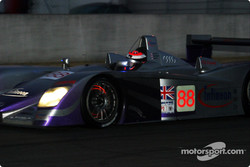 #88 Audi Sport UK Team Veloqx Audi R8: Jamie Davies, Johnny Herbert, Guy Smith.
Photo by Tom Haapanen.
In the LM GTS class Oliver Gavin, driving the #64 Corvette Racing C5-R, was leading the Prodrive Racing Ferrari 550 Maranello of Peter Kox by forty-five seconds and running fifth overall. "I encountered a lot of traffic nearly every lap in or around the Mulsanne chicanes which cost us some critical time on entry and exit speed", said Gavin, describing his first stint. "Still, we're doing fine and Olivier [Beretta] and Jan are doing a great job in the car."

The Petersen/White Lightening Porsche 911 GT3 RSR of Patrick Long was comfortably leading the GT class by nearly four minutes and running an impressive twelfth overall. "The car runs without any problems so far", said driver Jorg Bergmeister. "The track is pretty OK. Just in some of the braking zones it can be pretty slippery there."

The Rollcentre Racing Dallara Judd of Martin Short, which was running in fifth place, picked up a left-rear puncture in the final part of the circuit and limped back to the pitlane. At the same time the Panoz Motor Sport Elan car of Patrick Bourdais toured around the circuit and eventually stopped at Courbe du Buisson, shortly after the Indianapolis Esses, before rejoining later down in 39th place.

The Courage Competition AER of Sam Hancock, which was leading the LM P2 class and seventh overall, slowed on lap 63 and crawled around the circuit back to the pits. The mechanics worked on the rear of the car as they tried to fix a problem with the gearbox. The car eventually rejoined after twenty minutes way down the field.

The #18 Pescarolo Sport Judd of Erik Comas was running in third, one and a half minutes ahead of the Racing For Holland Dome Judd of Katsumoto Kaneishi. The Pescarolo Judd and the Racing For Holland Dome Judd swapped places in the pits during a driver change however and Benoit Treluyer returned to the track fifteen seconds ahead of Jan Lammers - the Dome then suffered a mechanical problem and had to pull into the garage for a lengthy pit stop.

Marco Werner pushed hard at the wheel of the repaired Champion Racing car, which Lehto had crashed on oil earlier in the race, and was repeatidly the fastest driver on track, lapping up to three seconds faster than the leader as he had moved up from 41st to 9th overall.

The Audi Sport UK Team Veloqx that Allan McNish crashed had also been repaired and rejoined the race with Pierre Kaffer but was running in 38th place and suffering from a loss of radio communications sustained in the accident and steering problems.

Johnny Herbert took over at the wheel of the leading Audi Sport UK Team Veloqx from Guy Smith midway though the fifth hour and returned still a lap ahead of Ara who was lapping at an alarming rate as he closed up the leader at around six seconds per lap. Herbert eventually responded to this pressure and upped his pace to match that of Ara, who had a big moment at the going onto the Mulsanne straight and drove through a gravel trap.

The Prodrive Racing Ferrari 550 Maranello had a trip through the gravel at the hands of former world rally champion Colin McRae and lost several places as the car was forced into the pits. 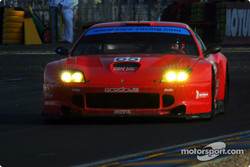 #65 Prodrive Racing Ferrari 550 Maranello: Colin McRae, Rickard Rydell, Darren Turner.
Photo by Tom Haapanen.
"I was at the Mulsanne Corner and had moved to one side of the track to let a prototype pass but got onto the marbles and the car started to spin," said McRae. "I tried to catch it but don't think I had enough revs and after that the clutch started slipping. We decided to change it and the team did a great job to get the car out again after about 30 minutes, although we unfortunately lost 8 laps in the process. It was a shame as my lap times were very consistent until then and I was beginning to get into a good rhythm."

Sadly the fifth hour saw the first official retirement from the race. The #10 Taurus Sports Racing Lola Caterpillar had to pit with repeated problems and the team eventually withdrew with a broken transmission. This brought a spate of retirements with the Panoz Motor Sports, Intersport Racing Lola Judd and PK Sport Ltd Porsche 911 GT3 RS cars all pulling out of the race. 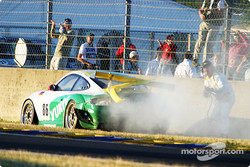 #86 Freisinger Motorsport smoking on the trackside.
Photo by Tom Haapanen.
At the close of the fifth hour Robert Nearn lost control of his Freisinger Motorsport Porsche 911 GT3 RSR at the exit of the Karting Esses and ran wide into the tyre barrier. The car then continued along against the wall and stopped a few hundred metres further down the track with a badly-damaged rear end. The car was later retired from the race.

The Gerard Welter WR of Tristan Gommendy then stopped along the Mulsanne straight and eventually rejoined in 42nd place. The Rachel Welter WR also suffered a problem an hour later and Yojiro Terda's car had to be pushed off the circuit

Tim Sugden suffered yet another puncture in the Thierry Perrier Porsche 911 GT3RS. The car ran off the circuit and then Sugden had to nurse the car back to the pits with the left rear tyre in shreds and damaged bodywork around it.

Pirro took over at the wheel of the Champion Audi after a quick pit stop and, on fresh tyres, was able to lap a couple of seconds faster than Werner had done towards the end of his stint.

Barrichello and Lammers team up for 2017 LMP2 entry