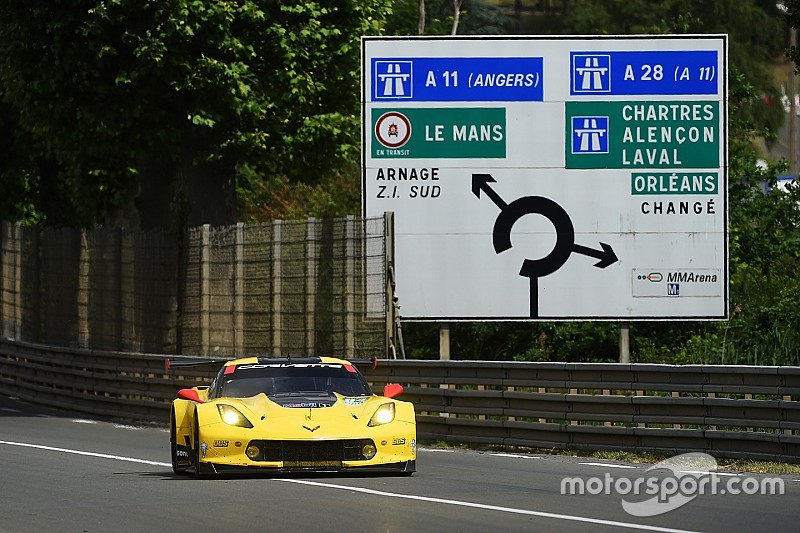 Corvette driver Oliver Gavin says the massive speed increase of the new generation of LMP2 cars means it will be “like having 30 LMP1 cars” in this year’s Le Mans 24 Hours.

The speed traps in Sunday’s official Le Mans test day were dominated by LMP2s, with the #47 Villorba Corse-entered Dallara P217-Gibson topping the charts at 341.3 km/h (212.1 mph).

Despite being a quicker in a straight line, the best LMP2 laptime around the Circuit de la Sarthe was a 3m28.146s set by Nelson Panciatici in the #35 Signatech Alpine Oreca 07-Gibson, some 10 seconds slower than the 3m18.132s set by Kamui Kobayashi in the #7 Toyota.

But Gavin believes the new-found speed of the LMP2s, which were eight seconds a lap faster on Sunday than at last year’s Le Mans test, will mean the GT drivers will have to be more alert when being lapped.

“It’s a bit like us having 30 or so LMP1 cars now, because the speed that a P2 car coming [up behind us] is not too different from the LMP1,” explained Gavin.

“It’s great they’re catching you and passing you quickly, but if there’s a big group of them, it’s going to cause some problems. You’ve just really got to be aware.

“Is it going to cause problems in the race? I’m sure there will be one or two incidents, because that’s the nature of the race, that’s part of Le Mans.”

Panciatici said the LMP2 speed increase has made life easier for drivers in the secondary division, as picking off GT cars in a straight line has become a much more straightforward task.

“It's a lot easier to overtake them because we're arriving a lot quicker, our top speed is much higher than last year,” said Panciatici. “Now we catch them more often.

“We also need to manage that. But when we're behind a GT car, it's easier to handle.”