Having already won three races since the start of the season, the ORECA 03 has once again proven itself in endurance racing.

Already on the LM P2 podium for the 2011 and 2012 Le Mans 24 Hours, the ORECA 03 once again finished in the top three in this year’s edition of the legendary endurance race. 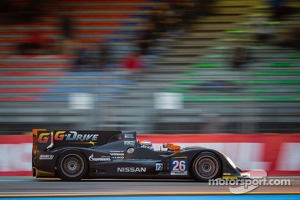 Leaders for the first third of the race, G-Drive Racing by Delta-ADR takes the third spot on the podium with John Martin, Mike Conway and Roman Rusinov.

Three other ORECA chassis cross the finish line in the top 10: Murphy Prototypes 7th, the Alpine A450, built and developed by ORECA, 9th, ahead of Race Performance.

As Boutsen Ginion Racing finishes in 12th, only two ORECA 03 cars did not take the checkered flag, after having off-track excursions during the race.

Having already won three races since the start of the season, the ORECA 03 has once again proven itself in endurance racing.

Hugues de Chaunac, President of Groupe ORECA: "The ORECA 03 takes its third consecutive podium finish, which proves the qualities of the car. Bravo to G-Drive Racing by Delta-Racing for their result, even if the team was aiming for the highest step on the podium and certainly deserved better.

To win the 24 Hours of Le Mans you must have a perfect race and not encounter the slightest delay. We can be proud of the teams who entered the ORECA 03: we’ll be back next year to take that win that is so precious to us as a constructor. Bravo to OAK Racing on their success.

Also, I’d like to congratulate the TOYOTA Racing team for their second place overal finish in the 24 Hours of Le Mans with their hybrid technology. ORECA is proud to be a part of the adventure in bringing operational support to their program.

Finally, we are thinking of Allan Simonsen and his friends and family, as well as all the members of the Aston Martin Racing team. Our sincerest condolences to them."

Simon Dowson, Team Manager G-Drive Racing by delta-ADR, ORECA 03-Nissan #26, 3rd LM P2: "We came here for the win. A podium finish at the 24 Hours of Le Mans is good for the team, but I can’t hide my disappointment. We lost two laps because of a lighted number that wasn’t working, and that’s the margin at the end.

The ORECA 03-Nissan was perfectly reliable, except for that tiny issue with the number. The three drivers of the No. 26 had a very good race, with solid stints from all of them. We tried to put pressure on the leaders, but they had good drivers as well, like Bertrand Baguette and Olivier Pla. We are disappointed for the No. 25, which was forced to retire relatively early in the race.

Now, we are focused on the FIA World Endurance Championship where we can still aim for the championship title."

Pierre Kaffer, Pecom Racing, ORECA 03-Nissan #49, 5th LM P2: "We suffered in these difficult weather conditions. The night was relatively positive, and we were competitive on a dry track, but on the wet it was more complicated for us. We also lost at least two laps due to safety car periods. I must admit that we are disappointed. We were all hoping for a better result.

The team once again did a great job and the ORECA 03 had not a single problem, that is what’s needed. It was a very difficult race Allan Simonsen (who passed away after an incident at the start of the race) was an old teammate of mine and there wasn’t a lap that went by that I wasn’t thinking of him."

Greg Murphy, Team Principal Murphy Prototypes, ORECA 03-Nissan #48, 7th LM P2: "We were among the quickest in LM P2 and we showed what we are capable of. I’m happy for that. We are a little disappointed because we were aiming for a podium finish, but I’m happy to see the team finish the 24 Hours of Le Mans. Our three drivers were very good and they fought hard to climb up the leaderboard. We’ll be back, and we’ll be looking for the win next time..."

Patric Niederhauser, Race Performance, ORECA 03-Judd #34, 10th LM P2: "Le Mans is simply an extraordinary event. I tried to prepare myself, but it’s the craziest thing I’ve ever done. We had a good start, making it to third position, then we had a few small mechanical issues. I have mixed feelings : I’m a little disappointed to not be higher in the finishing order, but I’m also happy to have finished the race. That’s more important than the rest. Le Mans was a superb experience."

Xavier Combet (Thiriet by TDS Racing, ORECA 03-Nissan #46), Retired: "The accident during qualifying put us under pressure technically : we had to rebuild the car in 24 hours and although the whole team was excellent, it still has its consequences, notably in terms of fatigue. The team was again very good during the race, but we were lacking track time from before the race to make changes to the setup. We were always between the fourth and sixth positions: it was satisfying even if we came here for more than that.

Then there was the rain shower and retirement. I’m disappointed for everyone on the team. I think it shows that it’s never over. It also reminds us that Le Mans is like Mt. Everest. We continue our Le Mans 24 Hours learning experience and it will serve in the future. Now we turn our attention back to the ELMS with the goal of conserving our title."

On Saturday at 3pm, the two G-Drive Racing by Delta-ADR ORECA 03 have a good start, with the No. 25 maintaining its second place, while the No. 26 climbs to the fourth position. Murphy Prototypes also has a good start, reaching sixth place, but must pit due to electrical issues just when the safety car enters the track.

After 58 minutes of neutralisation, the race restarts. Several ORECA 03 fight for the top spots, including Pecom Racing, Thiriet by TDS Racing and Race Performance. Murphy Prototypes, however has a small off during the fifth hour.

The rain made an appearance on several occasions, giving competitors difficult track conditions. Driven by Martin/Conway/Rusinov, the No. 26 G-Drive Racing by Delta-ADR perfectly handles the situation and takes the lead of the event after the first quarter of the race.

They would maintain command of the race until the middle of the eighth hour, when the car is forced to pit for six minutes to fix the lighting on one of its numbers. A short while later, the sister car, held up earlier due to a gear selection problem, is forced to retire after an accident in the Porsche curves. Meanwhile, Race Performance pits to tighten a bodywork connection before falling victim to an off just after midnight.

The No. 26 G-Drive Racing by Delta-ADR takes advantage of a night marked by several safety car periods to rejoin the top three, while Pecom Racing, trapped twice by the safety car, is still just outside the top five. Thiriet by TDS Racing follows, but at a distance, after a brake purge in the early morning hours. As for Murphy Prototypes, they keep climing the leaderboard thanks to a very quick Brendon Hartley.

During the late morning, the trio Martin/Conway/Rusinov turn up the pace and take third place. Race positions stabilise before a heavy rain shower hits part of the track at the start of the afternoon. Caught out by the apocalyptic conditions, Thiriet by TDS Racing is forced to retire after hitting the safety barrier with slightly over an hour to go in the race.

After racing twice around the clock, G-Drive Racing by Delta-ADR takes the checkered flag in third place. After a solid performance, Pecom Racing finishes in fifth, while Murphy Prototypes comes home in seventh after a good climb through the running order. The Alpine A450 and Race Performance also finish in the top 10, while Boutsen Ginion Racing, after running a conservative race, end the day in 12th place in class.