Olly managed to improve his fastest lap time today, but his best of 3:58.644 in the No.4 Corvette C6R placed him 7th in class

It has been a frustrating couple of days so far for Oliver Gavin and the Corvette Racing team at the 24 Hours of Le Mans in France. The considerable experience within the team has been put to the test as the team has struggled to match the pace of the front-running LMGTE Pro Aston Martins, Ferraris and Porsches.

Olly managed to improve his fastest lap time today, but his best of 3:58.644 in the No.4 Corvette C6R placed him 7th in class – a long way from the pole positions of the past. Both Corvettes have been struggling to determine the root of a handling problem which has hampered their progress, and the constant interruptions for both red flags and rain showers over the three qualifying sessions haven’t helped. 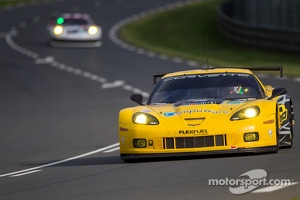 Olly said tonight: “We’ve never been in this kind of situation before and it makes it really hard for everyone. If you’re at the front and you’ve got a relatively sorted car then it’s not as critical to have that track time but we needed every minute there was available to help us get through our programme of planned changes.

“The fragmentation of the sessions has been frustrating but we’re not making excuses. This is the package we’ve come with but it’s not worked out for us so we’ve just got to work harder. Part of the problem has been that we haven’t run with this particular Michelin tyre before, while our competitors have (at the WEC 6 Hours of Spa Francorchamps) and we’re still learning about how to get the best out of it with our car.

“We’re catching up and we’ll spend lots of time tomorrow analysing all the data and seeing where we are. We’ve improved since yesterday and we are confident we’ll have a comfortable car for the race but it’s not been working out for us up until now!”