In a dress rehearsal for the 24 Hours of Le Mans, the Test Day gave teams entering ORECA chassis to rediscover their marks on the legendary Circuit de la Sarthe.

Under difficult and changing weather conditions, the nine cars designed in ORECA’s workshops – eight of which were powered by the Nissan V8 engine prepared by the company’s engine department based at Magny-Cours – experienced a positive test session. Next step for teams will be scrutineering in a week’s time.

Satisfaction for the ORECA chassis teams… 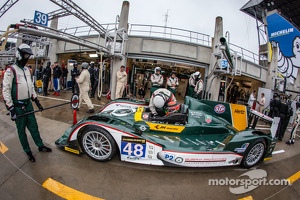 While the Alpine of Ragues/Gommendy/Panciatici, built and developed by ORECA, signed the fastest time in the morning session, no fewer than four ORECA chassis finished the day in the top five. It’s a positive general result in the eyes of Hugues de Chaunac, president of the ORECA Group. « As always, this Test Day was important in preparing for the 24 Hours of Le Mans. Because of the weather, we still need to be cautions regarding the significance of the performances, but globally it’s a satisfaction. The team’s encountered no problems and the Le Mans package seems to work well. We still need to confirm this during the practice sessions during race week, and even more so during the race, where we have big ambitions for our customer teams to celebrate the 40th anniversary of ORECA. »

Mission accomplished for Thiriet by TDS Racing
Much like several other teams, Thiriet by TDS Racing had a busy schedule planned for the day. The reigning European Le Mans Series championships needed to give their two new drivers, Ludovic Badey and Maxime Martin, the chance to come to grips with the car and track alongside Pierre Thiriet. « We were able to review everything we needed to. » explained Xavier Combet, team manager. « First, the drivers need to re-adapt to the track, especially Ludovic who was headed to Spa in the afternoon for GT Tour. We didn’t go looking for a fast time on a track that had not be raced on for a year, and which will evolve in the coming days. Because of the changing weather, we were able to see how the different tires function in a variety of conditions. Pierre was very comfortable on intermediates, while Maxime did a good job in the dry. The drivers are happy with the car and have confidence behind the wheel. That’s encouraging. »

While the two Alpine A450 chassis are in the top three, Thiriet by TDS Racing signed the fifth fastest time, behind the quickest of the two G-Drive by Delta-ADR ORECA 03s – the No. 26 of John Martin, Mike Conway and Roman Rusinov. The No. 25 sister car of Tor Graves, Shinji Nakano and Archie Hamilton also finished in the top 10. Peace of mind for Pecom Racing

Boutsen Ginion Racing, Murphy Prototypes and Race Performance completed their scheduled tesing program without issues, as did Pecom Racing, current leader in the FIA World Endurance Championship. Driving alongside Luis Perez Companc and Pierre Kaffer, Nicolas Minassian also came away with a positive feeling after the Test Day : « This type of weather was not simple to manage but we could encounter something similar during the race, so it’s actually interesting. We worked well on the Michelins, whether it be on the wet, drying, or dry track. We focused on simulating race conditions : the ending classification doesn’t reflect our potential and I’m not worried about that. The Le Mans package seems to offer a better top speed and the balace of the car is still good. In addition, Luis has made good progress compared to last year’s times and, like Pierre and I, he had a lot of track time. We’re on the right path. »