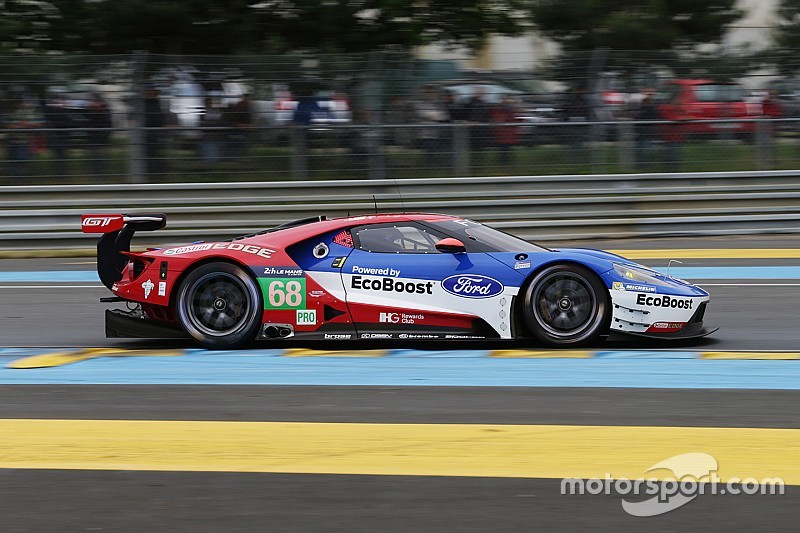 A light rain was falling and gray clouds hung low over the rolling French countryside, producing premature twilight as three prototype automobiles rolled across the finish line to end the 24 Hours of Le Mans for 1966.

So began the last press release that Ford issued from Le Mans in 1966. That race became the subject of a book by A.J. Baime titled “Go Like Hell!” – the words shouted by Bruce McLaren to Chris Amon as they drove to their famous victory. Fifty years on from that historic 1‑2-3 finish for the Ford GT40 at the world’s greatest endurance race, Ford is back.

The four Ford GTs run by the Ford Chip Ganassi Racing team take to the track at Le Mans today for the official Test Day. This is the first time the Ford GTs will run at Le Mans as the team prepares for the 24-hour race that starts at 15:00 CET on June 18.

“Fifty years ago, one of the most legendary moments in motorsports history took place as the duel between Ford and Ferrari took place on the track at Le Mans 1966,” said Bill Ford, executive chairman, Ford Motor Company. “Once again, all eyes will be focused on this legendary race as Ford returns to take on the best in endurance racing.”

The Ford GT race car is based on the new Ford GT supercar – the most advanced Ford production vehicle ever, featuring the latest in light-weighting, aerodynamics and EcoBoost engine technology, and an innovation showcase for the Ford brand. The Ford GT has been built to take on the toughest competition from Ferrari, Corvette, Porsche and Aston Martin in the ultimate battle of speed, endurance and efficiency.

“From the outset, we developed the all-new Ford GT to return Ford to the world of GT endurance racing,” said Raj Nair, executive vice president, Global Product Development and chief technical officer. “We’re pleased with the progress we’ve made so far, including winning at Laguna Seca and taking second place at Spa. We are looking forward to further pushing the capabilities of this next-generation GT at Le Mans.”

In 2016 Ford Chip Ganassi Racing is running two Ford GTs in the FIA World Endurance Championship and two in the IMSA WeatherTech SportsCar Championship. The WEC team, in only their second race, recently took second place at Spa Francorchamps in Belgium, putting them in second place in the WEC drivers’ and teams’ standings going into Le Mans. The IMSA team have four races under their belts and crucially the first race victory for the Ford GT after a great win at Laguna Seca in the U.S. This result moved them up to third place in in the IMSA drivers’ and teams’ standings.

"It is exciting for me personally and for all of Ford Chip Ganassi Racing to be going to Le Mans to race, especially given the 50th anniversary of Ford's historic 1966 win,” said Chip Ganassi. “We have enjoyed racing the new Ford GT this season and expect to be strong at Le Mans."