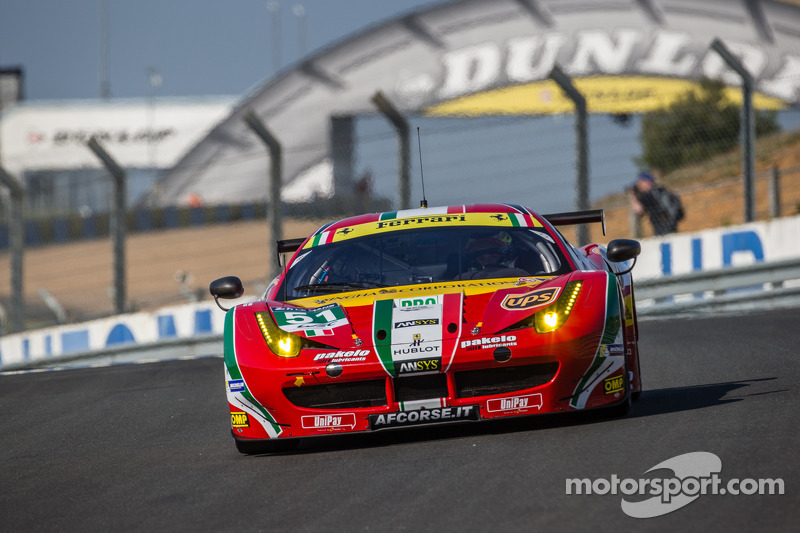 The race was won overall by the No. 2 Audi prototype driven by Marcel Fassler, Andre Lotterer and Benoit Treluyer.

The race was won overall by the No. 2 Audi prototype driven by Marcel Fassler, Andre Lotterer and Benoit Treluyer.

It was the second 24 Hours of Le Mans class victory for Fisichella, a full-time driver of the No. 62 Risi Competizione Ferrari 458 in the TUDOR Championship. The veteran Italian driver, who won three races in Formula 1, previously won the GTE Pro class at Le Mans in 2012.

Bruni qualified the car on the class pole position, but the No. 51 machine dropped back to sixth in the fifth hour. It steadily made its way back toward the front of the class field through the second quarter of the race and was second at the halfway point. 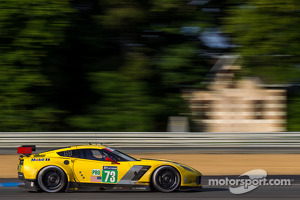 The team engaged in a battle for the class lead with the No. 97 Aston Martin shared by Darren Turner, Stefan Mucke and Bruno Senna from the 13th to 15th hours of the race, but the Ferrari took the lead for good in the 16th hour.

“It’s great,” Fisichella said. “It’s the most important race, maybe in the world. Winning that race for the second time, I’m really proud of it. The team did a fantastic job through the pit stops. The car was very, very good, very reliable. I think that was the key to winning the race.

“The next [TUDOR Championship] race will be Watkins Glen [June 29]. I’m looking forward to it. I have no idea about the circuit; I’ve never been there. Soon, I will try to get some onboard cameras to know the circuit. I spoke with my teammate, Pierre Kaffer, who has been there for testing and he gave me some advice. He told me it’s a great circuit, so I’m looking forward to it.”

The No. 73 Corvette Racing team of Jan Magnussen, Antonio Garcia and Jordan Taylor battled back from early adversity to earn a second place result in GTE Pro. The Corvette C7.R team encountered a problem with its air jack during a pit stop in the second quarter of the race, putting the team almost two laps down to the leaders.

They got back on the lead lap before the halfway point, but it was still a long distance behind on the 8.49-mile circuit. The team ran in fifth place through most of the overnight hours, before steadily working its way toward the front. Garcia took over second in the 23rd hour of the race and crossed the finish line one lap behind the winning Ferrari.

“It’s not a win, but I’m very, very happy for the team,” Magnussen said. “We had a great race. We had one issue in the pit that cost us a lap, probably, with an air jack failure, which was a shame.

“With the safety cars, we got put back one-third lap every time. Three times, we were the first car behind the safety car, and you lose a lot with that, but that’s how it goes. We had a great car the whole race.”

Every GTE Pro car in the top five had at least one TUDOR Championship regular in it. Richard Lietz, who won the Rolex 24 At Daytona in January, finished third at Le Mans in the No. 92 Porsche Team Manthey entry alongside co-drivers Marco Holzer and Frederic Makowiecki.

Fourth place went to Oliver Gavin, Tommy Milner and Richard Westbrook in the No. 74 Corvette, followed by Jeroen Bleekemolen and Cooper MacNeil, who finished fifth in the No. 79 Porsche as the only two-driver lineup in the field.

IMSA was also well represented in the LM P2 and GTE Am classes. In LM P2, OAK Racing – which fields a full-time TUDOR Championship Prototype entry – led the race with its No. 35 Ligier-Nissan co-driven by Alex Brundle, Jann Mardenborough and Mark Shulzhitskiy until encountering an engine problem with five hours remaining. They got back into the class lead with two hours left, but the engine issues left them down on power and relegated the No. 35 to fifth at the finish.

Co-drivers Patrick Dempsey, Joe Foster and Patrick Long took fifth in class in the No. 77 Dempsey Racing-Proton Porsche. Long led the early portions of the race, but incurred a three-minute penalty for spinning his tires on pit lane, removing the team from victory contention.