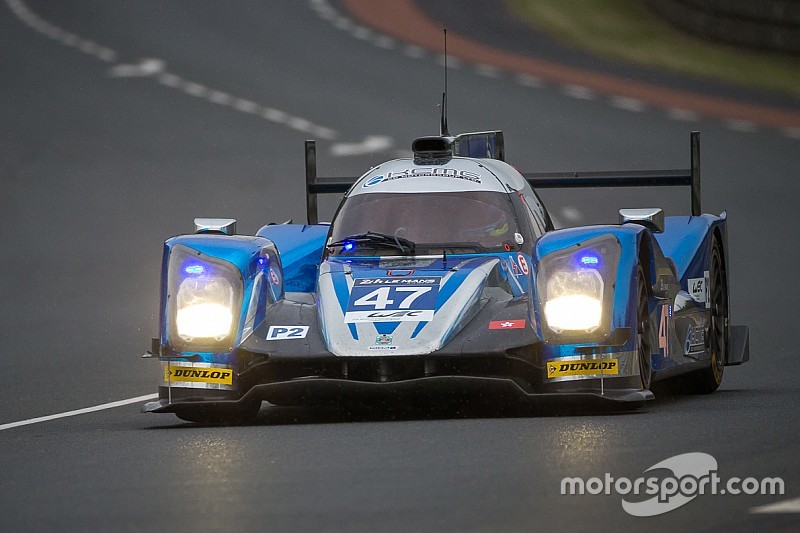 The new ORECA 05 took an impressive pole position for its first participation in the 24 Hours of Le Mans.

Author of the fastest time during the first qualifying session of the 24 Hours of Le Mans yesterday, KCMG maintained control of the LM P2 class throughout the final two sessions. Against particularly tough competition, the new ORECA 05 took an impressive pole position for its first participation in the famed endurance race.

A performance making it a worthy successor to the ORECA 03, which took pole in 2011 and 2012. In the second ORECA 05, Thiriet by TDS Racing will start from the third row, next to the Alpine A450b, which was also designed and built by ORECA Technology and entered by the Signatech-Alpine team. The contingency of ORECA chassis will take the start on Saturday at 3pm looking to give the manufacturer its first Le Mans success.

A little more than three months after its first roll out, the new ORECA 05 LM P2 continues to progress, with its first podium finish coming at Silverstone, first win at Imola and now its first pole position at Le Mans. It’s true that most competitors are concentrating on the race, but it’s also true that they all wanted the honor of pole position. Thanks to the Asian team KCMG, the ORECA 05 LM P2 has written another line in its young history.

" I’m very happy for KCMG and the whole team of people at ORECA Technology " said Hugues de Chaunac, President of the ORECA Group. " The pole is not a determining factor at the 24 Hours of Le Mans, but it’s a strong symbol. We’ve had that success with the ORECA 03 in the past, but we’ve just missed out these last two years. It’s nice to back up front, and even more so because the ORECA 05 is still a new car.

After doing well on traditional circuits, this confirms the car’s competitiveness on a unique track. The hardest is yet to come. Le Mans, for such a young prototype, is a difficult challenge and, despite the pole, we have to take it on with a lot of humility. We’re savouring the moment with KCMG and its drivers, but we’re already thinking ahead to the race. Thiriet by TDS Racing is also on the pace and I know the ORECA 03R and Alpine A450b have their own cards to play. Our motivation is equal to the challenge. "

Although rain was expected, it was on a dry circuit that the second and third qualifying sessions took place. This allowed teams to continue their quest to find the best settings for the 83rd edition of the 24 Hours of Le Mans. Author of the fastest lap on Wednesday, KCMG held on to its place on top of the timesheets. Richard Bradley, Matt Howson and Nicolas Lapierre fine-tuned their ORECA 05 settings, despite breaking a damper on a kerb. The Asian team then used parts on the car that will be used in the race, to get them broken in.

" We’re happy to be on pole and especially satisfied to see that the car handles well in all conditions " explains Nicolas Lapierre. " We have good top speed, the car is comfortable and we’re starting from pole. We’re in a favorable position, but we know that the race will be difficult and very contested in LM P2. We have to be error-free. The ORECA 05 is still a new car and the reliability will have to be perfect. We had a small issue with a damper, but it was quickly rectified. We’re looking forward to get the battle started ! "

Thiriet by TDS Racing ahead in Q2

Signatech-Alpine rejoins the top 5 in Q3…

Also starting the race with the new ORECA 05, Thiriet by TDS Racing improved on its time from the previous evening. With the fastest time of the second qualifying session, the French team was forced to settle for sixth place in class after three sessions. Tristan Gommendy, Pierre Thiriet and Ludovic Badey also saw their final run shortened by a suspension issue.

" We were missing a little in the set up to go find the pole, but we have a very good car for the race " underlines Pierre Thiriet. " We progressed well in terms of settings compared to the Test Day and Wednesday’s practice. The car is better to drive, including on longer stints. We could still find some improvements but overall she’s easy to drive. We gained on trap speeds and our rhythm improved. That’s positive and we’re on the right path. "

With the Alpine A450b, Signatech-Alpine also improved its time. The two-time ELMS champion team, with Nelson Panciatici, Paul-Loup Chatin and Vincent Capillaire on driving duties, will start from fifth place in LM P2. Then comes Murphy Prototypes, which was able to climb to eigth place following its accident the night before. Following team boss Greg Murphy’s instructions, Nathanaël Berthon, Karun Chandhok and Mark Patterson focused on the setup.

" I must say that I’m thrilled because we have a car with an excellent balance " added Mark Patterson. " The handling under braking is good, we have good top speed and the car is reacting well… We quite simply have a better package ! After my accident, I was a bit worried about my first lap back out, but I was able to forget all that and moved on to other things. The guys did a superb job. It’s incredible what they did. They gave it all and they’re ready to give it their all again. The team spirit is just fantastic. "

Ibanez Racing completes the ORECA line up in LM P2 with José Ibanez, Pierre Perret and Ivan Bellarosa. Entered in LM P1, the two REBELLION R-One, designed and built by ORECA, will start in the top 10 overall, with the No. 12 ahead of the No. 13.