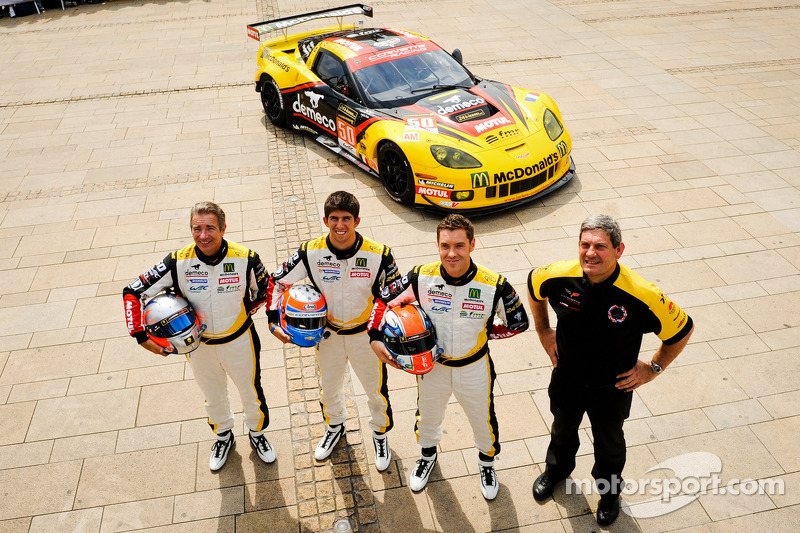 Over a week might has passed since the event’s official Test Day on June 9 but the French squad has not wasted a moment in its efforts to capture a third consecutive GTE Am class victory, and fourth in succession, with its pair of Corvette C6.Rs.

After all of the drivers were assessed by Larbre’s physical trainer Jerome Vassia, it was on to the National Centre for the Training of the Gendarmerie Forces (CNEFG) in Saint Astier near Perigueux where a special programme of activities, designed to instil team spirit, had been planned high in the tree tops. 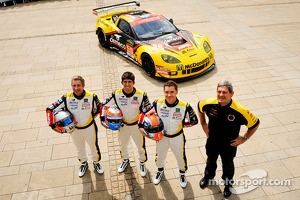 Corvette factory driver Taylor then headed to America to fulfil his Grand-Am commitments, but was back in France, along with the rest of the team, for scrutineering at La Republique Square on Monday.

Patrick Bornhauser, #50 Corvette C6.R: “The camp at the Golf du Medoc again went well and allowed us to better get to know our new American team-mates. We completed the training course with the French gendarmerie, which included some new exercises that all of the drivers completed with flying colours. Then on Monday we had scrutineering in downtown Le Mans. Once again it was a huge success as a lot of media attended and asked us if we could win the class for the third time in a row. The car and all of the drivers were passed fit for the race so all that’s left is to get out on track and see what happens. Let’s wait and see.”

Julien Canal, #50 Corvette C6.R: “We spent three great days at the training camp where Jérôme Vassia and Jack Leconte surprised me again! We have become closer, bonded and got to know each other better. I discovered different and very interesting character traits amongst the other drivers that I did not know about beforehand. I’d like to thank Larbre for that unforgettable experience. Scrutineering meanwhile is always a special moment, especially as I live in Le Mans. We can get closer to the public who get involved and help to create a warm atmosphere. It’s a great place to meet and chat with the fans and members of the media.”

Ricky Taylor, #50 Corvette C6.R: “I didn’t know what to expect ahead of the training camp, but the bond created between everyone was amazing. We all overcame our fears and struggled through some difficult exercises that required us to work together. I had a great time! I arrived at Le Mans following the Grand-Am race at Mid-Ohio over the weekend and have shifted my focus to concentrate entirely on this race. I’m delighted to have arrived without any issues and can’t wait to get out on track with the team to get a feel for it in dry conditions. Working with Larbre has been an excellent experience and I’m looking forward to continuing to build on our relationship this weekend.”

Manu Rodrigues, #70 Corvette C6.R: “The three-day training camp was a dream and everyone worked well together. Everybody was pulling or pushing in the same direction and this compensated for our differing physiques. In addition, the other drivers were relying on you, so there was no way you could disappoint them. The Gendarmes team was exceptional. Attending scrutineering with a team like Larbre, which has a big reputation and notoriety, is quite impressive. It is well structured and you can’t fail to be impressed. Everything is looked after 100% and you don’t feel alone: you are part of a team. In fact, you are the team. We have two great cars, two great crews and two great driver line-ups. Everything comes together to achieve our single goal: to finish in the best possible position.”

Philippe Dumas, #70 Corvette C6.R: “The training camp was a great idea to improve the team’s cohesion and there was a friendly atmosphere. After that you feel ready to participate in this team event. The two young American drivers are fantastic and have different personalities. To attend scrutineering in downtown Le Mans for the first time was one of the week’s special moments, and you can’t fail to enjoy it. To be part of a structure so well organised can only give you pleasure. My situation is quite unusual as I am also the Team Manager of a different outfit, so to find myself racing for Jack Leconte’s team is not common! It’s a great feeling. All that’s left to do is take part.”

Cooper MacNeil, #70 Corvette C6.R: “After the June 9th test, where we finished in the top eight of the GTE Am class, the drivers and team boss Jack Leconte went to Bordeaux for some team building. We had a great experience working out with the French National Guard. The drill instructors put us in fatigues and we jumped over logs, went through the obstacle course, helped each other climb a vertical wall and even crawled on our elbows through barbed wire. It was a very unique experience and great way to get to know my co-drivers Manu and Philippe better. During the rest of our stay in Bordeaux we kept physically fit by mountain biking and circuit training. We returned to Le Mans last Saturday for scrutineering. It’s a great way for the fans to get close to the cars and the drivers in the historic setting of downtown Le Mans. It was great! I must have signed 200 autographs. The European fans really like the American-made Corvette. It is a great part of the entire race experience. This is where you see the classic photos of the car, team members and drivers. It is a great way to present the team to the fans prior to the race.”

Jack Leconte, Team Manager: “As soon as the Test Day finished we headed straight for the Le Mans Arnage Airport where Patrick Bornhauser’s plane was waiting to fly us to the Golf du Medoc in Bordeaux. The following day we were welcomed at the National Centre for the Training of the Gendarmerie Forces (CNEFG) in Saint Astier near Perigueux. It now has a partnership with the Larbre team and, knowing the commitment of our drivers, an intense programme had been organised. The American drivers, who had not experienced these activities before, were happy to have a go once the surprise had sunk in! The team spent most of the day 25 metres above the ground. As all the activities could only be completed with everyone’s input, a strong spirit was able to spread throughout the team. Everyone then arrived at La Republique Square in Le Mans on Monday. Ricky Taylor only got there 20 minutes before scrutineering as he had been racing in the Grand-Am event at Mid-Ohio on the Saturday!”

The final two qualifying sessions take place on Thursday ahead of Saturday’s race, which begins at 3pm local time.