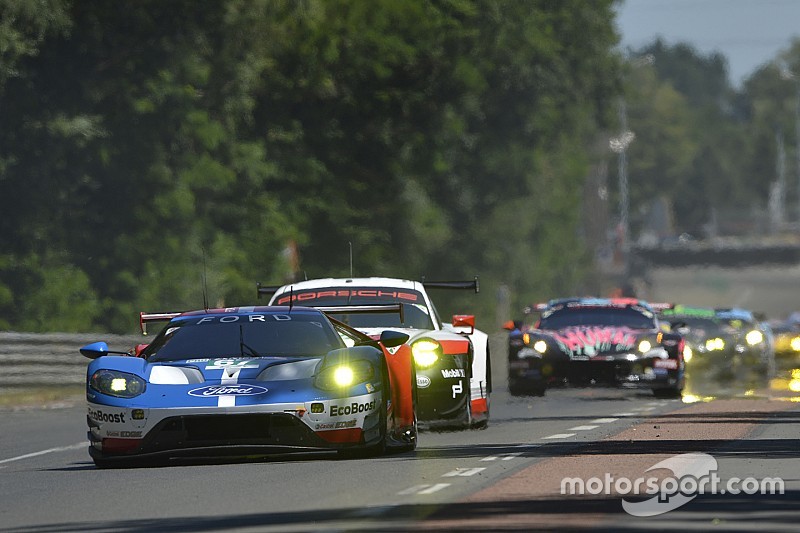 Ford driver Harry Tincknell has described the dramatic final lap of the raging GTE Pro battle in the Le Mans 24 Hours, when he snatched second in class from Jordan Taylor's Corvette.

Tincknell started the final lap of the French endurance classic in third position, and was set to coast home for the bottom step of the podium in the Ganassi-run #67 Ford GT, behind the #63 Corvette and the #97 Aston Martin, which were disputing the lead.

But when Taylor suffered a puncture shortly after running through the gravel at the second Mulsanne chicane while being chased hard by Jonny Adam's #97 Aston, Tincknell was ordered by engineer David Wilcock, to push and hunt down the stricken Corvette.

“Once the [#91] Porsche stopped and we realised we had third position, we were in full chilled mode, no kerbs and short-shifting to the flag, no risk at all,” Tincknell told Motorsport.com.

“I was going up to the Ford chicane on what was the penultimate lap and then all hell broke loose and they told me to push. I started the last lap on maximum attack and started smashing the kerbs and going after the Corvette on full quali mode.

“I was going through Indianapolis and they came back on the radio and said: ‘He’s just gone out of Arnage...’ So I looked ahead and sure enough there he was going into the Porsche Curves.

"But he was going mega-fast for someone who had a puncture and I wasn’t actually sure if I could catch him or not.

“I got him at the exit of the Porsche Curves and up to the Ford Chicane. It was like a bloody movie or something, like a madman had scripted it!

"It felt like the whole garage was in the car with me. I could hear them cheering on the radio so loudly. It was mental!”

Tincknell and his teammates Pipo Derani and Andy Priaulx fought back from an early downshifting issue to get in to the mix for a podium position along with the #91 Porsche 911 RSR.

“We knew that second stint on the tyre pace would be better than outright pace,” he said. “It certainly showed that we weren’t challenging for fastest lap of the race but after that initial peak of the tyre we were really competitive and in my opening stint I was able to pass some of the opposition.

"The straight-line speeds were very similar so it made it very raceable but the Aston had just a bit too much grunt off the corner which made it hard to overtake.

Tincknell also praised the close competition of the GTE Pro field, as all five marques were in contention for victory at certain stages of the race.

“As drivers we were destroyed after the stints, we dragged everything out of ourselves and things were so close,” he said.

“To have so many cars in contention in to the last hour was fantastic stuff for the fans and also us as racers.”

Toyota suggests hybrid tech "not yet ready" for Le Mans