One more changes on the final entry list for the upcoming 24 Hours of Le Mans: Lotus team is out, Millenium Racing is in.

168 drivers will start the 2014 Le Mans 24 Hours on 14th June. Today the Automobile Club de l’Ouest has published the list of all the drivers entered for the 82nd event. The Lotus team had withdrawn and will be replaced by Millenium Racing.

On 14th May at the latest the teams entered for the Le Mans 24 Hours (14 and 15 June) had to send in the names of the drivers for the 56 cars. After the usual checking procedures this list is published today. 168 drivers with licences from 26 different countries will be present in the Sarthe.

The highest number comes from France (39) followed by the British (29), Americans (17) and Italians (15). There is also a considerable Russian presence (8), and at least one Swiss driver in the teams entered in LM P1. Of the four categories the one with the biggest number of different licences is GTE Am with 19 nationalities represented.

There is one change on the list of entries. Due to a lack of preparation the Lotus team is unable to honour its invitation for the Le Mans 24 Hours. The ACO has worked hand in hand with this team for it to be present and gives it its confidence for the future. 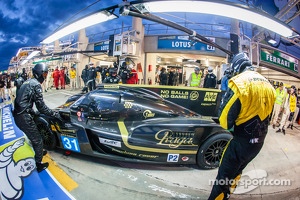 This brand-new LM P1 should be at Le Mans during the 24-Hours week, and may take part in the final rounds of the FIA World Endurance Championship starting with the Circuit of the Americas on 20th September 2014.

The no. 22 Oreca 03-Nissan entered by the Millenium Racing team driven by Giroix, Martin and Turvey will replace it.