The Ford GT squad has vehemently denied allegations of hiding performance in the run-up to the Le Mans 24 Hours following the American brand's spectacular first qualifying showing on Wednesday evening. 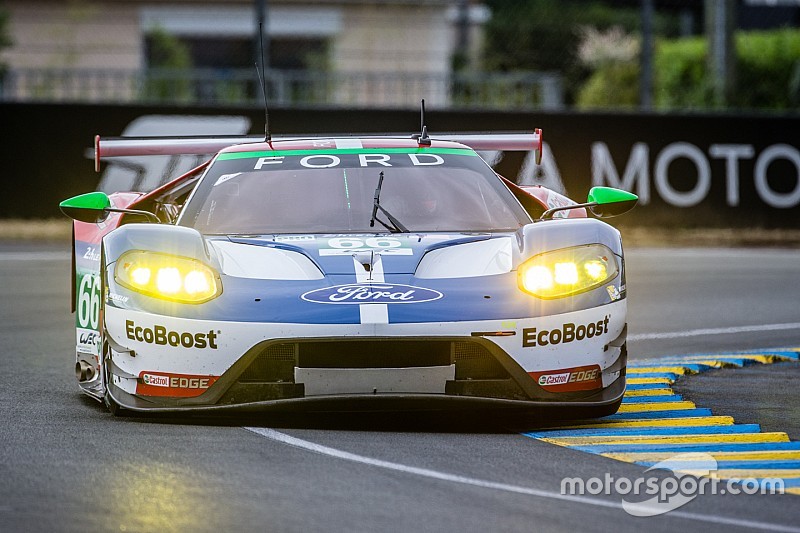 Larry Holt, the Vice-President of Multimatic - the company which was instrumental in bringing the Blue Oval back to top-level endurance racing, and which was a cornerstone in designing and building the new car - declared that Ford’s competitors were "whining and moaning."

“What you saw last night was absolute getting a bunch of guys, two major OEMs in a Ford/Ferrari battle," said Holt. "That’s what everybody wants to see:Ferrari and Ford hammering it out.

"And all these other guys, like Corvette, who got hit with a BoP [penalty], there’s no way they are as slow as they showed last night. That’s complete bullshit.”

According to Holt, the Ford GT, which was as much as five seconds faster in qualifying than during the test day, went quicker than expected due to a combination of circumstances.

“We took every advantage, obviously, like low fuel," said Holt. “We knew we were going to go faster. We know where the car should be, but we hadn’t realised that lap time for a whole bunch of different reasons.”

Holt went on to state that the majority of running before qualifying had concentrated on reliability, and not performance work.

“There was a lot of maintenance-type work, correlating our fuel consumption, tyre wear, brake pad wear and so on through the test," he continued. "We were just running a lot of laps, making sure that we could do the required 14 [laps] on fuel."

“All that sort of thing was going on at the test, observed by the FIA. So, we did some fast laps,but nothing spectacular and ended up with a 3m56s knowing full well that the car should be capable, on race pace, of probably mid-3m54s, which is our target race pace time.”

Holt claims that several stars became aligned on Wednesday for at least some of the Ford GTs to go for an all-out fast lap, a decision sanctioned by Ford chiefs Raj Nair and Dave Pericak.

“It became a big qualifying battle last night,” said Holt. “Then Ferrari stepped it up and all of a sudden we were strapping on slicks and running low [fuel] tanks and putting in the fast guys.

Holt also maintains that the atmospheric pressure contributed to the spectacular lap times in Q1.

“They [the ACO] declare an atmospheric barometric pressure that we run to on the turbo cars,” he explained.

“Last night the actual barometric pressure was significantly less than [usual], I think they declared 1019 millibar for what they think it is going to be over the weekend, and last night it was actually something like 950.

Suggesting that there was not much more pace that could be squeezed out of the Ford GT, Holt admitted that there is an expectation the car will be pegged back by the ACO and the FIA.

"I don’t expect to be left alone now because of the how BoP works," he conceded. “I’m waiting for a lightning bolt to hit me in the head. We were four tenths up on the Ferrari.

"I would think they will probably do something to pull us back about half a second. So I would say you probably saw the most out of the car in qualifying."

"We did not hide performance"

Holt was direct in his answer about possible sandbagging before qualifying, saying: “Did we hide anything before last night? No, we never hid any performance per se.

"There’s nothing sneaky under the table. But we never went out to set a qualifying lap time.

“Where did the Ferrari time came from? They were three seconds quicker too. You do that in qualifying. That was an absolutely balls-out qualifying lap.

"I think there’s probably over a second in the atmospheric table and a little bit [extra] just because we got carried away. I mean, Dirk [Muller] put one in right on the last lap. He got a tow, saw 301kph [on the Mulsanne straight].

Holt was quick to express the notion that the aerodynamic advantage of the Ford GT was also a significant part of its blistering speed in qualifying, and that Ferrari has more power at its disposal.

“They [ACO/FIA] watch you all the time and they never said: ‘Oh, you guys are sandbagging’. I mean they look at the data," said Holt. "We’re very fast, if you look at our top speeds, trap speeds.

"But if you look at the car, it’s very small. It’s got a frontal area way less than the competitors. But we’re down on power. It’s significantly less.

"The BoP power curve, the power/boost table, is providing much less power to us than Ferrari."

The remaining manufacturers in GTE Pro - Porsche, Aston Martin and Corvette - were all significantly slower than Ford and Ferrari, which between them locked out the top seven positions in class.

But Holt said he was convinced that Corvette, whose cars ended up at the bottom of the times, performed their own sandbagging exercise in order to be given a performance break for the race.

"But the other guys, the guys that are whining about it, and moaning and hiding their performance, I have no time for them.”

“If they want to have this classic Ferrari/Ford battle that they keep talking about, last night we showed them a little bit of that action. It’s an entertainment thing, right?

"And in the end I’m not going to bitch if the ACO/FIA gives them a balance of performance advantage to catch us up. But I don’t believe they are all as slow as they’re showing. That’s nonsense.”

Any final changes in the LMGTE Pro BoP would be confirmed on Friday ahead of the race on the Saturday.