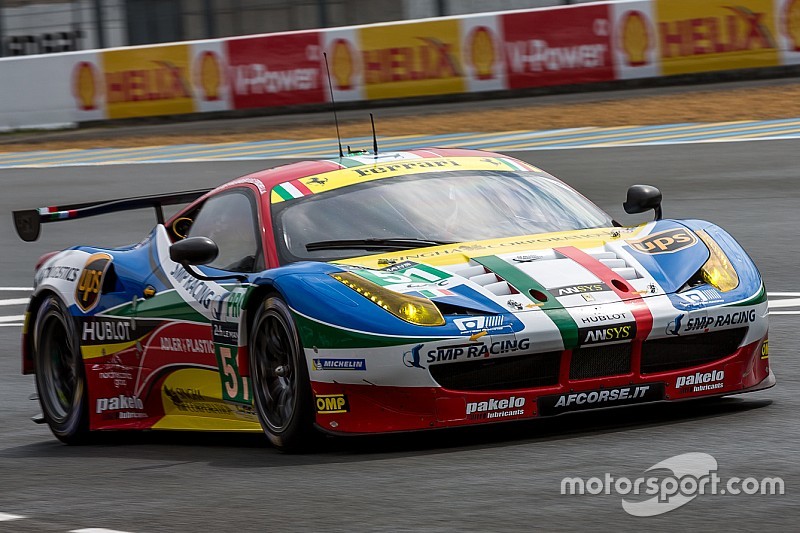 The Ferraris came back strongly in the GTE-Pro and in GTE-Am class confirmed their role of solid contenders for victory.

Le Mans, 12 June – Qualifying are finished at the 83rd edition of the Le Mans 24 Hours and the Ferraris came back strongly in the GTE-Pro class after the problems at Tertre Rouge on Wednesday which cost the cancellation of their times to both “Gimmi” Bruni (car 51) and James Calado (car 71). The cars entered in the GTE-Am class confirmed their role of solid contenders for victory.

Luckily, the much-feared arrival of the rain did not materialise and qualifying were thus held under normal track conditions. This does not mean that everything went smoothly without hitches, as there were numerous yellow flags which forced the drivers to slow down; there were also some red flags. The third and decisive session started ahead of schedule in order to make up for the time lost in the second session after the accident of Jan Magnussen's Chevrolet.

“Gimmi” Bruni, who needed to complete his qualification laps at night, was the first to come out, at the wheel of the Ferrari 458 Italia number 51. The WEC 2014 world champion pushed immediately to the limit, quickly bringing his car into second place, behind the Aston Martin number 99 of Stanaway-Rees-MacDowell. Car 71 too was able to comeback, with James Calado at the wheel, and tomorrow it will start in fourth place, with a time just a whisker behind that of the Aston Martin number 97.

Two Ferraris confirmed themselves in second and third place in the GTE-Am class: we refer to car number 83 of AF Corse, with Perrodo-Collard-Aguas and car number 72 of the SMP Racing team driven by Shaytar-Basov-Bertolini. They will be the immediate pursuers of the Aston Martin number 98 of Dalla Lana-Lamy-Lauda, but four more 458 Italia will be ready for battle tomorrow.

In fact, cars number 55 (Mortimer-Cameron- Griffin) and 61 (Mann-Cressoni-Giammaria) of AF Corse are in sixth and seventh place respectively in the class, followed by car number 62 of Scuderia Corsa driven by Bell- Sweedler-Segal in eighth place. Car number 66 of JMW Motorsport team driven by Al Faisal-Giermaziak-Avenatti is in eleventh position. No more activity on the track today: the drivers will be at centre stage in the parade held at the city centre.