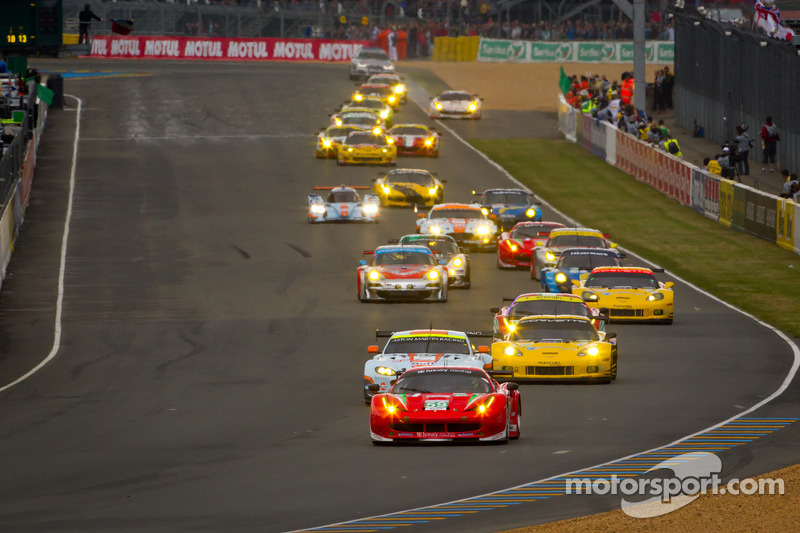 The 80th running of the Le Mans 24 hour race once again produced an exciting race which was anything but predictable, the GTE-Am class not being decided until the closing minutes of the race.

GTE-Pro –From Zero to Heroes – AF Corse win after almost not making the start. 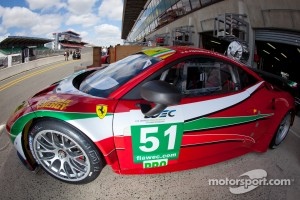 First across the line was the #51 AF Corse Ferrari F458 Italia; driven by Giancarlo Fisichella, Gianmaria Bruni and Toni Vilander. The car which needed to be reshelled following an accident on Wednesday was completely rebuilt in just over a day, not running until the dying moments of Q3 on Thursday evening and then starting from towards the back of the grid. However, It’s very strong driver line-up meant that rising through the field would not take too long. The car inherited the lead just before the half way mark of the race during the night when the #74 Corvette hit trouble, and never looked back. Apart from an occasional spin and the team having to abort a pitstop when the car in a neighboring pit was on fire the car had what can be considered to be a perfect run, giving AF Corse their first ever class victory at Le Mans

Second place went to the car that held pole position in GTE-Pro, the #59 Luxury Racing Ferrari F458 Italia, driven by Frederic Makowiecki, Jaime Melo and Dominick Farnbacher. After a strong qualifying effort by Makowiecki the car quickly was left behind at the start scrapping for fifth and sixth place by the end of a frantic first hour. A mistake during the first pitstop probably ruined the car's chance of winning though, running out of fuel at the pitlane entry and having to be pushed to its pit to refuel. The car floated between fifth and sixth places for the first 11 hours, some slick pitwork and incident free driving bringing the car to fourth place, then it benefited from the demise of the Corvettes moving to second overall and not relinquishing this position for the rest of the race. The mistake during the first stop and then being in the wrong group during the major safety car period of the race prevented it from challenging for the class lead, as the car certainly had the required pace.

Aston Martin recorded a podium at the first Le Mans outing for their new V8 Vantage, the #97 car being driven by Stefan Mucke, Darren Turner and Adrian Fernandez to third place. Turner having qualified the car second on the grid. This finish makes up for the poor result these drivers had in 2011, recording a tiny handful of laps before retiring in the troublesome AMR-ONE LMP1 car. The Vantage ran very reliably and made up for disappointments in both Sebring and Spa where it was fast, but frail. Mucke lead the class for the opening hour but pushed by Oliver Gavin in the #74 Corvette all the way. The team never dropped out of the top six, taking advantage of safety car periods and the only big mistake they made was when Mucke hit the tyrewall at Indianapolis just before 7am, but thankfully the damage was minor and they held onto 3rd place until the flag dropped. 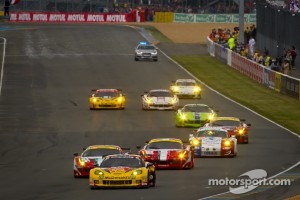 First in the very closely contested GTE-Am battle was the #50 Larbre Competition Corvette C6R, driven by Patrick Bornhauser, Julien Canal, and Pedro Lamy. The car inherited the lead just before the 5 hour mark, and never lost it when the #79 Flying Lizards Porsche lost its strong lead and never fully recovered from a fluid leak. This was the closest battle of the race, the Corvette being in an almost constant battle with the #67 Porsche. The gap was measured in seconds, the battle not being resolved until the dying moments of the race when the Porsche suffered a puncture, but then oddly on its last lap the Corvette pitted to change drivers. A most bizarre ending to a fantastic win by Larbre.

Porsche power prevailed with the #67 IMSA Performance Matmut Porsche 997 finishing second, driven by Anthony Pons, Raymond Narac and Nicolas Armindo. The car had the dubious honour of being the first car to tangle with a LMP1 car while being lapped, but its encounter with the #7 Toyota TS030 just resulted in a trip up an escape road rather than a spectacular accident. For the first half of the race this car also had to contend with the #58 Luxury Racing Ferrari F458 until a heavy impact with the barriers resulted in the #58 cars retirement just after 2am.

In third place consistency and a smooth run with little trouble gave the #57 Krohn Racing Ferrari F458 a podium, driven by Tracy Krohn, Nicolas Jonsson and Michele Rugolo. The team were into the top six by the sixth hour and given their lack of major problems and smooth driving, mostly running alone secured them third when others fell away.

It was a thrilling and ultimately unpredictable GT race, with excitement from the opening laps to the very last. The favoured Pro class Corvettes and Porsches fell by the wayside, leaving two Ferraris to battle it out to the end.