G-Drive Racing by Delta-ADR had the fastest LM P2 class lap with the No. 26 ORECA 03 of John Martin, Mike Conway and Roman Rusinov.

After the first qualifying session for the 2013 Le Mans 24 Hours, cut short by a long red flag period, G-Drive Racing by Delta-ADR had the fastest LM P2 class lap with the No. 26 ORECA 03 of John Martin, Mike Conway and Roman Rusinov. Meanwhile, the team’s sister car finished the day in fourth place, three other ORECA 03 chassis were in the top ten, including the Alpine A450 – built and developed by ORECA. Qualifying will continue Thursday with two sessions of two hours each.

John Martin and G-Drive Racing by Delta-ADR on the provisional pole…
After a Test Day marked by difficult weather conditions, this year’s Le Mans 24 Hours competitors were counting on the first practice session to fine-tune their setups. The teams were forced to optimize their time on track as both the practice and qualifying sessions were interrupted by several red flag periods. 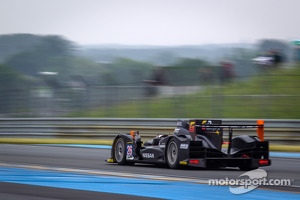 The seven ORECA 03 had a positive practice session in the evening, with close to four hours of track time despite two stoppages. At the end of the session it was Thiriet by TDS Racing with the second fastest time, with G-Drive Racing by Delta-ADR taking the third spot. After this first session, the teams crowded the pitlane to rejoin the track in the first moments of the qualifying session, with menacing clouds looming over the Circuit de la Sarthe. G-Drive by Delta-ADR did not miss a beat: driving the No. 26 ORECA 03 John Martin improved his time each lap to be the only driver in the LM P2 class to sign a time under 3 :40. The Australian would not be beaten this Wednesday night. « Honestly, I could have done an even better lap on my third attempt,» admits John Martin. « I didn’t drive very much during the Test Day and evening practice session. I’m still discovering several aspects and I’m using my experience from last year. The laptimes look good, but I think we can still improve the car for the race. That’s a good thing, because it means we still have a good margin for improvement.. »

In the hands of Shinji Nakano, the No.25 took the fourth fastest time. Teammate to Shinji and Tor Graves is the rookie Archie Hamilton, who was satisfied with the session’s outcome: « Shinji did a good lap and both cars are at the front. I hope they will remain there tomorrow. It’s my first time at Le Mans, so I’m learning a lot and there’s more to come. I’m enjoying my time behind the wheel of the car, which is handling well. It’s amazing to be here, and I’m hoping that we will have a good finish. »

Current FIA World Endurance Championship leaders Pecom Racing finished the day in sixth position with the ORECA 03 driven by Kaffer/Perez Companc/Minassian. The trio’s work was slowed due to an incident on the Mulsanne Straight. « I hit something, probably debris, and it broke the front brake » explained Nicolas Minassian. « It cut our momentum a little. Pierre was unable to get a clean lap and we still need to make a few adjustments to gain some top end performance. I’m confident for the next two sessions on Thursday. »

With a provisional seventh place time, Thiriet by TDS Racing had an off-track excursion that caused the final red flag session. Behind the Alpine A450 (eighth) and Murphy Prototypes (ninth), Race Performance finished the day in 11th position. The first day’s result remains positive for drivers Jeroen Bleekemolen, Patric Niederhauser and Michel Frey. « Across the three drivers, we are on the same page» said Michel Frey. « The car’s handling is good, even if we can still refine a few settings. We need to slightly stabilise the rear. We’re still missing a little something to go in search of the fastest time, but on average, we’re in the fight. » Boutsen Ginion Racing had the 20th time of the session.

Qualifying continues on Thursday from 7pm to 9pm, then from 10pm to midnight, to set out the final grid for the 2013 Le Mans 24 Hours.