The fastest GTE lap time of the three qualifying sessions – 3:54.635 – was set by Frédéric Makowieck

Le Mans, 21 June 2013 - Aston Martin Racing has qualified on pole for the 90th 24 Hours of Le Mans with its #99 Vantage GTE, as well as securing pole position in the GTE Am class with the #95 car to continue the team’s 100 per cent pole success rate in the 2013 FIA World Endurance Championship (WEC) season.

The fastest GTE lap time of the three qualifying sessions – 3:54.635 – was set by Frédéric Makowiecki (FR) in the final moments of the third qualifying session, following a close battle with team-mate Stefan Mücke in the #97 machine who took second position. The #99 Vantage GTE, which the Frenchman will compete in for this race with Bruno Senna (BR) and Rob Bell (GB), will start from the front of the grid of 26 GT cars for the legendary 24-hour endurance race.

In the GTE Am class, Allan Simonsen (DN) put the #95 car at the top of the timesheets at the start of qualifying one, a position that the car held right until the end of session three when Simonsen bettered his time to a 3:57.776. 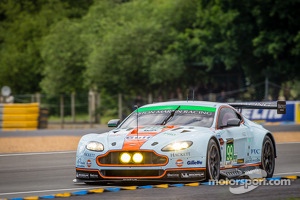 The #96 Vantage GTE Am car driven by Jamie Campbell-Walter clinched third place when the British driver put in a lap of 3:59.805 towards the end of the session.

The #98 Pro car will start from strong position of fifth overall on the grid. Pedro Lamy (PT) set the time in the first qualifying session and thereafter the team focused on maximising driver time in the fragmented sessions.

Aston Martin Racing Team Principal John Gaw comments: “We came here with the aim of qualifying on pole in both classes, so we are pleased to have started off our 24 Hours of Le Mans campaign so positively. The qualifying sessions were a little frustrating because of the rain and red flags meaning little changed position-wise until the final 15 minutes. We did well to firmly secure both pole positions in the dying minutes.

“We all know, however, that in a 24-hour race, starting positions aren’t too important. We need to ensure we continue the reliability that we demonstrated at Silverstone and Spa to get all our cars to the end of the race safely and without issues.”

Makowiecki comments: “It’s a nice feeling because I waited a long time to work with Aston Martin Racing. For me it’s a great pleasure to get a good result for the team. It’s the first step towards winning the race this weekend.”

Simonsen adds: “It was tricky at the start with the changing conditions and it was a typical Le Mans last lap dash. To start the 24 Hours of Le Mans on pole is fantastic. We’re all looking forward to the race."