American driver Dion von Moltke talks about his team heading to Le Mans, and what it takes to make it to the biggest race on the planet.

With news that Flying Lizard team owner Seth Neiman and team mate Spencer Pumpelly would be making the trip over the pond to participate in the 24 Hours of Le Mans with JMW, American sports car driver Dion von Moltke looks forward to finding his route to the big race.

Von Moltke is in his first full season with Flying Lizard Motorsports, his seventh full season of American sports car racing and says every driver has an urge to get to Le Mans. He has been racing sports cars since he was 17, starting his first Grand-Am racing in 2008 at Millville with Racer’s Edge Motorsports.

Neiman, who shares the #35 Audi with Von Moltke has been going to Le Mans for the past eight seasons with his own team but after not being invited in 2014, he found another way to get to France.

“It is the most historic and prestigious race in all of sports car racing and it’s very close to the top of the list for all of motorsports. Every driver, engineer, and team wants to get there and win. It’s the single best event for drivers and teams alike to show up and compete in the toughest environment against the best teams in the world,” said Von Moltke.

“I know how much both Spencer and Seth love Le Mans. They have been close to winning it before and I know they are psyched for the opportunity to go compete there again and determined to win it.” 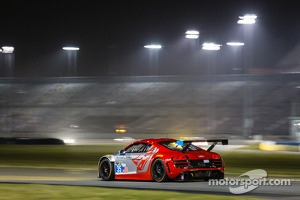 Von Moltke added that Neiman’s experience at the track will be valuable for the JMW team.

But the winner of the 2013 24 Hours of Daytona in the GT class will not only be cheering on his team mates overseas, but always looking for his way to get to the endurance classic.

“Getting an opportunity to race at Le Mans is not an easy task, there are very limited spots. As a driver you make a ton of phone calls really almost all year round, you try to network as much as possible at the track and meet the team owners who are taking their cars to Le Mans and are looking for professional drivers to drive their cars,” he said.

“With the majority of teams being from Europe and around the European drivers it is generally even more difficult for American drivers to find rides at Le Mans because they might not be as well known to the team owners in Europe. The dream for almost every driver is to go to Le Mans and drive for a manufacturer racing there and that might be the best way for Americans to find their way into a race car over there. “

Having one 24 hour win in his pocket, Von Moltke says he cant even imagine what a Le Mans win would mean.

“While just getting there is a big accomplishment all of us drivers dream about winning it. Winning at Le Mans would mean more to me than I could describe, that is why we push ourselves and work harder than we ever thought we could before.”