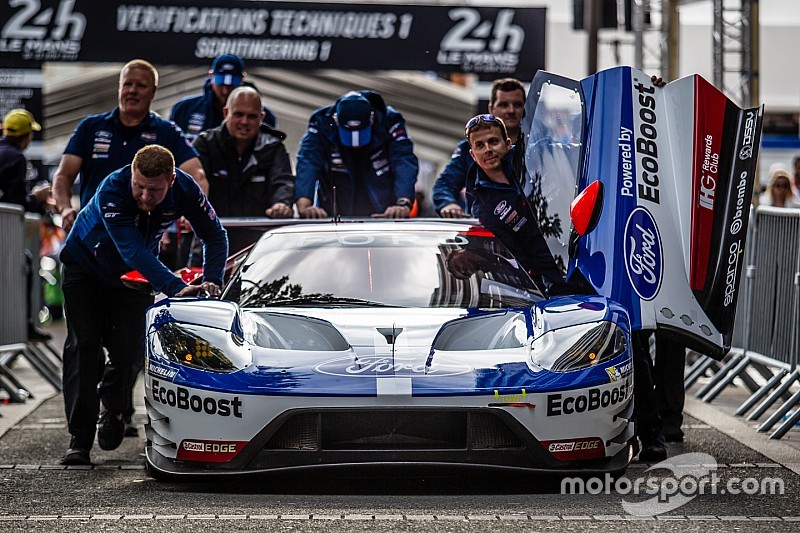 Corvette Racing driver Jan Magnussen believes that Le Mans 24 Hours rival Ford has been sandbagging ahead of the French sportscar classic to gain as much as possible from the Balance of Performance rules.

Speaking on Monday at scrutineering, Motorsport.com asked Magnussen if he believed Ford had been sandbagging with its new GT contender. “I’m 100 percent sure that’s what they’ve been doing,” he replied.

Last Friday, the WEC’s sporting regulations were amended with a raft of Balance of Performance updates specific to the 24 Hours of Le Mans – subsequent to last week’s Test Day.

Magnussen was unhappy that these changes have been made, as Ford received a further 5kg weight break – on top of its previous 20kg decrease before the test.

“Looking at the test, it’s hard to make it any closer than that,” he said. “I think it’s a mistake making changes after the test.

“Everybody was so close, within a second and a half. So pretty much by making changes they can only mess it up.

“There’s no way to make it better.”

Magnussen, who was forced to miss last year’s race after a huge crash in qualifying, believes Corvette has a solid chance of repeating its victory of 12 months ago when the sister car triumphed.

“Honestly, I don’t think we’ll be fastest, but I think we’ll be in with a good shot at a race win,” said Magnussen. “Last year was good for the team, with the win, but it was pretty heartbraking for me on the Thursday when we realised we weren’t going to get both cars on to the starting grid.

“The Test Day showed we are competitive, there is potential [to repeat the win] but all of us realise how tough a job it’s going to be.

“The competition in GTE Pro is fierce, everybody is super-close. It looks like the weather is going to throw something at us as well. We’ll try not to get caught up in too much crap early on, and be there at the end when it counts.

“The Test Day proved it’s our potential to run up front. We didn’t have any major issues, we weren’t super-slow on the straights, so I think we’ll be there or thereabouts.

When asked for a tip of who will be quickest on raw pace, he replied: “I think Porsche will be fastest, that’s my feeling.”

Touch down in Le Mans for Aston Martin Racing