Both Corvette Racing and Risi Competizione had points to prove and history to write for this year's 24 Hours of Le Mans. In both cases, it's mission accomplished. ...

Both Corvette Racing and Risi Competizione had points to prove and history to write for this year's 24 Hours of Le Mans. In both cases, it's mission accomplished. 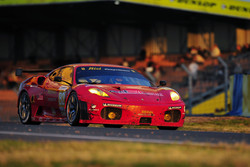 Corvette returned to the top of the GT1 class for the final time after two years of finishing second to Aston Martin's DBR9s, while Risi scored its second straight Le Mans win in GT2 and fourth consecutive major endurance race victory.

Corvette's incredibly successful ten-year period in the GT1 class with the C5.R and C6.R now culminates with a final victory in the C6.R's sendoff, the team's sixth at Le Mans. Risi adds this year's Le Mans victory to wins at last year's Le Mans and Petit Le Mans, and this year's 12 Hours of Sebring.

The golden yellow #63 Corvette C6.R driven by Johnny O'Connell, Jan Magnussen and Antonio Garcia has earned the final GT1 victory for the manufacturer, and potentially the last ever for this class.

"It's a very special win for us," O'Connell said. "Since the first time we came here, this is always the biggest thing as a team to compete against the world's best. If you win here, you did a perfect race."

GT2 saw Risi lead a series of Ferraris home to the finish after the fleet of Porsche 911 GT3 RSRs fell by the wayside by a myriad of issues. A banner day for the squad saw Mika Salo and Jaime Melo repeat their 2008 class victory and add Pierre Kaffer to the mix, giving the German his first win at La Sarthe.

"There was a lot more opposition this year, but a lot of them hit problems and only our car worked perfectly," Salo said. "It's a lot easier to win this race when you know how to do it. We had to go a little faster than last year."

For O'Connell, a New York-born Georgia resident with a southern twang and a knack for perfect timing, he achieves an incredible personal accomplishment as the first American to have ever won four times at Le Mans (1994, 2001, 2002). 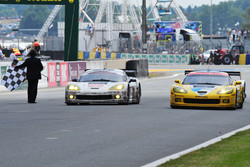 Magnussen also garners his fourth Le Mans win after three consecutive for Corvette from 2004-06. Due to food poisoning, the Danish hotshoe was sidelined the latter half of the race, costing Corvette one of its top pilots.

Garcia earns a sweep of last year's and this year's Le Mans in GT1, and to boot, his second 24-hour victory this year to go along with a win in the Brumos Racing Daytona Prototype at this year's Rolex 24 at Daytona in the Rolex Series.

"One of the greatest things about it is that I was able to run with two of the biggest and best teams here," Garcia said. "Everything ran perfectly."

In either case, the battle for the class victory was rarely in doubt these last 24 hours. Corvette's two factory cars ran 1-2 on the same lap for the first 21 hours, the #63 usually leading the sister (but black) #64 C6.R driven by Olivier Beretta, Oliver Gavin and Marcel Fassler.

The dream sendoff of a factory Corvette 1-2 went by the wayside in the 22nd hour when Fassler stopped on track with an apparent transmission issue. The pity was the two Corvettes had closed what was more than a one-minute gap down to just a few tenths of a second and were just starting to put on a decisive, no-holds-barred shootout for the final win.

Beretta would pass Garcia, and Garcia would return the favor. When those two got out it was "Johnny O" and the Swiss driver Fassler who did likewise. As the car stopped right before the pit lane it was able to be wheeled in for repairs, but all hope of victory or runner-up finish was lost.

The factory Corvette demise was to the benefit of the customer Luc Alphand Adventures squad and its young driver lineup. In an older C6.R, the #73 of Le Mans sophomore Yann Clairay and rookies Xavier Maassen and Julien Jousse finished second, albeit seven laps behind.

Otherwise there was not much to report from what was a depleted GT1 class. The second Alphand Corvette crashed at about 10:00 p.m., Patrice Goueslard going nose-first into the tire barriers at Indianapolis.

The two non-Corvettes were never going to be factors. The Jetalliance Racing GMBH Aston Martin DBR9 had all kinds of mechanical issues and finished 88 laps down to the overall winner, but it got a podium finish in class by default. The JLOC Lamborghini Murcielago parked after merely a warmup lap and a single timed lap.

GT2 started out as an incredible dogfight between the #82 Risi Ferrari and three of the five Porsches, the #77 Felbermayr-Proton, #76 IMSA Performance Matmut and #80 Flying Lizard Motorsports cars. Within the first couple hours a blanket could have covered the four, Melo leading in the Risi despite a lack of straight-line speed in comparison to the Porsches.

But suddenly, like flies, the Porsches began to drop out. The Felbermayr-Proton car wheeled by three factory pilots Wolf Henzler, Richard Lietz and Marc Lieb had a fuel pump fail just shy of the pit lane. The team attempted to go the reserve but that was not functioning properly. 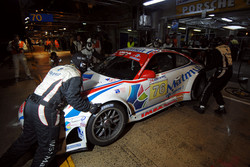 The Lizards were on pole and Joerg Bergmeister drove an incredible four-hour first stint on his own before handing to team principal Seth Neiman. But with Neiman driving the car fell down the order, then Le Mans rookie Darren Law had an incident in the 15th hour that ended the team's chances.

"I didn't expect to see the Porsches out so fast in the first few hours," Melo said. "But still, Risi Competizione was really prepared. We were really consistent and could triple-stint the tires, and had no issues."

With the Porsches out, Risi enjoyed a several lap lead over its closest competitor, the #97 BMS Scuderia Italia F430 driven by Italians Fabio Babini, Matteo Malucelli and Paolo Ruberti. The BMS car was the lone Pirelli-shod car in the field while most ran on Michelin tires.

The top two was a carbon copy of last year's result, Risi over BMS, save for Kaffer replacing Gianmaria Bruni. Risi's second car of Krohn, Jonsson and Van de Poele was third, improving from 13th on the grid and avoiding the pitfalls plaguing everyone else.

There was also that actor in the field -- Patrick Dempsey -- who did a more than adequate job on debut at Le Mans. He had several spins during the week but none in race conditions, stayed out of the way for the most part when being lapped, and most importantly kept the car on the road throughout the 24H.

He and co-driver Joe Foster had to pick up the slack as Team Seattle founder Don Kitch Jr. also encountered a bout of food poisoning late in the going, to accomplish the team's dream of raising as many dollars as possible for both the Seattle Children's Hospital. The team finished ninth in class and completed over 300 laps.

See also Peugeot comes through with a 1-2 Le Mans victory.

Peugeot comes through with a 1-2 Le Mans victory