LE MANS, France (June 20, 2013) – Qualifying is complete for the 90th anniversary of the 24 Hours of Le Mans with Corvette Racing firmly entrenched in what is its toughest fight at the world’s greatest endurance race.

The two Compuware Corvette C6.Rs will roll off eighth and ninth in the GTE Pro class at 3 p.m. CET/9 a.m. ET on Saturday following Thursday’s final qualifying sessions. Damp weather early in the first two-hour period hampered the team’s efforts to work toward improvements from Wednesday. The field did enjoy mostly dry running in the final period.

Oliver Gavin took advantage and improved the position and qualifying time for the No. 74 Compuware Corvette to 3:58.644. Antonio Garcia’s 3:59.526 from Wednesday’s session remained the best for the No. 73 Corvette. The pole time was a 3:54.635. 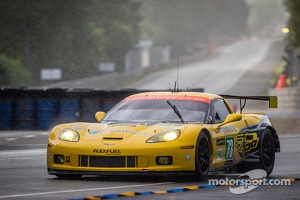 “The Corvette team is focusing on a race setup that will deliver the right combination of performance, handling, fuel economy and durability for this 24-hour race,” said Jim Campbell, U.S. Vice President, Performance Vehicles and Motorsports. “Add to that efficient pit stops, staying out of trouble and a little bit of racing luck, we can position ourselves to be up front in the GTE Pro class in the final laps of the 24 Hours of Le Mans.”

The focus now turns to final preparations for Saturday’s race start when Corvette Racing will go for its eighth class victory in 14 tries.

Jan Magnussen, No. 73 Compuware Corvette C6.R
“The conditions were quite tricky in the first session since half the track was wet and the other half was dry. I ran on wets just to get my five laps in. I do believe we’ve made some headway in terms of car handling but we’re still down on speed.”

Jordan Ttaylor, No. 73 Compuware Corvette C6.R
“I had a good little run, getting my five nighttime laps in to qualify for the race and I’m glad I did that without any mistakes. It was a bit tricky since the whole of the backstretch was wet and we were on slicks. That was my first time really experiencing that part of Le Mans, with the tricky conditions, so I’m glad to have gotten that out of the way and get a feel for the car before the race.”

Oliver Gavin, No. 74 Compuware Corvette C6.R
“We gained a second, and it will be interesting to see where we picked that up. We’ve been working hard the last day to put together why we are where we are and why we aren’t as competitive as we want to be. Yes, we made some gains. Fundamentally, we still have to find that main reason for the deficit to our competition.”

Tommy Milner, No. 74 Compuware Corvette C6.R
“You want to be competitive to run at the front, and we’re not quite there. We’ve improved the car handling-wise. Obviously faster is better than slower, so we’re going in the right direction. We are still working on it to find everything we can to find more speed.”

Richard Westbrook, No. 74 CCompuware Corvette C6.R
“We wanted to see how long the wet tire can last in changeable conditions. It started off really wet and dried off quite a bit. So we got some really good data. Michelin is a great partner and it looks like we were able to give them some great feedback. It also was good for me because I’ve been at Corvette Racing for three years and had never driven in the wet! But the main issue is still there, which is straight-line speed.”